“Someone had to take a stand” 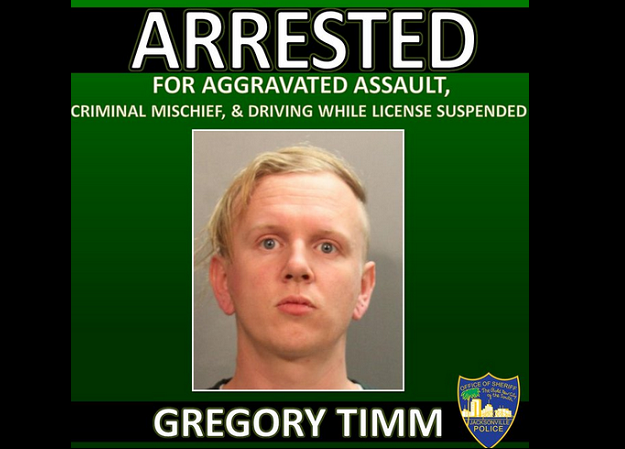 Timm drove a van into a GOP voter registration tent, which was set up in a Walmart parking lot. According to a police report, Timm saw people standing around the tent and furnished video leading up to impact. He was charged with aggravated assault, criminal mischief, and driving while driver’s license suspended.

I’m sure you’ll also be shocked to know that the attacker was motivated by dislike for Trump.

The attack on a Florida GOP voter registration tent was motivated by…exactly what you'd expect. From the police report: pic.twitter.com/xy1JhnYVXA

Readable to those other than ants: 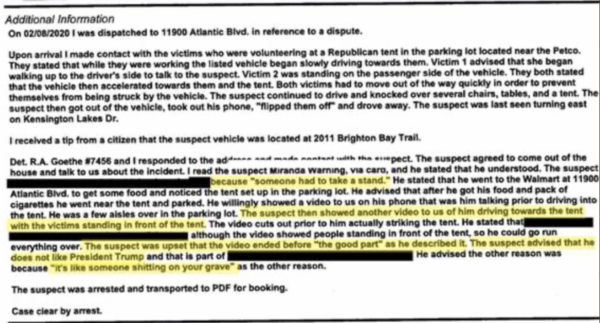 We all know the answer to this one:

Thought experiment: If it had been a MAGA hat-wearing Trump supporter who'd weaponized his pickup truck against Democratic campaigners, might we be engulfed in an angry "national conversation"/civility crisis/blame-fest? Gosh, I wonder. https://t.co/0edOw54sjX

I’d love to hear Joe Scarborough or Chuck Todd’s feeling about this incident. Are they stoking hate?

the MFM has embargoed this story, as it doesn’t fit their narrative.

but they aren’t biased! (just ask those brave firefighters!)

The perpetrator definitely has the Dem “Yes,I am a Mensa member” look.

Did you just say that Dem’s have high IQ’s?

I was a member of Mensa for quite a few years. I discovered that intelligence is not an indication of “smarts”, or of the ability to be illogical or analytical.

I got smart and resigned my membership decades ago.

I originally applied to Mensa just to see whether I could get in. I attended a few meetings and found that the people there all seemed not to know any other smart people in their mundane lives, and were desperate to meet other people like them and at least once in a while be able to have an intelligent conversation. Since I knew plenty of smart people I didn’t feel this need, so I stopped going to meetings, but I kept up my membership because I enjoyed the monthly magazine. But when I stopped qualifying for the student membership rate I decided that the magazine wasn’t worth enough to me to justify paying a full membership so I dropped out.

I’m not trying to degrade either of your choices/experiences, but a paid membership to feel smart just sounds like the same scam as greek life in college.

Both organizations CAN have benefits, but usually the cost outweighs the returns for the majority of members. No thanks.

I attended a few meetings many years ago. Most socially awkward group of people I ever met. After a guy tried to show me his ‘fencing moves’ and almost set my hair on fire with his cigarette, I decided it wasn’t worth the risk to keep going.

“Most socially awkward group of people I ever met.”

A joke I’ve heard a few times: “Mensa is for people who are not mature enough for sci-fi conventions.”

“…a paid membership to feel smart…”

A desire to have intelligent conversations is NOT the same thing as a desire to “feel smart”.

The perp has the looks that go well with someone singing “Tomorrow Belongs to Me”.

It would be a total waste of breath.

Hmmm – this was supposed to be a reply to dystopia’s comment:

“I’d love to hear Joe Scarborough or Chuck Todd’s feeling about this incident. Are they stoking hate?”

Here in Volusia County (we are just south of Jacksonville) certainly can identify with this. https://www.news-journalonline.com/news/20181029/republican-party-headquarters-vandalized-by-gunfire-in-volusia

This guy should be charged as an attempted First Degree murder with a weapon. This carries automatic life in prison. This violence by the left has to STOP!

He tried to “Heather Heyer” Trump Supporters. Shouldn’t he get life in prison for attempted murder, as well as for the “hate crime”?

The GOP voters stalked and opened an abortion zone, for purposes of empathetic appeal and journolistic narrative, which produced collateral damage when the target attempted to escape a clear and progressive assault and likely battery by a mob of [anti]fascists?

pro tip: your meds w*rk better when taken as prescribed, no matter *what* the voiced in your head say…

Are we to believe that this rather disjointed post is actually supposed to have ended with /s/ ?

This guy is insane and everybody that’s ever talked to him knows it. No need to drag politics into this story.

A contemplative cuckoo of the left-kind? Perhaps, there is precedent; but, the last known cuckoo who brayed attacked 50 shades of left, not right, or mostly center. Perhaps they have have evolved to become inclusive.

you mean the Bernie bot who shot up the House Republican softball team?

he’s all yours. wanna try again?

why not? the perp certainly did.

It’s questionable as to which CNN works hardest at – creating fake news or burying real news that makes the left look bad.

he ought to be facing charges of attempted first degree murder…

Multiple charges of attempted first degree murder. There was more than one person in that tent.

Surprised we haven’t heard from the democrat media bunch about a group of old people who attacked an innocent van with a shy but appealing young man going about errands for his crippled great, great grandmother.

It’s not like Covington Catholic, where boys were actually wearing “Make America Great” hats. That was lead story stuff.

The key or at least a major key, is in the sentence in the report: “The suspect advised that he does not like President Trump and that is part of [several words censored here].”

If he is affiliated with a Leftist group whose name has been deliberately censored . . .

I am assuming that the Left is covering its gluteus maximus.

notamemberofanyorganizedpolicital in reply to Subotai Bahadur. | February 12, 2020 at 9:33 pm

Anti-Trump Antifa Thugs Are Soon Going to Find Out What People Are Like When They Stop Being Polite and Start Being Real…..

Meanwhile, the NeverTrumpers have invaded the Democrat Party to save it from Socialism, but they’re not being greeted as liberators:

funny how an exiled GOP faction that couldn’t field a full softball team thinks they get to do anything more than vote for the democrat they get, and if that’s a bitter pill to swallow, wash it down with a pail of…..

According to the Gospel of Wikipedia:

A hate crime (also known as a bias-motivated crime or bias crime[1]) is a prejudice-motivated crime which occurs when a perpetrator targets a victim because of their membership (or perceived membership) in a certain social group or race.

How about including the MAGA social group? God knows we are under physical assault.

Exactly. If we were still a nation of laws, this would be charged as a Hate Crime.

But, the 14th Amendment simply gets ignored, as usual.

Hate Crimes are only ever prosecuted when the victim is a member of the liberals victim hierarchy AND the attacker is not a “minority”.

That is simply not true. They get prosecuted regularly and routinely.

Wikipedia doesn’t define our laws. Whether a crime can be charged as a hate crime depends entirely on the state’s hate crime statute, if any. Florida’s statute covers crimes committed out of prejudice based on the victim’s “race, color, ancestry, ethnicity, religion, sexual orientation, national origin, homeless status, or advanced age”. Political opinion is not covered, so under Florida law this does not count as a hate crime.

By statute, you are correct. That does not mitigate the reality of the crime, the bias, nor the hate that should be recognized and addressed by a “tolerant” society. One can dream.

By statute, you are correct. That does not mitigate the reality of the crime, the bias, nor the hate that should be recognized and addressed by a “tolerant” society. One can dream.

This guy’s actions rest squarely in their smelly laps.

No, it is not incitement. The legal definition of incitement is very narrow and precise.

You know you’re no match for Captain Know it All.

Agree on the legal definition, but I think there is also an everyday definition: when people endlessly proclaim that Jews are poisoning Muslims, or racists say that whites are all racists conspiring to oppress blacks, or conservatives are ditto the working class, one of the intended results of such speech is to make it increasingly impossible for the target groups to live in safety.

Indeed, but such speech is protected by the first amendment, and cannot be made illegal.

Indeed. All we can do is try to make it socially unacceptable, as unacceptable as being fond of the KKK.

Poster boy for the Slack Jawed Yokels of America. These leftist kids are so loony it’s scary. We need to be protected from the likes of him. And they wanna take our guns away.