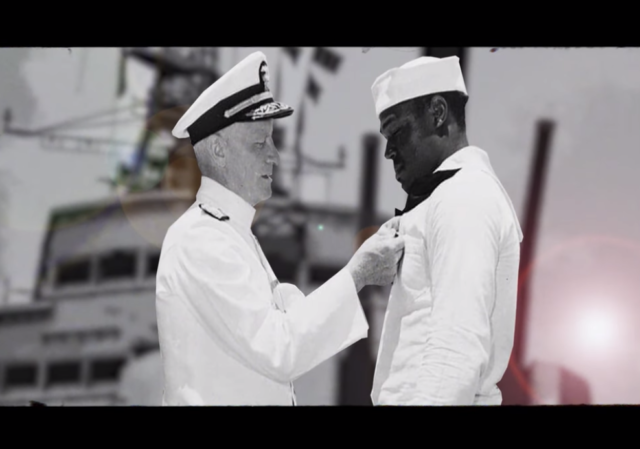 On Martin Luther King, Jr. Day, the Navy is expected to announce a new aircraft carrier to be named after Mess Attendant 2nd Class Doris Miller, Pearl Harbor hero and the first African American to receive the Navy Cross for valor.

From the Star Advertiser:

On Martin Luther King Jr. Day, Monday, at Pearl Harbor, the Navy is expected to announce that a $12.5 billion aircraft carrier will be named after Mess Attendant 2nd Class Doris Miller, the first African American to receive the Navy Cross for valor for his actions on Dec. 7, 1941, when he manned a machine gun on the USS West Virginia to fire back at attacking Japanese planes.

“I think that Doris Miller is an American hero simply because of what he represents as a young man going beyond the call of what’s expected,” said Doreen Ravenscroft, president of Cultural Arts of Waco (Texas) and team leader for the Doris Miller Memorial.

In 1941 an African American was not allowed to man a gun in the Navy, and as far as rank was concerned, “he could not really get above a messman level,” Ravenscroft said. Miller’s actions started to turn the tide, she added.

…“In the end, the fact that he didn’t think about what could be repercussions — that wasn’t a thought when, at the time and in war, he did what was needed in his way to defend the United States of America,” she said.

He will be the first African American to have an aircraft carrier named after him, according to Navy records. The big ship is not expected to be home-ported in Hawaii.

Two of Miller’s nieces are expected to be at Pearl Harbor for the announcement, including 66-year-old Flosetta Miller.

Far more deserving than another politician.

Contrast this with the Navy’s deranged decision to name a ship after Harvey Milk, a pederast who drove one of his victims to suicide:

This naming was in July 2016, a last-minute case of virtue-signaling by the Obama administration. They probably hoped to nail down the gay vote for Hillary.

But remember that the USNS Harvey Milk is an OILER. That seems appropriate, and mitigates the insult of naming a ship after Milk. He was certainly an oily character, and there are are all sorts of salacious implications of having an oiler named after you.

(Sorry, I missed the “Reply” button and hit the thumbs down. Should have been a thumbs up.)

Oh, you mean Slimey….. Like a San Fran and DC Swamp Critter we all know……

Should have designated it as the K-Y tanker for the Port of San Francisco.

Good choice. It recognizes the substantial and heroic actions of a patriotic American in the Navy. It also underscores the major contributions and sacrifices that Black Americans have made for the US military services.

I smell pandering. Sad to use Navy sailors like this.

Pandering????? Naming an aircraft carrier after one of the many first American heroes of WWII is pandering?????

Or, rdmdawg, did I misread what is really fantastic sarcasm?

It’s not pandering. In 1972, a Knox class Frigate was named for Doris Miller. While the rest of the country may have forgotten Miller’s heroism, the Navy did not.

I have to disagree. The man earned a Navy Cross. Nothing unusual about naming a ship after a Naval Hero.

It’s about time they name these after men that had skin in the game, not some politician.

American, black American if his name is not known. No more 1/2 Americans. It’s time to mitigate progress.

It is clearly a symbolic gesture (“pandering”), that I believe departs from past standards. However, your criticism is valid, and there is a substantial basis.

We can only wait for the USS obama, the first American warship to fire on Americans.

it’ll be in a good position, leading from behind (the rest of the ships).

At least it can rely on michelle obama for ballast.

” pandering ” is a stretch–the photo depicts a SAILOR who, after rescuing many shipmates wounded in the attack and with his ship sinking beneath his feet, manned a weapon and FOUGHT BACK

More good reading on this here.

In a statement, the U.S. Navy wrote:

This is a well-deserved honor. Miller gave his life for his country when his ship was torpedoed by the Japanese a year after Pearl Harbor.

It unique not only because Miller was black, but also because he was an enlisted man. I saw the movie “Tora, Tora, Tora” on Turner Classic Movies over the weekend for the 73rd time on Saturday. The movie was produced in 1970 and showed Miller manning a machine gun.

The modern ‘elite’ in this country, as we have discovered, are a rather slimey and often treasonous group of people.

Can anyone imagine any of them deserving a warship named after one of them – other than Trump, or some of the conservatives in congress?

that treasonous rat obama couldn’t walk in Doris’ shoes, yet we elected him president, partially as a statement.

We saw how that worked out.

But even Doris would have been a better president. Ironically, obama is not even qualified to do navy messman work.

(Btw, imagine if obama was at Pearl Harbor when the bombs started falling? He would have ran. And it would be later been discovered that he was somehow complicit in the attack. Or maybe he would have been in the brig, having have been court-martialed for stealing.)

Good deal. Many deserve the honor, but none anymore than Doris Miller.

He was heroic, but then, there were many who were more heroic, and will never be known outside the military:

I am a purist when it comes to ship names. If the Navy wants to honor Miller, name a Burke-class guided missile destroyer for him. Destroyers are traditionally named for Navy and Marine Corps heroes or prominent civilian Navy officials, like former secretaries of the Navy.
No more naming carriers for politicians. After Enterprise (CVN-80), return to traditional carrier names: Lexington, Saratoga, Ranger, Constellation, et al. Those names are a proud part of naval tradition.
And, while we’re at it, I would go so far as to rename the John F. Kennedy (CVN-79, under construction).

“No more naming carriers for…”

That ship has left the dock, but I’m with you on that.