“If you find it too annoying or frustrating or uncomfortable to sit for eight hours and listen, you can resign tomorrow and go get another job.” 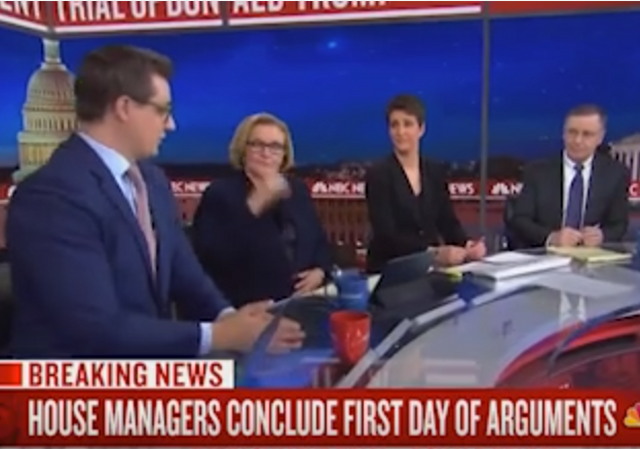 If you’ve watched any of the impeachment trial on TV this week, you know that it’s been an incredibly boring affair. In spite of this, the hosts at MSNBC, who are deeply emotionally and professionally invested in the outcome, are annoyed that members of the Senate aren’t sitting on the edge of their seats.

Chrissy Clark writes at The Federalist:

Towards the end of night two of the Senate impeachment trial, the Washington Post reported Sen. Dianne Feinstein, D-Calif., left the trial over an hour before its conclusion.

On Wednesday, MSNBC Hosts Rachel Maddow and Chris Hayes criticized senators who left the impeachment trial early, questioning their devotion to their country.

“We also live in a country in which we ask every citizen to serve on juries. Most of those people have other jobs they have to take leave from. If the trial goes for a long time, often they don’t collect their paycheck from that and are given a meager amount of money relative to what some of those people might make,” Hayes said. “These peoples’ job is to do this. This is literally their job. If you find it too annoying or frustrating or uncomfortable to sit for eight hours and listen, you can resign tomorrow and go get another job.”

A similar thing occurred at CNN where not sitting still and listening through the entire session earned an on-air scolding from the news desk:

What does it say about this impeachment effort, that members of the media are angry with senators for not being as invested in it as they are?

Ed Morrissey of Hot Air makes a good point about the age of many of these people:

On the other hand, allowances must be made in a gerontocracy, buddy. If we’re going to elect octogenarians to Congress — and we do, routinely — then we can’t complain when sleepy time interferes with their duties.

Of course, senators are not the only ones who are tuning out. If you’ve been following this on cable news, you have probably heard people talking about the sagging ratings. Joe Concha, the media reporter for the Hill, recently pointed this out on Twitter:

Primetime numbers from last night on impeachment are really telling in terms of American apathy/fatigue/frustration of the whole process as we move to the Senate: Total average viewers from 8:00-11:00pm: Fox News – 3.51 million; MSNBC – 2.53 million; CNN – 1.51 million.

It’s rather ironic that people are concerned about ratings, isn’t it? It reminds me of the episode of the Simpsons where Homer becomes an astronaut. At one point, the folks at NASA become panicked about their current mission and it turns out it’s all about TV ratings:

This all serves as a reminder that people who live in the DC/media bubble forget that average Americans often have very different priorities than them.

So she plans to appoint the Village People to show her “connectedness” with ordinary folk like us. Her hole is never deep enough so she keeps on digging. At some point she’ll be so deep people will forget there is person down there and declaring her hole to be a public nuisance, will order it filled.

Sorry, I thought I had posted this to the Fauxcahontas story.

Yes it does. It’s a subject worthy of Disqus-ion.

It should speak to the clearness of your argument that when I read it I knew exactly what you were referring too even though its posted on the wrong article.

My thoughts and prayers are with the people at MSNBC. May they get the therapy they so desperately need.

Or at least get the grape koolaide

I read the LMAO thread on Doomsday about how the Impeachment has moved to clock forward further than the Cuban missile crisis.

That story and this one makes me think that the Democrats are the Jackasses of the Apocalypse. Forget the four horsemen – that is too lyrical. Instead the world will end in a horde of biased intolerant racist elitist self entitled Democrat jackasses squealing their lies and BS. This needs to be a tshirt or a Branco cartoon.

That “clock” has always been BS, from the day it was invented. It’s set by the left-wing Bulletin of the Atomic Scientists, based entirely on their political convenience.

Great perspective on the Doomsday Clock by xkcd:

Is it in fact a rule that senators are expected to sit through the whole thing? The analogy to a jury in a court trial doesn’t convince me; this is a fundamentally different process and there’s no reason the rules should be the same. In a court trial every one of them would be excluded from the jury because they know too much about the case, and because they have already reached at least a tentative conclusion. They are certainly not expected to judge the case purely on the evidence presented. So I don’t see why they need to be there the whole time, unless there’s an actual rule, that they adopted, saying so.

Also, this is not “their job”. They have jobs, for the people, that still need doing.

According to CNN:
Senators typically able to come and go when they please at the Capitol have been subject to a number of constraints during the trial.
There are rules against talking and a ban on electronic devices on the floor. Official decorum guidelines for the trial released by Senate Majority Leader Mitch McConnell and Senate Democratic leader Chuck Schumer’s offices also say that “senators should plan to be in attendance at all times during the proceedings.” The official guidelines don’t explicitly say that senators must be seated at all times, however.
https://www.cnn.com/2020/01/22/politics/impeachment-trial-senators-sitting-walking-around/index.html

Someone should tell the MSNBC propagandists to get a life.

They think their life is to run your life — spending your money, telling you what to think and what to do and who to vote for, etc.

Because the Senate is merely a rubber stamp of approval for the almighty House.

I have an issue with that guy Ed Morrissey:

These people are lawmakers, they are our representatives. SMH.. Maybe they think they are rulers, that could be a big part of the problem.

I love it when Maddow’s kid sister opines!

I’m reasonably confident that nothing presented in this circus is going to change any Senator’s mind, so if they want to tune out or bug out I won’t hold it against them.

If the vote to convict exceeds 47, I’ll hold it against votes #48 and up, but that’s a different matter.

But, but these PMSNBC toadies are weally, weally mad!

I might think Feinstein’s early exit signals her disgust with the process/presentation(s) and telegraphs her eventual vote. But still I imagine she’ll vote party line to convict. How I’d like to see a Dem or 2 break rank and vote to acquit – besides Manchin.

The funniest part is how low the other networks are for this crapshow.

This is their big candy to report on and not even their own loyalists believe them any more. Fox News has the most acquit-friendly audience and they are outpacing the other networks by far!

Cue more calls by the losers of the ratings war to claim that Fox isn’t fair and should be silenced for “partisanship” or “state-run media” or whatever false crap they gin up next.

LOL! MSNBC is locked in a battle to the death with CNN to be the most ludicrous, fraudulent shills stinking up the airwaves…

The rejects table crowd wishes they could pander as well as their lefty heroes to get a cushy legislative gig.

That’s what this reeks of to me. “Put me in coach…I just care more!”

Is Hayes a queer?