“We have reached out, I think, more than once, and we received no explanation.” 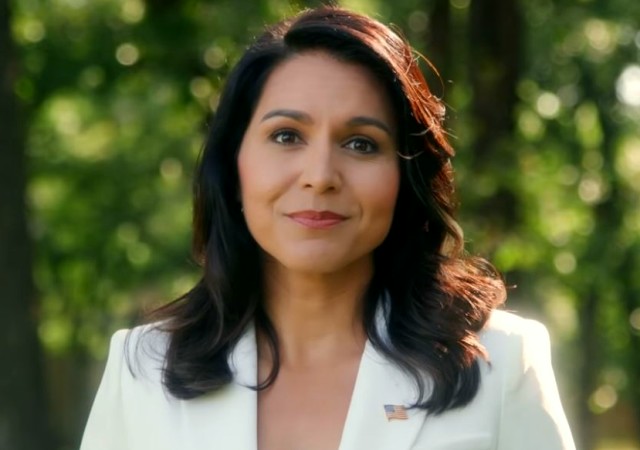 CNN is holding a series of town hall events with Democratic candidates ahead of the New Hampshire primary. For some unknown reason, the network excluded Tulsi Gabbard.

This would be understandable if CNN were following some threshold rule, like the ones the DNC is using for primary debates, but they’re clearly not doing that because the two-night event is including lower polling candidates like Andrew Yang and Tom Steyer. Even Deval Patrick, who barely registers in the polls, is invited.

Joe Concha writes at The Hill:

Democratic presidential candidate Rep. Tulsi Gabbard (D-Hawaii) says she’s received no explanation or response from CNN regarding not being invited to a series of town halls the network is hosting in New Hampshire days before a crucial primary there in February.

Gabbard is currently polling at 4.8 percent in the RealClearPolitics index of polls in New Hampshire, ahead of tech entrepreneur Andrew Yang, businessman Tom Steyer and former Massachusetts Gov. Deval Patrick.

“We have reached out, I think, more than once, and we received no explanation,” Gabbard told Fox News on Tuesday.

Gabbard addresses the issue in the video below:

Asked about not being invited to the @CNN town halls next week in NH, @TulsiGabbard tells @foxnewspolitics “we received no explanation. I don’t even think we’ve gotten a response to date about why they’re excluding the first female combat veteran ever to run for president” #FITN pic.twitter.com/njxusUoXWt

FOX News has more on this:

Gabbard’s numbers in national polls and in Iowa, which holds the first contest in the presidential nomination calendar, are in the low single digits. But in New Hampshire — where the candidate is spending almost all of her time on the campaign trail — she’s at 5 percent in the latest RealClearPolitics average of the latest surveys in the Granite State. That’s ahead of Steyer and Patrick, who were both invited to the town halls…

In the interview, Gabbard committed to staying in New Hampshire through primary day. She said that she would be in the Granite State rather than in Iowa on Feb. 3, the night the caucuses will be held.

“I’ve spent a lot of time in Iowa earlier on in the campaign, and we are here in New Hampshire for the duration all the way through election day on Feb. 11,” she said.

Between this and the apparent assist CNN gave Elizabeth Warren against Bernie Sanders in the last debate, it’s hard to dismiss the idea that the network is trying to manipulate the Democratic primary.

If they don’t invite her and she doesn’t go for that reason, it shows weakness on her part. She ought go anyway and take her own camera crew. Attempt to gain entry to the event, film the result and broadcast it far and wide. How would the DNC/CNN try to spin the security at the event man-handling a female combat vet?

Clearly they’re not playing by the rules, why should she?

Her choice seems to be lead and fight, or accept the mistreatment and whine about it.

CNN got confused … thinking she’s a Republican … because she’s pretty hot looking. CNN is used to democrats looking like Cankles and the Indian.

I bet the DBC screwed her over, that CNN is simply following their directions.

CNN is called the Clinton News Network for a reason.

Since she’s the sanest Democrat running, which isn’t saying much, they don’t want her to get any traction.

She checks all the right boxes for all the left’s reasons. She’s a clear threat but she’s still a loon.

notamemberofanyorganizedpolicital in reply to My2centshere. | January 30, 2020 at 12:50 pm

Make no mistake, she’s as Leftist as Bernie and Warren.

stevewhitemd in reply to notamemberofanyorganizedpolicital. | January 30, 2020 at 1:33 pm

She’s about as Left as Sanders and Warren, but more pragmatic about how she’d do it. For that reason she’s an alternative if the DNC succeeds in trashing Sanders. The DNC doesn’t leave these things to change if they can help it, so as they work to trash Sanders, they’ll take out Gabbi and likely Warren as well. I suspect that is what is going on here.

notamemberofanyorganizedpolicital in reply to stevewhitemd. | January 30, 2020 at 1:54 pm

Gabi will have the most “distinct” “product differentiation” among the DEMS perhaps…….. “I Sued Hillary Clinton.”

Comrade Fudge has the details

notamemberofanyorganizedpolicital in reply to RedEchos. | January 30, 2020 at 2:42 pm

36) I give up. Literally less than a half hour of looking at her voting record, looking at her current stances, looking at how her stances flail wildly over the course of 4 years, she looks like a crazy person who’s full socialist in all but name.

In other words, a Democrat.”

Comrade Fudge
@HNIJohnMiller
·
What the flying f*** is up with all of you Tulsi worshippers? Seriously, what the f***?

You see a Democrat who hasn’t gone full Mussolini and you think she just walks on water? Do a bit of f***ing research on her before you… you know what, no, f*** this. It’s time. THREAD TIME.

Veterans are a disadvantaged group like women. That’ll sell.

The other girls in the club are bow-wow. And they’re like super jelly because she isn’t.

They whine about Biden being the only moderate candidate, but Trump is right. She is the only threat.

Gabbard has burned the last bridge with the DNC by suing HRC for $50M. The reason she is treated like a leper by CNN is not that hard to decipher.

The thing is, I would not mind an afternoon conversation with her. I think she would be an interesting friend. The rest of the candidates come across as dishonest, condescending and not nice. I am not saying I would vote for her, just saying she seems like someone I *could* like as a friend.
And for that reason, I am glad the DNC is blocking her – I think she would be a threat to Trump, and I don’t want her for president. But I do think she would be a better president than anyone else the left is running

Is she really a “combat” veteran? From what I’ve heard she is in combat support not combat.

Interesting question, but I would think combat vet would extend past 0300 or 11B like we thought in the past century. Unless she was an actual REMF with cold beer and a pet monkey, she would fill my description of a combat vet even if I have the tee shirt that says if you are not a grunt you are just support.

Combat Arms occupation or not, 20yrs ago we used to say that if u hadn’t personally taken (& hopefully returned if possible) direct fire you hadn’t been in combat- regardless if you’d been in a location that received enemy fire to some area at some time.

Being female and/or having combat experience are not qualifications for POTUS. However, I appreciate her service.

She is a military officer, a congresswoman, and a proven hack-slayer. (RIP kamala harris.)

Her core beliefs are liberal, so she can never be trusted with certain power, but she is the best of the worst. She is light years ahead.

notamemberofanyorganizedpolicital in reply to TheFineReport.com. | January 30, 2020 at 12:55 pm

Definitely not trusted with the current construct of the DEMs and their Deep State governments at all levels in the U.S.

Yes, there is that much to recommend her over the rest of the socialists so preferred by the media.

Slaying Harris was a blessing to everyone!

Suing Hillary is also amusing, now that Hillary has refused to accept service. Hillary is very special, not at all like an American.

who watches cnn, if she went on fox at the same time she would get a bigger audience

Odd. For such an ‘inclusive’ party, the Dems sure are exclusive.

notamemberofanyorganizedpolicital in reply to locomotivebreath1901. | January 30, 2020 at 12:56 pm

They are a mafia. Literally: stealing, bribing, killing – as bad as gotti, only bigger. At least gotti never committed treason. (Then again, he never had the chance.) Only ‘made’ people get inside big DNC power.

Obama was the last made member.

Then, there are their associates in the GOP, who toady to them. Romney, mccain, flake, corker, murkowsi, etc

Can’t they just leave them at her favorite liquor store?

She’s not even moderate. She’s as leftist as the rest

Politically, she’s Kelly Ayotte with fewer friends and even fewer donors. Neither side trusts her.

She just found another victimhood label to carve out.

Gabbard is giving Crazy Lizzie a run for the money on who’s full-blown crazy!!!!!

We got Crazy Lizzie on “tape” edicting this.

she could pick Meredith Raimondo

When all of the Dims started their Presidential runs she was the one I was concerned about. Like the others she is as far left as they come but she is easy on the eyes, military service, and could talk a good game.

She is not toeing the Pelosi party line and has made herself a candidate to Epstein herself with her lawsuit against Hillary. To commit total political suicide she now needs get pregnant and refuse to get an abortion.