Painter once served in the Bush administration, so he’s one of cable media’s favorite anti-Trump flamethrowers. 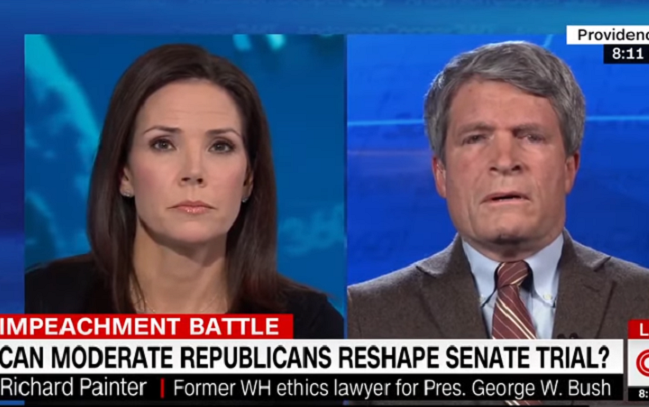 It’s been a while since we’ve written about anti-Trump #Resistance activist Richard Painter. You may recall that he took over David Brock’s position as Vice Chair of Citizens for Responsibility and Ethics in Washington (CREW) and has been a frequent and vocal critic of President Trump.

The leftstream media loves to trot him out every so often because before becoming a Democrat Painter served for two years as President Bush’s (43) Chief Ethics lawyer. That’s the part of his resume that is foregrounded in leftstream print media and that typically runs in the chyron on television.

When trotted out, Painter says the most bizarre and outrageous things:  he called illegal alien detention centers “concentration camps,” peddled some bizarre conspiracy theory about Justice Kennedy’s retirement, and five months into Trump’s presidency proclaimed him a “Russian agent.”

You can read more about Painter’s past ravings in Professor Jacobson’s post entitled “Stop taking Richard Painter seriously given history of outlandish statements and treason accusations.”

For some reason the left just can’t understand why their token #NeverTrump and progressive (former) Republicans don’t move the needle with normal Americans who support Trump or with Republican voters.

It’s really not hard to grasp, however.  Here’s another prime example of exactly why their pet Republicans (and Painter’s not even a Republican anymore) fail to change a single mind about Trump.

Painter, appearing on CNN this week, declared that Senate Majority Leader Mitch McConnell “may think he’s a judge impaneling an all-white jury for a Klansman trial in Mississippi in 1965. That’s not the kind of trial we have.”

Richard Painter had said Thursday that McConnell’s announcement that he will conduct the Senate’s impeachment trial of President Trump in “coordination” with the White House is akin to a judge empaneling a Caucasian jury in a KKK case.

“For Mitch McConnell to say he’s working with the White House [and] coordinating with the defendant in this trial — before the trial has even begun — is atrocious,” said Painter, who in 2018 ran for office in Minnesota under the Democrat-Farmer-Labor Party banner.

“He may think he’s a judge empaneling an all-white jury for a Klansman trial in Mississippi in 1965. That’s not the kind of trial we have,” Painter said.

Former Pennsylvania Sen. Rick Santorum — appearing on the CNN panel with Painter — interrupted the attorney to call his claim “absurd.”

He certainly knows his—and CNN’s—audience.  If you can’t invoke Hitler, go for the race card. Nevermind that Trump is not facing impeachment articles even vaguely related to racism.  For the regressive left, everything is always about race.  Everything. Always.

If CNN is giving this loser air time why are you wasting print space on him? You realize that at the current pace LI will soon have a larger audience than CNN.

There is something to be said for ignoring fools. Marginalize peaple who spout nonsense. Eventually their stupidity will fade into the background noise. (Sort of like CNN in airport lounges.)

notamemberofanyorganizedpolicital in reply to Shadow5. | December 28, 2019 at 7:07 pm

He’s a RINO and an Ever-Rumper!

Let him go to Obama!

notamemberofanyorganizedpolicital in reply to Shadow5. | December 28, 2019 at 7:08 pm

RE: “There is something to be said for ignoring fools. Marginalize peaple who spout nonsense. Eventually their stupidity will fade into the background noise.”

That’s the only way to handle non-life threatening psychopaths….

Great point, but we ignored them for decades and look what that got us. Lefties are winning the culture war because we choose the high road and ignore the crazies.

That’s not been a winning formula. Let’s try shining a bright light on the crazy . . . it may not work, but pretending it doesn’t exist or is “beneath” us doesn’t work, either.

But often you have people reporters tout as Republicans, or longtime Republicans, without any evidence that they ever were that. Painter seems to be such an example. When exactly was he a Republican?

Looking at his Wikipedia entry I see that his earliest activism was to oppose Reagan, to support Mondale, to found a Democrat student newspaper. Then I see that in 2017 he claimed to have been a Republican for 30 years, which would indicate a change of heart in the late ’80s. However not only are no examples cited of his activities from that time, but elsewhere in the same entry he laments “the Republican Party’s move to the right since 1980”. So in 1980, when the Republicans were sufficiently to the left, he was a Democrat; then in the late Reagan years, when the party had moved significantly to the right, he… became a Republican?! I’m not buying it.

I agree. He is an intellectually weak crank. The Senators are chosen by the electorate, not the Party or McConnell. The man is an embarrassment.

The answer is he lies, like all progs. Everything is made up and dishonest.

This guy is scarily creepy. His looks are bad enough, but there is a total absence of thought reflected in his dead eyes as well as all of his statements that I’ve heard.

WP links to this interview from which it appears that Painter has never in his life held a Republican position on any issue.

He claims to have signed up to be a member of the Republican Party when he became a professor in suburban Illinois simply because that was what people did at that time and place; I take that to mean simply that he registered to vote in Republican primaries, which is a very different thing indeed.

It is unethical to make an accusation of misconduct, when there isn’t a shred of evidence to support it.

Richard Painter has failed a test of decency, like Adam Schiff and Nancy Pelosi, before him. If he has some evidence of misconduct on the part of Mitch McConnell, then he should present it, or STFU.

Mitch McConnell is Majority Leader of the United States Senate, which is by definition a political body. Because he is from the same party as the President, he is naturally expected to co-ordinate with the President about the “impeachment” “proceeding,” should the Senate decide to take it up. Indeed, it would be strange for him to fail to do so.

The failure of Adam Schiff and Nancy Pelosi to make a prima facie case for impeachment is not McConnell’s problem, and he is under no obligation whatsoever to satisfy them or help them out, Richard Painter’s babbling to the contrary.

Is that a wig on Painter’s head or a weasel nest? Okay, enough of my petty personal attacks!

I bet Painter’s got a blackface portrait in his distant past.

“He may think he’s a judge empaneling an all-white jury for a Klansman trial in Mississippi in 1965.”

That was the Democrat Party — judge, jury, and defendant.

I thinkfrom here on out all articles based on fake news should co e with a warning that what one is about to read has no factual basis in truth or reality.

LOL, we kind of thought the headline was inclusive of such a warning. 😛

These “never Trumpers” are the most danagerous of the rats in the swamp/left/islamic axis: they’re hiding behind the bogus title of “Republican”.

And rats they are.

He uses his tongue as a brush

No president in US history could pick losers like Bush43.

Perhaps Painter, or someone else, can explain why Joe Biden’s Influence Peddling should not be investigated.

Tucker Carlson had a lot to say about the state of not only the GOP (and Republicans like Painter and his ilk) but just about everything wrong and becoming better with America.

This is exactly why I am an unaffiliated independent (temporarily registered as Republican but only for the primary) who eschews labels like “conservative”. Read it to understand. Best summary I have ever read.

See my earlier comment. I see no evidence that Painter was ever a Republican.

Saw it. Interesting. That places him in a subcategory among the RINO Bush crowd, a Democrat In Republican Trousers. Pretty much the same thing as we have learned. They are all Democrats.

No, I meant what I wrote: I see no evidence that he was ever a Republican at all. In name or any other way.

That’s pretty much what I am saying. Being a subset of the Bush crowd without ever being a registered Republican amounts to the same thing. Was there anything about the Bushes that made them Republicans?

Bush 41 fumigated the entire party, not just the White House, of anyone associated with Reagan on day 1. Bush 43 delivered on Ted Kennedy’s two central issues: No Child Left Behind and the Medicaid Part D entitlement. And he made sure our borders were totally out of control.

I see no evidence that the Bushes were Republican either.

Painter was not in the Bush crowd. He was a lawyer the White House Counsel’s office hired. The job was not political, so they may not even have bothered asking for his political views.

The Bushes were definitely in and a central part of the Republican Party. Agree with them or not, like what they did or not, you can’t deny that their political affiliation was definitely with the GOP and not with the Democratic Party. In Painter’s case I do deny just that.

Maybe try fixing your own “whiteness” first before shooting your mouth off.

Since this isnt year zero, you have to ask yourself where was this detritus during the Clinton era. I get sick of even entertaining the lame premise of white this or that. If that’s your argument you might want to shut your gob.

Here’s another example of the same phenomenon. This person doesn’t claim to be a Republican, but he claims to have voted for Trump in 2016. But he’s lying, and his entire claim to fame is a con.

McConnell did not select the jurors, the voters did.