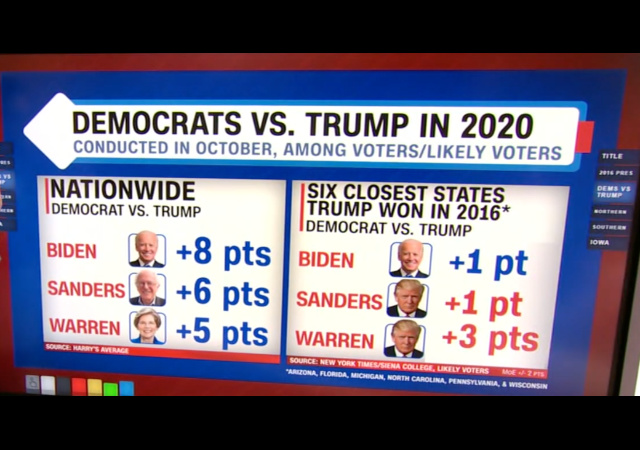 The results come from surveys taken by The New York Times Upshot and Siena College. They interviewed 3,766 registered voters.

I noticed the New York Times led off with registered voters, which shows a tight race. But when you look at the likely voters, Trump fares a lot better. 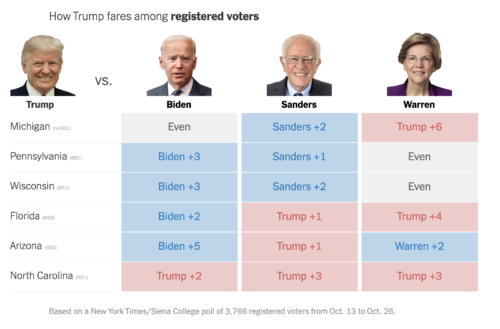 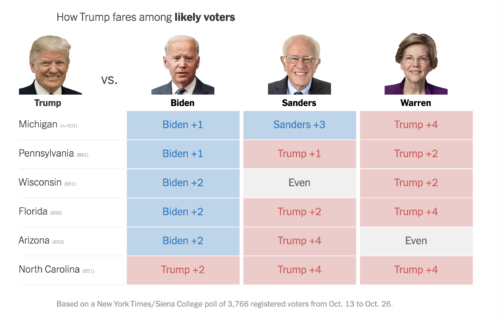 When it comes to our elections the Electoral College is the only thing that matters.

These six states went Republican in 2016:

Trump barely trails Biden in the six states among likely voters except for North Carolina. We have seen Biden losing ground across the board with Warren becoming the favorite.

The Democrats may have a problem with that since the survey shows Trump ahead of Warren among likely voters except for Arizona. As you can see Arizona only has 11 electoral votes.

If the numbers in the survey remain the same and Warren wins the nomination Trump would beat her by the same numbers as he did Hillary:

The results suggest that Ms. Warren, who has emerged as a front-runner for the Democratic nomination, might face a number of obstacles in her pursuit of the presidency. The poll supports concerns among some Democrats that her ideology and gender — including the fraught question of “likability” — could hobble her candidacy among a crucial sliver of the electorate. And not only does she underperform her rivals, but the poll also suggests that the race could be close enough for the difference to be decisive.

The New York Times admits that while this survey comes a full year before the election, but these “head-to-head polls a year ahead of the election have been as close to the final result as those taken the day before.” Trump’s consistent approval ratings are “a reason to think this pattern might hold again for a fourth cycle.”

Plus 90% of Trump supporters from 2016 still “approve of his performance.” His approval among the largest group of voters, the white, working-class voters, remains almost the same as from 2016:

The poll offers little evidence that any Democrat, including Mr. Biden, has made substantial progress toward winning back the white working-class voters who defected to the president in 2016, at least so far. All the leading Democratic candidates trail in the precincts or counties that voted for Barack Obama and then flipped to Mr. Trump.

As a result, Democrats appear to have made little progress in reclaiming their traditional advantage in the Northern battleground states, despite their sweep there in the 2018 midterms. Respondents in these states said they voted for Democratic congressional candidates by an average of six points, all but identical to their actual winning margins.

Nearly two-thirds of the Trump voters who said they voted for Democratic congressional candidates in 2018 say that they’ll back the president against all three named opponents.

I know the Democrats do not want another old white man because progressive or something, but Biden appears to be their one saving grace. Biden could swing the election to the Democrats.

An analysis of the 205 respondents from the six core battleground states who support Mr. Biden but not Ms. Warren suggests that she might struggle to win many of them over.

Over all, 26 percent of these voters say they have a favorable view of Ms. Warren, compared with 47 percent who have an unfavorable view.

Of voters who support Mr. Biden but not Ms. Warren, 52 percent agree with the statement that Ms. Warren is too far to the left for them to feel comfortable supporting her for president, while 26 percent disagree.

Dawn Marshall, an independent from Tampa, Fla., said that with the exception of Mr. Biden, the Democrats running for president are too left-leaning for her.

“They want to be socialists, and this is not a socialistic country,” she said. “This is a working country where people go out, do the best that they can do, find jobs. I am so sick and tired of having to support other folks. We can’t be equal.”

Also, 41% of the respondents who would choose Biden, but not Warren, find most of the women who have run for president are not likable.

While the Democrats may scream sexism, they cannot afford to scare off this group since it’s mostly males and working class. They also hold some conservative views.

But the group also includes women (emphasis mine):

Some women also fall into this group. Elysha Savarese, 26, works in victims advocacy in Florida. She voted for Mr. Trump and said she would not do so again.

But she wouldn’t vote for Ms. Warren, either.

“There’s just something about her that I just don’t like,” she said. “I just don’t feel like she’s a genuine candidate. I find her body language to be very off-putting. She’s very cold. She’s basically a Hillary Clinton clone.”

As for female presidential candidates in general, she said, “They’re super unlikable.”

Maybe, just maybe, the Democrats should not concentrate on skin color or sex.

I guess 2016 wasn’t enough to show these polls are pretty much garbage.

notamemberofanyorganizedpolicital in reply to thalesofmiletus. | November 5, 2019 at 10:05 am

Biden will be even further ahead when this is spread.

As a result of a FOIA lawsuit journalist John Solomon has received emails between the Burisma energy company and U.S. State Department; where Burisma seeking U.S. government assistance to get the Ukraine prosecutor to drop a corruption probe against the energy co., and leveraging Hunter Biden’s board membership toward their efforts.

This is the evidence the media said didn’t exist….”

Do anyone here think Presidential campaigns and Debates are useless and that the polls 1 year ahead show where this is realy at for Trump.

I can remember back in 1988 when Bush was like 30 points down in a poll versus Dukakis and I am sure you could find simliar for EVERY Republican incumbant and I remember even Obama polled badly in 2012 against a Republican opponent.

and then there was a direct campaign between candidates and boom! Incumbant wins by a landslide.

Trump is running against some pie-in-the-sky image of the Democrat candidate at this point so please don’t push this as “trouble” for Trump. It isn’t.

You have to look at the crosstabs to get any useful information out of it.

And would you look at that?

That’s just one that I looked at.

Independents are going hard for Trump in the important states right now.

Well, they polled, what, 0.003% of the electorate. Sure, that sounds like a perfectly adequate sample.

And, while admitting that a year out is a long time to be ante-guessing things, they get the same numbers when they compare them to another poll . . . also taken a year out. Well, that settles it. Besides, I read it on the Internet, so it must be true.

Yes, I’ve found a new respect for polls, after they so accurately predicted Hillary’s landslide win in 2016.

Unfortunately Biden’s falling apart. They videoed him facing the wrong ‘way around in Iowa, trying to give a speech with his back to the audience. Running this guy as a candidate should get someone charged for abusing a person over age 75.

Trump will outperform the polls by a large margin so I think he is safely ahead in all of those states.

Everyone understands the polls are just leftist battlefield prep to try to dishearten the enemy.

Ah, yes. The all important ‘likely voters.’ But I ain’t buying nuthing NYTimes is selling. Trump is killing it in fund raising, packing arenas with screaming fans, Democrats who side with Trump, MAGA train is humming.

Biden is bumping into walls, lost in America, drooling, and dried up for cash. Weekend at Bernie’s is a ticket splitter. I ain’t buying nuthing NYTimes is selling.

The only “poll” that counts is the one called an election. In that poll, Trump wins, bigly – bigger than last time.

All the other polls are just democrat vote distortion schemes.

Oh, plus the District of Columbia.

2 things I never trust one is a poll that never gives all the internals and the other is a NYT poll.