The police union took Trump’s side, claiming the mayor is trying to “bully” Trump and confirmed the government has “not charged nearly that much for other events.” 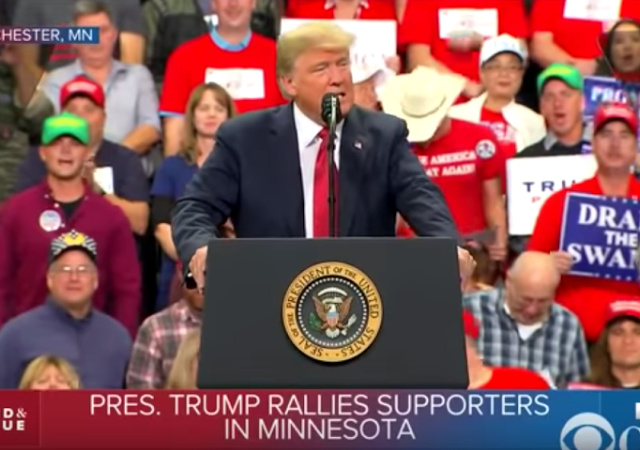 Frey voiced his opposition to Trump’s rally in September. He said he would normally welcome a sitting president, but Trump’s “rhetoric has made it clear that he does not value the perspectives or rights of Minneapolis’ diverse communities.”

Frey declared that the day of the rally the “entire city will not stand behind the President, but behind the communities and people who continue to make our city – and this country – great.”

The mayor promised to keep people safe at the rally while admitting it “will be a large scale and potentially hectic event.”

It looks like Frey has chosen another route to stop Trump’s rally. He provided the Target Center with a security bill for $530,000. Trump’s campaign said the total “is more than 26 times the estimated security costs for a 2009 Target Center health care rally held by President Barack Obama.”

Democrat Mayor Frey is using the bogus security charges to pressure the Target Center, site of the contracted October 10, 2019 rally, into preventing Minnesota residents from exercising their First Amendment rights in support of President Trump.

Frey’s city government preemptively informed the Target Center that it would be responsible for $530,000 in security and other costs related to the event. The Target Center attempted to pass the costs on to the Trump campaign under threat of withholding the use of the arena.

The Trump campaign informed the Target Center that the U.S. Secret Service is solely responsible for coordinating security and that withholding the use of the arena would be viewed as a breach of contract and result in court action. Additionally, the ridiculous sum of $530,000 is more than 26 times the estimated security costs for a 2009 Target Center health care rally held by President Barack Obama. Police officials estimated that the costs then were around $20,000. Again, the costs are a matter between the city and the Secret Service.

“We are well aware of Mayor Frey’s vocal partisan opposition to President Trump and calls to disrupt the rally,” read a letter from Trump law firm Jones Day to the Target Center’s management firm. “This last-minute squeeze seems to be nothing but a pretextual political effort with serious First Amendment ramifications.”

Campaign manager Brad Parscale slammed Frey for his “outrageous abuse of power” in an attempt “to deny the rights of his own city’s residents just because he hates the President.”

The radical Mayor of Minneapolis, @Jacob_Frey, is abusing his power in an attempt to block the President’s supporters from seeing him speak on Thursday.

We refuse to be bullied by a left-winger resister & won’t let him stifle the speech of @realDonaldTrump or his supporters! pic.twitter.com/ATnJNBRvFG

Of course, Trump spoke out against Frey on Twitter:

Someone please tell the Radical Left Mayor of Minneapolis that he can’t price out Free Speech. Probably illegal! I stand strongly & proudly with the great Police Officers and Law Enforcement of Minneapolis and the Great State of Minnesota! See you Thursday Night!

Yawn… Welcome to Minneapolis where we pay our bills, we govern with integrity, and we love all of our neighbors. https://t.co/v1cXvoD9uR

Frey and Police Chief Medaria Arradondo recently implemented “a new rule barring off-duty officers from appearing in uniform at political rallies or events.” Arradondo insisted it was not a political move because the rule “has been under consideration for a year after local constituents protest officers in uniform endorsing local and state politicians.”

The police union immediately fired back.

Police Officers Federation of Minneapolis President Lieutenant Bob Kroll told Fox News that Frey is trying to “bully” Trump from coming to the state. He also confirmed the government has “not charged nearly that much for other events.”

In fact, the police union is selling “Cops for Trump” t-shirts for $20:

“In compliance with policy, we don’t want any issue,” Kroll noted. “So, we just thought you know what we’ll turn the place into a sea of red with the shirts we designed. And, they’re available and we can’t keep them on the shelves. They’ve been selling out as fast as they come in!”

Kroll pointed out that, under previous administrations, officers in Minneapolis were ordered to stand behind presidents, calling out local politicians as “very left.”

Trump thanked Kroll and the union for their support:

Thank you to Lt. Bob Kroll of the great Minneapolis Police Department for your kind words on @foxandfriends. The Police are fighting the Radical Left Mayor, and his ridiculous Uniform Ban. Actually, I LOVE the Cops for Trump shirts. Want to bring some home. I am with you 100%!!!!

Get your great T-Shirts, “Cops for Trump,” at https://t.co/pmhDDXsIlx REALLY NICE! Thank you to Minneapolis Police Officers & Union! @foxandfriends

In other news today, it’s on.

Democrat radicals are really into abuse of power, these days.

I wonder if they co-ordinate on this.

Yes, they most certainly do. And you bet this is a co-ordinated attack to help Frey buy votes too.

Which means he funded a credit union solely based on their color. And since Credit Unions are owned by the members, he used $500,000 to buy black votes.

Yup, this is more than just blackmail. It is black male voter fraud.

So what’s Frey going to do if Trump just refuses to pay those outrageous security fees?

I did a little bit of math on the claimed expenses of $530,000. If you took *every* police officer in the entire City of Minneapolis and paid them each $100 to do security for the 2 hours or so of the rally, you would still only spend $80,000.

Perhaps Frey would be better suited as a Mayor of a city in Stalinist Russia. He knows nothing of freedom or liberty. Fortunately, Frey is but a gnat buzzing around greatness.

No protest is too petty. No act of “resistance” too irrational. No excuse too outrageous.

There will be much more of this over the coming year.

So a basically irrelevant Mayor is looking to bolster his Marxist credentials and could end up costing the City larger dollars defending his “wokeness”. I hope the Trump campaign does sue, like is alleged, let this twerp have to answer to his plantation slaves why their taxes had to go up to pay for his petty move. I’m sure that will play well.

The left is desperately trying to get this cold civil war to go hot. I doubt they are truly ready for the consequences of this goal.

I am NOT advocating for a hot civil war. I don’t fantasize about one, I hope we never have to go through a civil war II. But if it does happen, guys like this mayor are in for a rude, rude awakening, Probably the rudest awakening imaginable.

Is this the true face of Minnesota Nice? :-

Governing with integrity, loving neighbors? Can this guy be any more inauthentic? Then again, progressives like him really believe they are better human beings.

Welcome to Minneapolis where we pay our bills, we govern with integrity, and we love all of our neighbors.

Uh-huh. Next he’ll be bragging about his imaginary Cherokee ancestry.

“…we govern with integrity…”

I live in Minnesotastan. Frey is a tool.

Can the United States bring extortion, racketeering and corrupt practices charges against Frey — just as they have done countless times to Republicans. At the least he is guilty civilly of torious interference in a contract.

Minneapolis is the district that elected Ilhan Omar.

I’m going to have to support the ban on policemen in uniform at campaign rallies, though (other than actually do policing). The same rule the military has had for decades, in order to prevent crossing the line from endorsement-by-individual to endorsement-by-teh-gov’t. I’ve never thought it was a good look.

Whether it’s the Minneapolis mayor, Facebook, Twitter, or whomever, we are increasingly seeing certain people/organizations claiming that they are not going to allow conservatives to be present, post campaign advertisements, etc., because they are dishonest according to their own definitions. Accordingly, these organizations and individuals feel it is necessary to protect the public from this misinformation.
>
What is so wrong with allowing these events to proceed, the advertisements to run, people to express themselves, etc., and allow the public to decide for themselves who is being honest of dishonest?
>
No matter how you view the demands from the Left, they are disingenuous and insulting. If you view it from the conservative side then you are watching censorship. If you view it from the Left/Democrat side then they are telling you that you are too stupid and impressionable to bear the message so they must protect you. To my way of thinking, this is even more insulting.
>
To claim the Republican’s messaging is to dangerous to be heard only serves to weaken the Left/Democratic party’s position. Who wants to be treated like an infant by big government? Perhaps this ios one of the reasons why polls show support for all the Democratic Party candidates is plummeting while Trump’s is soaring.