Because people of the internet were mean to him, Frey suggested it gave him a “small glimpse” into what he assumed “it must be like for… any woman on the Internet.” 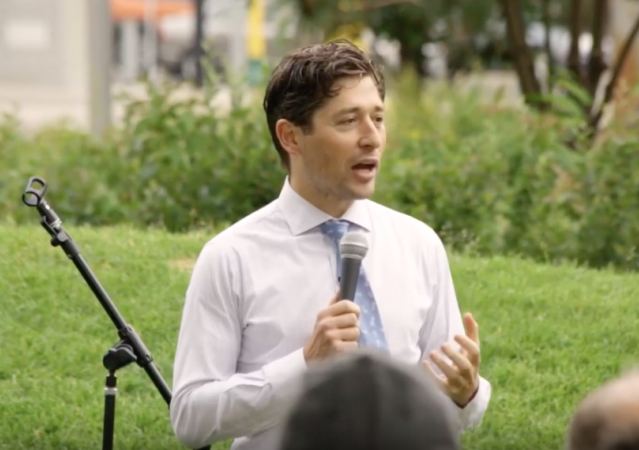 Minneapolis’ Democrat Mayor Jacob Frey has had a rough time after publicly maligning President Trump and attempting to keep the president out of the city.

Because people of the internet were mean to him, Frey suggested it gave him a “small glimpse” into what he assumed “it must be like for… any woman on the Internet.”

Weird week. My DMs are trash, which gave me a small glimpse into what I assume it must be like for…any woman on the Internet?https://t.co/Ie1mWroBvr

And I guess if people of the internet are mean to you on the regular, then you’re a woman? Or you can identify as a woman on the internet? I don’t even know how these things work anymore.

Trump and Frey got into a public spat when Frey attempted to block a Trump rally from taking place in Minneapolis:

“The Deplorables criticized me before I decided to identify as a woman, so obviously the Deplorables used a time machine to see into the future and decided to attack me for being a woman. Or something like that. Whatever. #Resist”.

notamemberofanyorganizedpolicital in reply to Recovering Lutheran. | October 16, 2019 at 9:38 pm

So the DEM mayor is coming out as a…
SHE-MALE?

And Mayor Frey liked it! Here is the new Frey campaign song: https://www.youtube.com/watch?v=dEWuAcMWDLY

I’m a woman. People aren’t mean to me on the internet. But then, I can handle a discussion or even an argument, and, if insulted, I’m perfectly capable of defending myself. I think what the Mayor of Minneapolis wanted to say is that he felt weak and diminished. Guess he’s not very good at defending himself. Poor thing.

I would like to know this mental midget’s background. Whatever his education, it was clearly subpar. Did his parents decide he shouldn’t get an education?

These anti-American twits need to go.

Ship him to Venezuela and let him learn in the real world. He could use the education.

He started out as a girly man to begin with, well before Trump showed up on the political scene.

Internet people were even meaner to Mayor Frey than they have been to you Kemberlee! Finally, women have found their champion! Apparently the mayor feels left out of the “Unbelievably Lame and Stupid Things Politicians Say” contest. Talk about being a wuss.

Someone’s T-levels are way too low.

Such a dear young sissy. Time for him to boy-up as manhood passed him by.

At least this explains why he was wearing hose, heels, and a bra. Of course that’s also a badge of honor in dem circles these days.

And they thought that they were electing a lumberjack.

Well there you are, we’re helping you be less patriarchal, what’s wrong with that? What a silly little man.

Makes sense. He never showed he had balls.

Frey thinks he is a woman and Minneapolis is his vagina. All he did was try to stop Trump from raping him by coming in.

Rachel Dolezal and Fauxcahontas stand by their sister.

Appropriation screams will be deafeningly silent.

When I was a kid, I was advised that the way to deal with bullies was to stand up to them.

Advised, by my mom. And she was right. Apparently she was more of a man than the mayor of Minneapolis.

“Frey calls me a meanie because of the fact
That his press releases I make him retract.
He’s usually as sexless as liberals can be.
But when he’s on the internet he’s always a woman to me.”

Frey suggested it gave him a “small glimpse” into what he assumed “it must be like for… any woman on the Internet.”

Well, any woman who tried to keep the President out of Minneapolis, anyway. And she’d damn well deserve whatever she got.

One piece jammies and hot chocolate are nice.

Oh, oh, oh, go totally crazy, forget I’m a lady
Men’s shirts, short skirts
Oh, oh, oh, really go wild-yeah, doin’ it in style
Oh, oh, oh, get in the action, feel the attraction
Color my hair, do what I dare
Oh, oh, oh, I want to be free yeah, to feel the way I feel
Man! I feel like a woman!

FFS. How exactly am I supposed to feel, being a woman on the internet? Is it supposed to turn me into a victim? I can say… it’s not working.

I don’t know if those mean things said to him on the Internet “made him feel like a woman”.

But I’d bet that a little twerk like this was regularly beat up, and had his lunch money stolen in 5th grade. Savage little boys like to prey on wussies like Frey.

What a frigging sissy. That’s what the democratic party is full of. Butt buddies for their moooslem buddies

Sounds like this sissy boy needs to grow a pair.

Wow! A perfect example of a person insulting another set of people because of his own weaknesses! What does being a woman have to do with your personality disorders? Shame on you and I pray you meet the kind of women that I have in my life. They will kick your punny ass!

I have to ask, why is this a bad thing?

Someone send this baby a LeBron jersey and a ticket to Hong Kong.

Thanks, I needed a good laugh.

Why is he hiding behind skirts? Is this another War on Women theme from the dems?
He should get castrated so he can honestly say he’s not a man instead of hiding behind a fake theme.

This woman on the internet says he should put on his big girl panties and deal with it.

It’s pretty obvious what he means. He’s referring back to Gamergate. If you remember the leftist narrative on that, it was that all women are routinely harassed on the internet, because it’s a cesspool of Toxic Masculinity™ or something like that.

To this day people like this mayor will tell you with a straight face that Gamergate was about horrible males being mean to women out of pure misogyny, because they are honestly convinced that that is what happened. They have no clue. Just as they are still convinced that Trump asked Putin to crack Tony Podesta’s email account, and that the Swift Boat Veterans for Truth were smear artists making up stories about a brave war hero, and so many other leftist myths.

So the mayor is now saying that he’s recently been treated on the internet the way women are all the time, so now he has some inkling of what it must be like for women. Given the myths he takes for granted as truth, what he said makes sense.

I don’t dislike you but sometimes you just aren’t that good at having fun with obvious gaffes.

Can you blame him? I mean, whoever heard of a politician being criticized? (please don’t tell me I need a sarc tag)

You know what would really make Mayor Onesie feel like a woman?

If we dressed in all black, complete with face masks, and sucker punched hi… err, her.

While his PD stands around and does nothing about it.

Such is the life of a limp wristed metrosexual. People of courage are big enough to overcome a few criticisms, but in an age where everyone is looking to be a victim, whining about a few insults would appear par for the course for some progressive mayor. What was that they said about dishing it out but not being able to take it???

Mayor Frey is confused. Instead of feeling like a woman, he meant that he felt like a … ‘feline.”

As my grandmother used to say, “Well bless his heart.”

He acted like a TW?T so why not TREAT IT as one?

Sure, I bet lots of things make him, ‘feel like a woman.’

Well that, and all the sand in his …

A inept Leftard perhaps but a woman,paaleezze.

Back off the soy, you will feel better.

Hello? What? You’re kidding me! What a complete wuss! Soy Boy on parade. I mean, really, his widdle feelin’s were hurt by the nasty comments on social media? He was a “tough guy” condemning the President, yet some anonymous comments send him running for his teddy bear in a safe space? What a complete fool.

Witness the pathological and infantile narcissism of the Dhimmi-crats’ posture of contrived victimhood — their most valuable currency.

Claimed victimhood is a source of power used to control other people.

Also, he is stating what he really thinks of women. Omar (elected by the same group of voters in Minneapolis) could kick his ass right off the planet. Yet, she claims to be a “victim” too. It is a power play.

Someone should tell him that being a pussy and being a woman are two different things.

Awww, just put on your Daisy Dukes on, throw on some rouge and your good to go.

Bonus: He could then also do transvestite story time at the library!

But I’m pretty sure the woman he felt like wasn’t Maxine Waters, who told her Democrat thug followers, “”If you see anybody from [Trump’s] Cabinet in a restaurant, in a department store, at a gasoline station, you get out and you create a crowd and you push back on them, and you tell them they’re not welcome anymore, anywhere.” Talk about mean… I bet that would have made Frey go positively “13 Reasons Why.”

If Frey doesn’t want to feel like a woman, then he shouldn’t act like he’s an emasculated male.