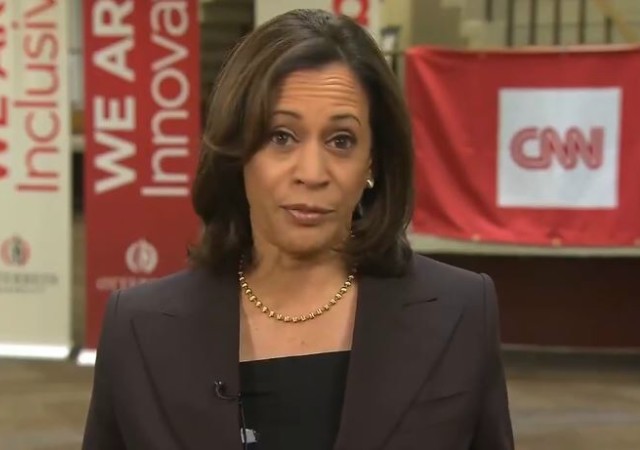 Sen. Kamala Harris (D-CA) apparently thought she would make a great campaign move in refusing to join a criminal justice forum because of an award they bestowed upon President Trump.

She initially, and quite bizarrely given her own record on this matter, said she was boycotting the event.

I won't be complicit in papering over Trump's record. pic.twitter.com/eF27XpaRZy

NEWS: Kamala Harris will now SKIP tomorrow's Second Step Presidential Justice Forum at Benedict College, where she was a scheduled speaker. Harris is protesting that President Trump was given an award today for his criminal justice efforts.

President Trump landed some truth bombs that seem to have prompted Harris to rethink her ridiculous campaign stunt.

Suddenly, Harris has changed her tune.

In a bizarre back-and-forth on her attendance, Kamala Harris said Saturday she would, in fact, go to a criminal justice forum in South Carolina, despite very publicly announcing she would boycott the event due to a sponsoring group’s decision to give an award to President Trump.

The 2020 presidential hopeful on Friday announced that she would skip the 2019 Second Step Presidential Justice Forum at Benedict College in Columbia, South Carolina, after the 20/20 Bipartisan Justice Center awarded the president for his efforts to pass sweeping criminal justice reform legislation.

Harris’ partisan hackery didn’t pan out she had hoped even among the “woke” left.  Maybe because her record on criminal “justice” for black people is far out-stripped by Trump’s?

Anyway, she tried to save face.

2020 candidate Sen. Kamala Harris had refused to attend a criminal justice forum in protest of an award it was giving to Pres. Trump for criminal justice reform. But she spoke there today and explained what changed her mind. https://t.co/EeeDLzQ1JP

But by midday, Harris had come around, with a campaign announcement that she would, in fact, be attending the forum, with her campaign claiming that she successfully pressured the group that awarded the president to be dropped as a sponsor.

“After Senator Kamala Harris stood up and objected to their group awarding Trump and excluding HBCU students from participating, the 20/20 Bipartisan Justice Center was removed as a sponsor for the criminal justice forum at Benedict College,” the Harris campaign said in a statement Saturday. “After their removal, Harris announced she will join students, Mayor Steve Benjamin and the broader Columbia community on campus at Benedict to discuss critical issues for the country’s justice system.”

Harris, at the event, explained her flip-flop in attendance to reporters.

“Let me just be clear so you can hear it from me,” she said. “I refused to come because frankly Benedict College students were excluded and also I said I wouldn’t come because I couldn’t believe that Donald Trump would be given an award as it relates to criminal justice reform.”

Call me cynical, but what changed her mind was the simple fact the she looked pathetic and desperate in her attempt to boost her doomed 2020 presidential campaign with ridiculous virtue-signalling that fell flat even on the Trump-deranged radical left.

Kamala is just jealous because no one wants to give her an award. Maybe she should have worked to let low level criminals out of prison instead of doing everything she could to keep them behind bars.

That is tough to swallow….

She has zero hope of increasing her polling numbers to a level where she has a shot of being picked for the lowest level appointed position should the National Socialist party win the presidency.
She and Booker should join forces with Beto and drop out quietly, retaining the little respect they have from the leftist kooks who are supporters of theirs.

She’s a sickening piece of trash – all politics aside.

Kamala gives us some real insight into what kind of a person she is down inside. She is unable to accept that people in the other party can actually do things that are good. She is wed to an ideology. She holds a position that is supposed to represent the people of her state, but cannot accept that someone else is capable of helping them. Where was she when that crime reform bill was working its way through the Congress. Did she support it? She should have. And if DJT had vetoed it she would have been at the head (no pun intended) of the line to condemn him.

She is a small person and a hypocrite.

She is simply a boor.
I saw a video of the event where Trump was involved. It was incredibly moving, with the ex-prisoners extolling his compassion and concern.

When you’ve stepped into it with one foot, what to do? Why, step in with the other foot, too.

Boycotting the forum was a tactical blunder. Doing a 180 didn’t make that better. A stupid blunder followed by a spineless flip-flop is an unimpressive performance even by California standards.

Does anyone have any idea what she’s talking about?

Don’t ask. Or, as Harris herself might have said using the immortal words of Ring Lardner, “‘Shut up,’ she explained.”

Right after “”Hello” she lied”.

https://en.wikipedia.org/wiki/Central_Park_jogger_case
Trump said New York should bring back the death penalty when this happened. I think that’s probably what she’s talking about.

For some reason democrats love settling law suits when the money isn’t coming from them. All these scum bags were convicted for participating in a gang rape.

Thanks, that makes sense. They may or may not have committed the rape. They were definitely not innocent.

OTOH, they need nothing of substance to preach their lies. They make up shit all the time.

Does SHE have any idea what she’s talking about!

No, she doesn’t even know what she’s talking about. If it puts money in her pocket, she likes it. If not, meh.

Stupid fool didn’t know that DJT is a supporter of black families of very long standing and very good effectiveness. Somebody must have clued her in.

She wasn’t “clued in” as that is impossible for the rabid jailer of black people. However, she probably was clubbed over the head about the bad optics

In response she said I’m a good liberal so I can be for or against something before I’m against or for something.
Liberal Playbook: Liberals never see what way the winds blowing their minds they evolve.