Health Officials Warn That 44,000 Disneyland Visitors May Have Been Exposed to Measles

Health Officials Warn That 44,000 Disneyland Visitors May Have Been Exposed to Measles 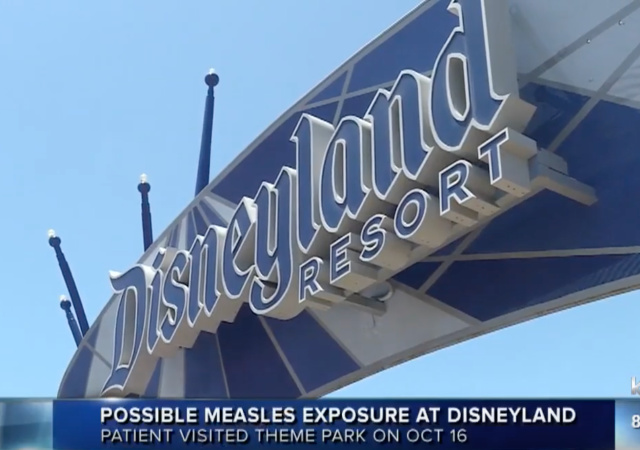 It was only three weeks ago that the US was declared measles-free.

Now, Los Angeles health officials are warning that a person diagnosed with measles visited Disneyland followed by a stop to a popular Starbucks location, exposing thousands to the illness.

The theme park draws an average of 44,000 people every day from all over the country and the world – and any of the visitors that day could have come into contact with the infected Los Angeles resident.

Officials warn visitors to both location to watch for symptoms such as cough, fever, sore throat and eventually the tell-tale rash, which will likely appear within 21 days of exposure.

Measles cases have surged to over 1,200 in the US in 2019, threatening the nation’s measles elimination status and far outpacing a 2014 outbreak among 288 people that had Disneyland at its epicenter.

Legal Insurrection readers may recall we covered the 2014 Disneyland-centered outbreak. Officials traced the infectious park visitor to 147 measles cases and the impetus behind major legislative change in the state regarding vaccinations.

Health officials noted that the current case-load is centered on unvaccinated individuals.

The majority of cases to date were unvaccinated or did not know whether they had ever been vaccinated.

“For those who are not protected, measles is a highly contagious and potentially severe disease that initially causes fever, cough, red, watery eyes, and, finally, a rash,” said Dr. Muntu Davis, Los Angeles County health officer. “Measles is spread by air and by direct contact even before you know have it. The MMR immunization is a very effective measure to protect yourself and to prevent the unintentional spread of this potentially serious infection to others.”

We also followed the Portland-area outbreak this year that led to the declaration of a public health emergency. Now area officials are issuing a warning that someone diagnosed with measles went through the Portland International Airport on Saturday (Oct. 12).

According to officials, the person was not immune and visited countries where measles is common.

Measles is highly contagious and can be spread when an infected person coughs or sneezes. The virus can remain in the air for up to two hours.

“Anyone exposed and not immune can get just-in-time medicine; [the] window closes tomorrow,” a spokesperson from Multnomah County Health said.

Who is this mystery person? What is their immigration status? Have they been vaccinated? These are relevant questions that pertain to public health, and the media fails to do their jobs when they fail to ask (and answer) these basic questions.

Can’t ask legal status, that would be racist my man.I love how they say “unvaccinated person”, as if they are an American who chose not to vaccinate. There are not enough Americans who make that decision, we have a “herd” vaccination quota that is met every year. Believe me, if we had not met the herd percentage, the jails would be full of them. Your liberty is tolerated only to a degree , if your a citizen. Illegal? No problem, drink, drive drunk, kill our loved ones, murder, rape, not a problem… just ask Kate Steinle‘a family…
It’s the illegals, who not only brought measles with them, but every God awful disease you can think, of including the flaccid polio like virus
Illegals and the homeless, what a wonderful cauldron we have got here.

The “anti vax” movement is a very localized phenomenon, and there are areas in the country that are falling below the “herd immunity” threshold. Letting a bunch of people with unknown medical histories flood the country certainly doesn’t help matters.

Can’t ask legal status, that would be racist my man.I love how they say “unvaccinated person”, as if they are an American who chose not to vaccinate. There are not enough Americans who make that decision, we have a “herd” vaccination quota that is met every year. Believe me, if we had not met the herd percentage, the jails would be full of them.

WTH are you talking about? It is not illegal not to be vaccinated. There are far too many American parents (not immigrants) who are gullible enough to believe that vaccinations are bad for their children and leave them vulnerable to be infected and to infect others, and there is no law that could put them in jail for that. When their kids reach school age they can either get an exemption, or find a private school that doesn’t require immunization, or home school.

Further, you don’t seem to understand how herd immunity works. Even with herd immunity an unvaccinated person is vulnerable, and will be infected if they encounter an infectious person. The point of herd immunity is that if 95% of the population is vaccinated then the 5% who are not are unlikely ever to run into someone infectious. Not guaranteed not to, just unlikely. If they go to places popular with tourists, such as Disneyland, this likelihood increases.

Third, there is no evidence at all that illegal immigration is contributing in any way to our measles problems. Every known outbreak has been traced either to legal tourists, or to Americans returning from abroad. That is how it spreads.

“According to officials, the person was not immune and visited countries where measles is common.”

Why not name those countries? WHERE ARE THOSE COUNTRIES? Are we supposed to guess? [I have plenty of educated guesses, however ….].

The Ukraine. And secondarily, Israel (which gets it from the Ukraine; at least 100,000 Israelis a year visit the Ukraine, and once in a while someone catches measles there and brings it back.)

No offense, it’s not immigrants legal or otherwise spreading measles: it’s rich white liberals. The unvaccinated parts of LA are the richest and whitest parts. Huntington Beach has a lower vaccination rate than El Salvador.

Maybe it is, maybe it isn’t. You don’t know. The odds are on it being an illegal. There’s a lot more of them than there are ditzy white liberals who are afraid of vaccines.

No known outbreak has been traced to illegal immigrants. It’s always either an American who went somewhere and brought back a souvenir, or a foreigner here legally on a tourist visa.

Ahhh, no, not enough, look up herding theory

The irony is about every American born over the age of 40 is immune, but many of our children are not because of the antivaxxers and the publicity given to a fallacious autism study . I am glad I come from a state where vaccination is mandatory if you intend to go to ANY school, public or private.

It is a false statement that everyone over 40 is immune. Neither my husband or myself have had the measles. Our medical insurance covered the shots we received this spring.

notamemberofanyorganizedpolicital in reply to danvillemom. | October 25, 2019 at 4:55 pm

Plus Danvillemom, I think the effectiveness of those vaccines wear out…… like tetanus shots need to re-done a few times in one’s life….. Not sure about that on the measles, but…..

Milhouse in reply to notamemberofanyorganizedpolicital. | October 26, 2019 at 8:19 pm

No, the measles shot doesn’t wear out.

Far more people die from the flu. I demand that you be required to get every flu shot -every season. For The Children.

Actually people between about 45 and 65 are less immune, because back when they were children they were only given one shot, and it’s now believed that you need two. They only started giving the second shot in the ’80s.

The effort to turn California into a third world dystopia continues.

This makes me so angry. People actually think measles is a mild disease when in truth, it is a devastating disease.

I lost my hearing to measles at the age of two and now currently battling stage 4 breast cancer that may be connected to measles because there is no history of breast cancer in my family and when I asked my oncologist if there is a possible link between measles and breast cancer, he said it is very likely and research has shown that there is active measles virus embedded in breast cancer.

Makes me so mad when I hear about ANOTHER measles outbreak and my heart breaks for those poor kids who aren’t vaccinated.

Long time lurker but had to say something about measles. Back to lurking.

You forgot your snark tag! LOL

I think all regular readers would not need the tag to understand however……..

Haha. So true. It is amazing to me that they can whip up such hysteria over one person with the measles in a Starbucks and at the same time get those same people to defend open borders. It boggles the sane mind

It’s all about the Benjamins. Lots of money in selling vaccines and even more in human trafficking.