Free Market Justice: The rebooted series is being cancelled 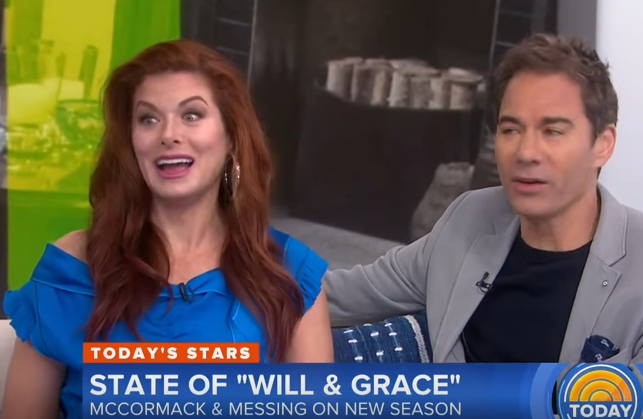 I assert that Trump Derangement Syndrome is like syphilis, inasmuch as the longer someone is infected, the more likely the mind will be affected. Today’s case study features two B-list celebrities.

“Will & Grace” stars Eric McCormack and Debra Messing have been slammed by President Donald Trump after they essentially called for the blacklisting of anyone in Hollywood who attends his upcoming California fundraiser. 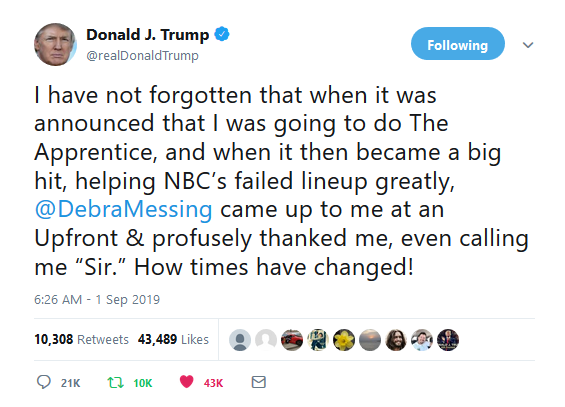 “I have not forgotten that when it was announced that I was going to do The Apprentice, and when it then became a big hit, helping NBC’s failed lineup greatly,​ ​@DebraMessing came up to me at an Upfront & profusely thanked me, even calling me ​’​Sir.​’​ How times have changed!​,” the president posted on his Twitter account.

​Messing and her NBC co-star Eric McCormack ​said they would shame the Trump supporters in Hollywood who attend the fundraiser, where tickets could go for as much as $100,000 a couple.

It all began when McCormack, the “Will” actor in the supposed NBC comedy, initiated the latest round of anti-Trump hysteria with the following tweet, which focused on the event.

Canadian-born McCormack, 56, said he wants the Trump donors’ names revealed so “the rest of us can be clear about who we don’t wanna work with.”

Trump plans to attend the Sept. 17 fundraiser in Beverly Hills during a trip to California that will also include visits to the San Francisco Bay Area and San Diego, The Hollywood Reporter wrote Thursday.

Tickets for the Beverly Hills event, scheduled during the week of the Emmy Awards, will reportedly start at $1,000, with packages for couples costing as much as $100,000.

His co-star, Debra Messing who plays “Grace,” jumped right in with both feet in support of that idea. 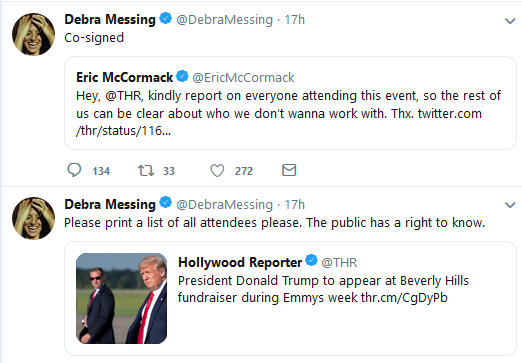 Hey @jack is this tweet openly threatening to “blacklist” American Citizens in Hollywood okay for the good of society? Just asking for a friend. ? https://t.co/nsy3OhQljP

How wonderfully fascist of you @EricMcCormack ! Yes, how dare anyone in a FREE COUNTRY actually be FREE to support someone that you don’t or have an opinion that differs from yours. Anyone that doesn’t get in line with your opinion should absolutely be blacklisted from work. ?‍♀️

I personally have never ever NOT worked with someone just because I had a difference with them politically.

It’s absolutely heartbreaking that you would say something like this & then ask The Hollywood Reporter to get on board with you ??‍♀️ (so sad) https://t.co/wG9SsYpXlv

The comparisons to the anti-Communist Senator’s Hollywood blacklisting campaign were quite numerous.

Change your last name to McCarthy and save us some time.

At the top of the list will be Eric “Honest, I didn’t play Joe McCarthy, but I did stay at a Holiday Inn Express” McCormack. #TheTolerantLeft

Dude, you’re the 21st century version of Joe McCarthy. Hollywood needs another purge but this time it’s the socialists going of the deep end

Trump and his supporters have been a target of this questionable comedy reboot.

Since “Will & Grace” rebooted in 2018, the show has made a mockery of Trump supporters in the most unsubtle way possible, with one episode referring to them as “terrible people with horrible beliefs.”

The episode revolves around the character Karen Walker (Megan Mullally), a caricature of a rich conservative, looking to get a MAGA cake baked for President Trump’s birthday. When she goes to a local bakery, the baker (Vanessa Bayer) refuses to bake the cake.

“Let me get this straight, Smiley Cyrus. You’re refusing to make a cake because you don’t like what it says?” asks Karen Walker in an obvious reference to Masterpiece Cake Shop v. Colorado Civil Rights Commission.

In perhaps one of the greatest examples of what I like to call “Free Market Justice,” the rebooted series is being cancelled after its third season is over.

…[R]atings declined precipitously over the first season, which was an unrelenting collection of anti-Trump jokes.

Numbers did not improve from there, but the Emmy-winning show — which originally aired on NBC from 1998 to 2006 — had already been renewed for a third season.

“It will be topical, but not really, as far as Trump stuff.

I hope that McCormack and Messing have fun joining Kathy Griffin in celebrity FUNemployment.

Debra Messing – not even a has-been.

To qualify as a has-been you had to have been a once-were.

In short, a never-was.

Meh. I quit paying any attention to Hollywood over twenty years ago. Haven’t missed it a bit.

These two are quintessential narcissistic morons: not a clue about what happens outside of their dressing rooms or their mansions or their cocktail parties.

Can you imagine being married to one of these a-holes?

“But it’s different when we blacklist people because ORANGEMANBAD!!!”

How many people watch the rebooted W&G show? And how many of those people follow their twitter accounts? Okay, checked the male and he’s got 240kish followers.

Watch? Hell, I never heard of them.

People in show business are paid to speak lines. Further, they are all on social media, with audiences and agents in place. So, if somebody has a message, they call an actor. That’s all this is.

I am disappointed with Debra Messing, but only because I thought she was smarter than this.

It’s sort of basic high school history to be able to recognize McCarthyism, especially for show people. What a dunce.

As for the other character, I have no idea who he is.

“I thought she was smarter than this.”

Years ago I saw a very funny interview of Truman Capote on a talk show, I think Dick Cavett, where he was ranting about how stupid actors are. “You can’t be intelligent and be a good actor” etc.

Host: “What about Laurence Olivier?”

Capote: “I don’t think he could find his way around a racetrack.”

I still am amazed that so many listen to and are influenced by a couple of “actors” statements. If they are good at their craft, they pretend to be something that they’re not. Toddlers do this all the time, with, at times, a load in their pants. Next stop; B actors hall of indifference, elected on the final ballot.

This is no different from attempts to boot Chick-Fil-A from campus, or demanding people be fired because 10 years ago they tweeted something allegedly insensitive to homosexuals.

The left only knows how to attack and destroy and its members love that about it. Trump and those who voted for him are favored targets but it’s the targeting they really care about.

That doesn’t mean much. Three seasons is merely what you need to get into syndication.

You know, when you’re stopped at a red light, with a garbage truck in front of you?
It pulls away and that pool of smelly liquid it leaves on the pavement.
That’s what is known as, Debra Messing.

LOL, Trump had that loony Debra for lunch.