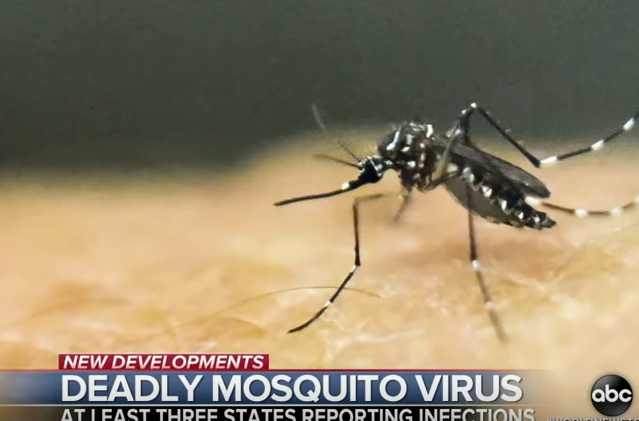 Health authorities are warning residents in six states so far about Eastern equine encephalitis, a virus transmitted through a mosquito bite that has left seven people dead this year.

At least 27 people have been infected in six states.

This latest reported deaths were in Connecticut and Massachusetts. The state health department in Massachusetts said there are now 75 communities at critical or high risk for the rare, but deadly disease, known as EEE.

The mosquito-borne virus causes severe brain inflammation in about 2% of infected adults and 6% of infected children. EEE is rare, occurring in about five to 10 people a year, according to the Centers for Disease Control and Prevention. But this year, Massachusetts alone has reported 10 cases, and Michigan eight. One of them is Ronna Bagent’s father, Stan Zalner.

“No one really knew what was wrong with him,” Bagent said.

Zalner was hospitalized three weeks ago, just before his 79th birthday. Tests this week confirmed he had the virus and he remains in a coma.

“It’s just one little tiny mosquito and it can cause horrible neurological effects,” Bagent said.

Residents of these states are urged to follow health precautions similar to those for protecting against Zika, another mosquito-borne pathogen: Use repellent, remove standing water, avoid outdoor activity in the morning and evening when the insects are active.

…The disease is one of the most dangerous mosquito-borne diseases in the United States, with a fatality rate of 33 percent in humans, according to the Centers for Disease Control and Prevention. About 90 percent of the horses that are stricken with the disease die, it said.

Mark Fischer, an epidemiologist in the C.D.C.’s Arboviral Diseases Branch, said this year’s increase in cases had not set off any alarms. “It’s normal to see spikes from year to year,” he said. “However, we are seeing a higher level of activity than in recent years.”

Of course, climate change is to blame.  Or likely not.

Climate change plus human travel and migration may also play a role in mosquito-borne diseases, potentially exposing half of world’s population to disease-spreading mosquitoes by 2050, an analysis published in Nature Microbiology in March found.

But other studies have found the ban on the insecticide DDT, rather than a warming climate, may be responsible for mosquitoes thriving in the U.S. It appears many factors are at play.

We can start using DDT again… when?

Are you crazy? We don’t need anymore of that crazy sexist talk. I guess if male mosquitoes were the one sucking blood and carrying diseases you would be just fine with that. Besides that malaria is a great way to lose weight and how are you going to get it without mosquitoes? 🙂

Where is the mighty Center for Disease Control? Why are they not doing something really productive – LIKE ELIMINATE MOSQUITOS? Naugh! They gots to do something really important for their Demoncrat massers. Like another worthless gun control study.

I believe DDT is being used in areas with malaria. As for the CDC – yeah, what are they up to? Why aren’t they investigating the LA homeless for diseases? Some people say LA is on the verge of a plague … as if having so many show business wannabees isn’t plague enough for one one city!