“I’m fighting against a person with unlimited resources, and repeatedly the judicial system has failed to find fault in his behavior.” 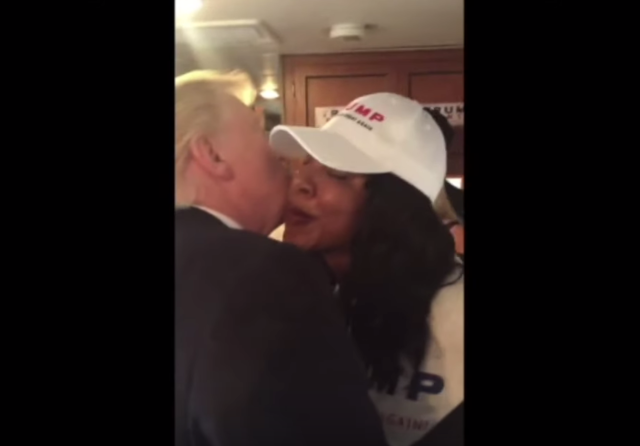 At the time, eye-witnesses denied the veracity of Johnson’s claim. And then video of the alleged incident surfaced.

According to The Daily Beast, Johnson dropped her suit, complaining she was “fighting against a person with unlimited resources, and repeatedly the judicial system has failed to find fault in his behavior.”

The former Trump campaign staffer who accused the president of forcibly kissing her during an August 2016 rally has decided to drop her lawsuit.

“I’m fighting against a person with unlimited resources, and repeatedly the judicial system has failed to find fault in his behavior,” Alva Johnson, 44, told The Daily Beast on Wednesday. “That’s a huge mountain to climb.”

Johnson initially filed her lawsuit in February, claiming that Trump grabbed her and leaned in to kiss her on the lips in an RV during the Tampa event, and that she turned her head at the last minute to avoid the “super-creepy and inappropriate” encounter, causing him to plant the kiss on her cheek instead.

She also accused Trump of gender and race pay discrimination.

When video evidence of the encounter was reported by Politico in July, lawyers for Trump and Johnson both claimed the footage vindicated their clients. President Trump’s lawyer, Charles Harder, posted the 15-second clip online and submitted it in court documents as part of discovery in the case. Harder said in those documents that the recording proved Johnson’s suit was “unmeritorious and frivolous,” calling the exchange “an innocent moment between a dedicated campaign staffer and the candidate for whom she was working.”

Johnson, who has said she previously met Trump twice before, can be heard saying in the video: “We’re going to get you in the White House; I’ll see you in February.”

In the same court filings, Trump’s attorneys also included a brief, personal declaration from the president saying he did not remember ever meeting Johnson. “I do not know plaintiff Alva Johnson or recall having any interactions with her,” he said.

But Johnson’s lawyer, Hassan Zavareei, said on Wednesday in a statement to The Daily Beast that the video “shows Trump grabbing Alva by the shoulders, pulling her into him, and kissing her in front of numerous co-workers and others” and that it proved Johnson was “telling the truth about what her employer did to her.”

Zavareei called Trump “the most powerful sexual predator on the face of the Earth,” in light of the more than a dozen other women who have come forward with allegations of misconduct against Trump, including attempted rape, groping, and forcible kisses.

Though Johnson doesn’t appear shaken in the video, she has repeatedly said that she did not fully appreciate the interaction until she heard the now-infamous audio recording from the Access Hollywood tape in October 2016, when Trump bragged that he used his fame to forcibly kiss and grab women “by the pussy.”

Gee, what a surprise.

If providing evidence beyond your assertions is “a huge mountain to climb” then perhaps you have nothing to litigate?

And, yes, the president has plenty of resources. But so do his detractors. And, therefore, if you had a case you’d find you also had access to plenty of legal resources.

Has the essence of #MeToo become little more than, “I don’t need no stinkin’ evidence, my word alone should be enough to ruin someone’s life”?

Has the essence of #MeToo become little more than, “I don’t need no stinkin’ evidence, my word alone should be enough to ruin someone’s life”?

No, it hasn’t become that. It was always that.

A kiss on the cheek. She must be disappointed.

He has unlimited resources and all I have is proven LIE!

What’s the old saying? It’s time to pound the table!

She’s smart enough to quit while she’s ahead. Well hopefully her lawyer was doing it on spec.

That’s what the Democraps say!

And… another fake narrative died.

Quite the sisterly peck.

My face, when the plaintiff produces video of the offence, and everybody yawns.

Man, there are going to be a lot of people triggered next year with all the 2020 signs.

“Though Johnson doesn’t appear shaken in the video, she has repeatedly said that she did not fully appreciate the interaction until she heard the now-infamous audio recording from the Access Hollywood tape in October 2016, when Trump bragged that he used his fame to forcibly kiss and grab women “by the pussy.””

The Access Hollywood tape wasn’t bragging, so much as telling what he had observed. And according to the book by the former owner of Studio 54, he had observed exactly what he described — an a whole lot more.

He is not the first man to make such observations.

They really need to fire the person that hired her.

That was the typical European type air kiss. Notice she was smacking her lips during it, it’s not clear if Trump did likewise, but if he did, sorry, that wasn’t a forcible kiss.

If she was so upset over it, why did she kiss the air back instead of pulling away?

What a joke. She has as much validity as Blasy Ford, who it’s now coming out that her lawyer likely spilled the beans on her lie.

MeToo was always more about seeing if they could get a pay off or destroy a man’s life on just their word alone. It isn’t about justice. It’s about revenge, and the motives for wanting revenge could be rejection or not enough attention given to them.

Those with serious claims are few in between the liars craving attention. No due process means it can be a hateful as these women want it to be. Women can be heartless, sometimes more cruel and evil than a man. MeToo should be done away with, or have men do it in reverse against women, which would end it all in a hurry.

Looks like thos Beverly Hill kisses where you just bump cheeks and purse your lips…. The french do this all the time when greeting people.

My Italian cousins kiss me on the cheek harder than that. Jeez. Dumbest lawsuit ever. Everything is on video.

Seriously? I am going to file suit against my grandma-in-law! Haha!