“At no time have I considered resigning my position since assuming this role on Aug. 16, 2019.” 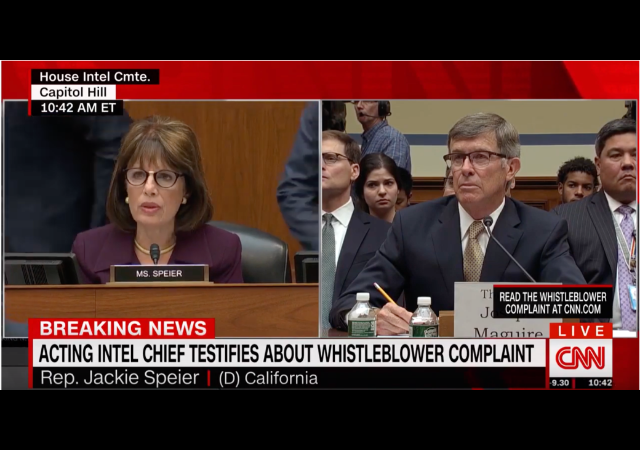 The Washington Post reported on Wednesday that acting Director of National Intelligence Joseph Maguire threatened to resign if the White House tried to influence his testimony in front of the House Intelligence Committee.

Maguire denied the report to Congress this morning.

The media and the left just cannot help themselves. They have to pretend or stretch the truth that chaos fills President Donald Trump’s administration.

Anonymouse sources, because of course, told WaPo about the supposed confrontation that “reflects the extraordinary tensions” between Trump and Maguire over the House impeachment inquiry:

The revelation reflects the extraordinary tensions between the White House and the nation’s highest-ranking intelligence official over a matter that has triggered impeachment proceedings against President Trump.

The officials said Joseph Maguire, who was thrust into the top intelligence post last month, warned the White House that he was not willing to withhold information from Congress, where he is scheduled to testify in open and closed hearings on Thursday.

Maguire denied the story on Wednesday, but also flat out denied it in front of the committee. From The Washington Free Beacon:

When Rep. Jackie Speier (D., Calif.) asked if he had threatened to resign, Maguire replied “I did not, and I know that that story has appeared quite a bit, and I issued a statement yesterday.”

Speier quickly cut Maguire off to ask if he was “shocked” by the whistleblower complaint.

Maguire issued a statement Wednesday denying that he said he’d quit if told to withhold information during his testimony before the House Intelligence Committee.

“At no time have I considered resigning my position since assuming this role on Aug. 16, 2019,” he said in the statement. “I have never quit anything in my life, and I am not going to start now. I am committed to leading the Intelligence Community to address the diverse and complex threats facing our nation.”

It’s the WP. I KNEW THE MINUTE IT CAME OUT IT WAS LIE.

You should as well.

I had a comment that got wiped out by this unstable page. This has become chronic. Also, there is some connection to a power rangers web page that keeps catching my cursor.

I’ve noticed a similar chronic problem, here at L.I., along the lines of ‘rick rolling.’ IE: a misdirection to another website when I either log-in, or simply click to read a post.

Just now I encountered this: [hxxps://trysafepersonalalarm.com/safety/protection2.php?zero=8asti87t43y8iksyth4iuktyh874e5gy5&affId=CB771A3E&power=gsiou7gyf8iwastgf47&c1=us&c2=smartdisplay_po50&win=asda343aew1231231231&gclid=EAIaIQobChMIhI2HzYPv5AIVlUI3Ch0y7wPiEAEYASAAEgJh1vD_BwE]

I’ve curtailed my visits here because of this (hopefully) unintentional rick rolling.

I’d do a virus scan.

It’s not a virus. It is the adds. Sometimes when you click on a comment, or up/down vote it will open up another webpage to and add.

Either ignore it or use an addblocker. I just ignore it, even though it can make commenting difficult.

Have you tried painting your teeth very rapidly with WhiteOut? Or, flushed baby carrots down the toilet?

there is some connection to a power rangers web page

Yes, I ran into the same WTF? thing.

If my time is going to be wasted, I’d prefer it be wasted on something a bit less frivolous.

Try to sound a little less like Democrats whining about something delivered to you at no charge.

I long ago stopped paying any attention the histrionics by the MSM regarding court intrigue inside the Trump administration.

Anything these malicious media moppets publish is suspect, and considered an outright LIE until proved true by other means, imho. They simply have ZERO credibility.

It’s not so much drama as a deliberate plant of disinformation (a.k.a. Fake News).

The Trump administration tried to get him to do something untoward, ergo . . .

Of course if he didn’t actually threaten to resign, well . . . he should have. Because Orange Man Bad!

It’s all propaganda, and quite primitive propaganda at that. I’m becoming a bit embarrassed that so many of my fellow Americans, even if they are brain-dead leftoids, can’t do better than this kid stuff.

tom — you may be correct that this was a deliberate plant of disinformation but don’t rule out the possibility that the reporters just made it up.

I wonder why the Progpnad amch8ien is at a solid 13% believability. I find that high but maybe many are and that explains the numbers.

Bezos’ Compost, where the truth goes to die in darkness.

“Democracy Dies In Darkness” is not WaPo’s tag line, it’s their mission statement.

Reliable anomyous sources say the whistleblower is Sue Gordon, and that she coordinated the report writing with Schiff’s staff.

I have no first hand knowledge of this, but it seems urgent.

Since the rumor is that the “whistleblower” is back at CIA, that sounds like a strong possibility. OTOH, repeating rumors is what got us to this point.

If these “news” reporters end up on the streets because people finally stop buying what they are peddling they have a career in fiction. Heck, they already are doing that, but are trying to sell it as the truth.

If it weren’t such a dangerous game they were playing with our country hanging in the balance, their fantasy would almost be comical.

I hope the rational people who vote are paying attention.

You mean to tell me that the Washington Post just made it up?! My God, how can that ever happen??