“I would expect more enthusiasm from our Native citizens!” 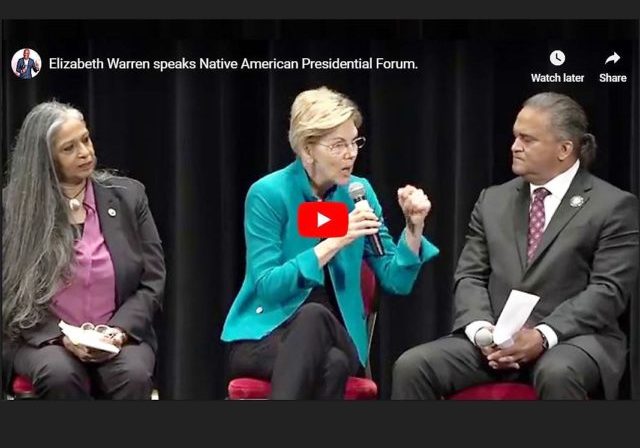 Democrat presidential hopeful Sen. Elizabeth Warren attended a Native American Forum Monday, where the moderator had to encourage attendees to clap for her.

"I would expect more excitement from our Native citizens"https://t.co/IXxuLTLSbF pic.twitter.com/wco5AmIapW

According to the Associated Press, Warren apologized to the crowd “over her past claim to tribal heritage, directly tackling an area that’s proved to be a big political liability.”

Democratic presidential candidate Elizabeth Warren offered a public apology Monday to Native Americans over her past claim to tribal heritage, directly tackling an area that’s proved to be a big political liability.

“Like anyone who has been honest with themselves, I know I have made mistakes,” the Massachusetts senator said at a forum on Native American issues in this pivotal early-voting state. “I am sorry for the harm I have caused.”

Monday’s remarks were an effort to move past the fallout from her past claims of tribal ancestry, which culminated in a widely criticized release of a DNA analysis last year. The issue nearly derailed her campaign in the early days as President Donald Trump began derisively referring to her as “Pocahontas.”

Warren has been scrubbing her heritage claims:

Elizabeth Warren’s team removed the parts of her campaign website that included her controversial claims of having Native American heritage, including DNA test results that showed she had only minuscule amounts of Indian ancestry.

Warren’s website until Sunday included a video of the Massachusetts Democratic senator getting the results of the DNA test, showing that she had between 1/64th and 1/1024th Native American ancestry, The Daily Caller reported.

Warren at the time said the results proved her claims throughout her academic career that she has Cherokee ancestry, a claim the Oklahoma native said was based on “family lore.”

The claims — and shaky DNA test results — prompted ridicule and charges that she was trying to advance her career by claiming to be a member of a minority group.

Reminds us of this:

For our extensive and in-depth coverage of Warren, see here.

Why pander to the Pander Bear if she offered something they wouldn’t need prompting.

No clapping, no surprise. She speaks with fork tongue. Like all politicians, she’s only saying it because her handlers say she has to.

Maybe they were expecting some of her Okie crab dip from Pow Wow Chow. What a disappointment!

Casinos are offering long odds on her nomination.

She’d have gotten more appreciation if she had offered some

I have more Native American ancestry than Warren has, yet I would never make any claim using that to get ahead or to gain a job.
She did. She profiteered off a lie. Funny how not one other person in her family made hay on being Cherokee, she did. She got jobs out of it. She gained wealth and status based on racial appropriation.
Her apology is as fake as her claimed ancestry. If she wants to make a real apology, hand over all the ill gotten gains she made through her lies, donate all of them to the Tribe she shat on. That would make a start.

Not only did she profit …. she caused Harvard to submit FALSE data to the Dept of Labor. There should be a penalty for that.

Between Warren’s far left views and her lying her way into an affirmative action position, I have nothing but contempt for her, and a lot of contempt for the Commonwealth of Massachusetts for electing her.

That’s why the dem residents are called Massholes.

What bugs me about “I’m sorry” apologies, especially where someone made great material gains from wronging others – they almost NEVER offer up remuneration of any kind.

If her apology is sincere, then she should part with some of her own accumulated wealth and an ongoing share (percentage) of her future earnings. Instead, she has a plan for the government us taxpayers to pay.

She’s a real piece of work that one …

She gamed the system. The bigger issue would have been ( and may well still be) if she displaced a real minority candidate because of it.

I suspect that’s why there was not much “enthusiasm” for her. Native Americans know her for the pretender she is. If she had an ounce of sense she’d back as far away from this as possible. But being who she is, she just can’t let it go.

Fauxcahontas came with a peace pipe and said (raising her hand) “How”. (I mean that’s the way Hollywood Indians talk).

For Fauxcahontas to be reviving the Indian heritage issue would be like Bill Clinton reviving his serial rapist issues. Not very smart. But then, what else has she got? She can’t run on “I am going to take everything away from you!”

LI shouldn’t forget to mention the Warren family’s multicultural moment. She claims N.A. heritage through the Crawford line of her family. The Crawford’s do have a connection to Native Americans, in that great-grandfather John H. Crawford shot an Indian in 1906. That man was named Lois Yaholar and the story ran in the August 17, 1906 Muskogee Times Democrat.

at least from the available information, her entire professional career has ben based or advanced on her fraudulent claim of being a native american–stevie wonder could see through her bs

and now, to have the breathtaking hubris to appear in front of the very group she gamed, attempting to compel their adulation in response to her transparent, heartfelt ” apology?”

Not mentally ill, but definitely sick.

liawatha built her career and her “image” on the lie that she was native American… now we’re on the “apology tour”..fetherless one

My advise to Lizzie …. get some plastic surgery to raise those cheekbones even higher!

She could be making a mistake, because Native Americas, while not a swing or significant vote almost anywhere, could be a tipping point in some important states: Wisconsin and Minnesota. New Mexico could potentially even be in play. A well positioned campaign about Warren appropriating culture, and most imporantly, NEVER doing a thing for “her community”, could tip those states red.

“I know I have made mistakes.” “I am sorry for the harm I have caused.”

An genuine apology includes the offer to make amends and a question, “how?”
She has nothing to offer. She systematically lied to leverage off identity politics.
She has no shame and she will disappear into political oblivion as a jocular footnote.

For a sincere apology, you’re supposed to apologize for that exact thing you did. Elizabeth Warren just gives a very general apology. That is a false, insincere apology.

Oddly enough, some tribes hamstring themselves. Those that wise up, do not hold all tribal lands as communal property. Those tribes are doing far better. Those still in collective tribal life socialism, are suffering the usual outcomes.