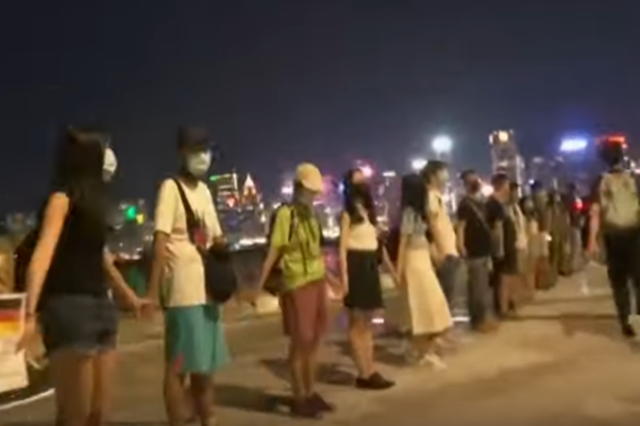 Violence escalated during the 12th consecutive weekend of pro-democracy protests in Hong Kong, as riot police fired tear gas and baton-charged protesters while demonstrators responded by throwing bricks and other objects.

Thousands of protesters took to Kwun Tong district in the city’s east on Saturday, reiterating the five demands that have emerged during this pro-democracy movement, and adding an additional issue: the government’s installation of “smart” environmental monitoring lampposts, which have sparked privacy concerns.

Protesters attempted to tear down or dismantle the lampposts, while others gathered on the streets and formed barriers. Protesters have been seen with a slingshot, iron bars and bricks, while riot police fired back pepper spray and tear gas, making it the first time in 10 days since tear gas was fired.

In a statement on Saturday evening, the Hong Kong government condemned the “vandalistic and violent acts of the protesters” and said that a number of smart lamp-posts were “deliberately damaged.” The government added that the smart lampposts “do not carry facial recognition function and would not infringe upon personal privacy.”

BBC News – Hong Kong police fire tear gas at protesters in fresh clasheshttps://t.co/VaCABd2bIw This is the result perpetuated by being ruled by tyrants dictators and degenerates who because of inflated egos subject us to fight for freedom. Fuck all tyrants dictators degenerates

Friday evening, protesters formed a 28-mile human chain across 39 train stations in a show of unity that was inspired by an example seen in 1980 during the collapse of the Soviet Union.

The demonstrators sang songs as they held small signs that said, “Thank you for supporting freedom and democracy.”

The latest demonstration in the 11-week movement that stemmed from outrage over a proposed extradition bill was inspired by 1989 protests across Baltic states.

“I joined the Hong Kong Way because it’s peaceful,” protester Peter Cheung, 27, told Reuters, referring to the campaign’s name. “This is the 30th anniversary of the Baltic Way. I hope there will be a bigger chance to make an international noise.”

Chicago-based United did not directly blame the suspension on the anti-government protest crisis that has gripped Hong Kong since June. The Post has learned that the Chicago-Hong Kong route was losing money before passengers began decreasing more rapidly in recent weeks.

“Given the reduced demand for travel between Chicago and Hong Kong, we have determined that it is best to suspend our service,” the airline said in a statement. The last flight from Chicago will be on September 8.

A Christian hymn is the anthem of the protesters.

The hymn, “Sing Hallelujah to the Lord,” written by Linda Stassen in 1974, was heard resonating from the voices of hundreds of thousands of demonstrators, in a city where it is estimated 1 in 10 people are Christian. While the song holds special religious significance to the many faithful in the crowd, the hymn was sung by even the religiously unaffiliated, in hopes that it might protect them from governmental scrutiny.

As the hymn is a religious song, the protesters hope that they can be protected under the city’s safeguards of religious freedom.

May God be with the good people of Hong Kong.

Must be hard living in a place where people were given a taste of freedom, only to have it snatched away later. I’m hoping the people of Hong Kong secure their freedom and future, and we don’t have another Tianamen Square there.

the the Chicoms HAVE to crush this, lest it infect the rest of the country, and thus knock them out of power.

those fearful old men will not give up power easily.

Those fearful old men think that they should have the power to sacrifice the lives of people they don’t know, in the interests of the general welfare of the country. They do not respect the intelligence or capability of their own people. For that reason, they do not trust their own people to make their own decisions.

Meanwhile, tiny Hong Kong thrives, while the main body of China progresses in fits and starts, because the old, fearful men making the decisions are too far away from the facts.

The Chinese tyrants should be asking the advice of the people of Hong Kong, and the question should be, “How do we better, promote the general welfare of our country?”

Harming Hong Kong is like killing the goose that laid the golden eggs.

The government added that the smart lampposts “do not carry facial recognition function and would not infringe upon personal privacy.”

Well, all right then. Since they said so, it must be true.

We should always believe communists…
.
.
.
They only murdered 100+million people in the last hundred years.

The only credible negotiating card they hold above the US is their willingness to kill millions of their own citizens. With common sense having been abandoned by the Masters of the Universe on their way to building their centralized global government and with the Dem candidates proposing a combined $22+ TRILLION of new spending for their programs, is it inconceivable that the next world war will see over a billion people killed?

dKeep in mind that the Russians and Germans suffered the most casualties fighting each other and were willing to accept that cost. Chiang Kai Shek was even less warm-hearted and he was toppled by the man who murdered more people than anyone in history… and almost all his own people.

We better stop this while we still can. We hold ALL of the important strong cards and better be willing to accept the relatively minor discomfort it would bring or we will certainly lose this fight.

To fine tune my final point, I am referring to America’s habit of blaming itself for all of the bad things that happens in the world. China is holding its own people hostage against that particular US weakness. Were Xi to start killing his own people, we have to hold strong. It’s up to the Chinese people to fight for their lives. It’s up to give them reason to hope that they will win by not knuckling under to such negotiating tactics when we hold the winning hand. Time is on our side if we hold strong.