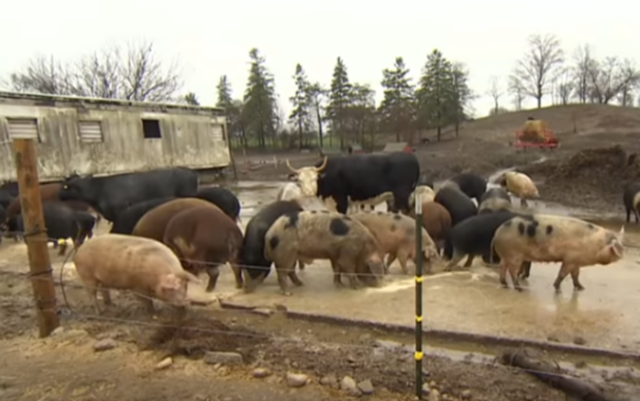 The world is looking at a potential shortage of bacon and other pork products as African Swine Fever, nicknamed ‘Pig Ebola’, has spread through Asia.

Last August, a farm with fewer than 400 hogs on the outskirts of Shenyang was found to harbor African swine fever, the first ever occurrence of the contagious viral disease in the country with half the world’s pigs. Forty-seven head had died, triggering emergency measures including mass culling and a blockade to stop the transportation of livestock. Within days, a government notice proclaimed the outbreak “effectively controlled.”

It was too late. By then, the disease had literally gone viral, dispersed across hundreds of miles in sickened animals, contaminated food, and in dirt and dust on truck tires and clothing. Nine months later, the contagion has spread nationwide, crossed borders to Mongolia, Vietnam and Cambodia, and bolstered meat markets globally.

While official estimates count 1 million culled hogs, slaughter data suggest 100 times more will be removed from China’s 440 million-strong swine herd in 2019, the Chinese zodiac’s “year of the pig.” The U.S. Department of Agriculture forecast in April a decline of 134 million head — equivalent to the entire annual output of American pigs — and the worst slump since the department began counting China’s pigs in the mid 1970s.

Thailand has now banned the import of pigs from Myanmar, in hopes to stop the spread of the highly contagious virus any further in Asia.

There is no vaccination for African swine fever, which causes pigs to internally hemorrhage until they die.

The only option to contain the disease is to kill any contaminated animals.

Some estimates say that in China up to 200m animals may eventually be slaughtered.

The virus can last for several weeks on anything from clothes to vehicles. Allowing for it to easily travel long distances.

Eastern Europe has also been battling ‘Pig Ebola’, with the most recent cases being reported in Serbia.

While most affected countries in the region aren’t major pork producers, they remain in close proximity to key exporters further west. African swine fever has leaped into the global spotlight, as China — home to half the world’s hogs — and other Asian nations lost millions of pigs from outbreaks that began a year ago.

“The outbreak situation in eastern member states remains pressing,” Rabobank analysts said in a July report. Risks of the disease’s spread have spurred “pessimism” among producers in northern Europe and discouraged herd expansion.

If there is any good news to be had in this story, it is that American farmers may benefit from meeting the global pork demands.

… China is a willing buyer of American animal protein despite the ongoing trade war between Washington and Beijing.

“I am not sure how much more serious the trade war will get, but my expectation is that China will continue to buy U.S. pork,” said McCracken. “There is currently not enough pork (or other protein) available in the rest of the world to fully meet China’s protein needs. We expect U.S. pork, beef, and poultry to help fill the void until China can rebuild its internal supplies.”

Meanwhile, economists are worried that the escalation in meat prices in Asia could drive inflation.

“The most obvious channel through which this will impact (emerging markets) is via higher inflation,” James Swanston, assistant economist at Capital Economics, wrote in a note last week.

“If the disease spreads and increases in severity, it would probably make a notable contribution to inflation in parts of Asia … and Eastern Europe,” he said.

Poor pigs, you have to think it’s got to be the massive farms

Farms not so massive in China, there’s not room for massive anything. That’s why they need to import pork.

Downvote — from someone who’s ever flown over China and seen the lack of wide open spaces?

So… China is of course hopping mad at us and our President…
Where they going to find their swine now?
Anybody want to join me in circumventing China Sanctions and smuggle some pork through straw sellers??? lol…
I hear they are eating more chicken.

i’ve got a restaurant size freezer out in the back yard by the grill/smoker/beer frig.

time to go buy a couple hundred pounds of bacon and stuff them in there.

Just a few days ago, China was going to retaliate against Trump’s new tariffs by refusing to import hogs from the USA. Somebody was so worried about saving face that they didn’t engage their brain before saying that …

Especially because 10 or 15 years ago, a Chinese company bought our pig processor Smithfield Foods just so they could import pork back to China. So now China embargoes pig imports, and this company can’t send its pigs back home. Maybe they’re just playing with words and once the pig is “processed” the meat can be sent back.

And it would not surprise me in the least to find a Chinese bringing in viruses, bacteria and fungi to destroy the American food industry.

I knew a guy who had 6 large hog barns. And, they were clean operations. You had to Shower and change going into the barns.

That embargo is worth exactly what the Chinese want it to be. If they want to import US hogs, they’ll do so.

So much for “WTF is Trump talking about? We know nothing about asking to reopen negotiations. They are such liars and they are emboldened by our domestic enemies doing everything they can to trigger a US recession. Winning!!!

We have a few democrat swine they can stir fry

Who can afford bacon as current prices, anyway?

We have millions of feral hogs in Texas and the south and west. We can trap them and sell them to China.

We need to set some of the 800 lb “hogzilla’s” loose in the Chinese countryside. That’ll keep ’em entertained for a while.

Photo reminds me of Portland OR

Sounds like a bacon surplus for the US, then.

I’ve got a fat pork belly curing in my fridge right now. In a few more days I’ll cold-smoke it with a combination of Hickory and Apple wood. Mmmmmm bacon. Luckily I still have some from the last batch, I think I’ll go fry a few slices.

You beginning to understand why China doesn’t need American soybeans?? ITs only animal feed and they have no animals to feed them to.

Is it too late to go long on pork belly futures?

We will meet that demand for a price.