“Noose” Found At U. Michigan Hospital Turns Out Not To Be A Noose

“Noose” Found At U. Michigan Hospital Turns Out Not To Be A Noose

“spool of rope utilized for medical procedures was being used by a person on a break to practice tying a ‘Uni Knot,’ which is a type of knot used for fishing” 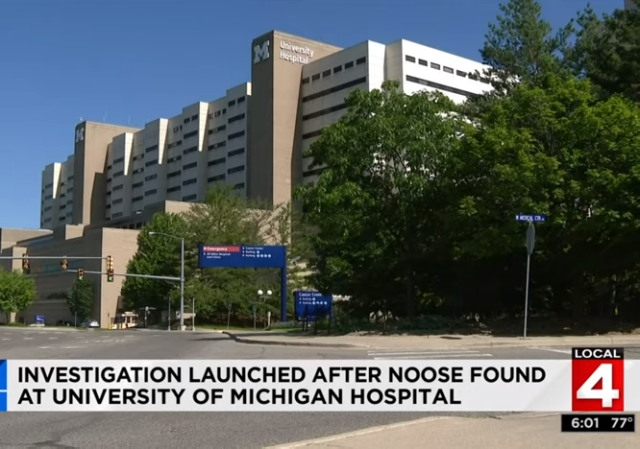 A few weeks ago, the University of Michigan Hospital launched an investigation after a supposed noose was found on an employee’s desk. Now the investigation has concluded after finding that it wasn’t a noose at all.

The university’s Division of Public Safety and Security released this statement:

Following an extensive investigation, the University of Michigan’s Division of Public Safety and Security (DPSS) has concluded that the rope resembling a noose found at University Hospital was not the result of a hate crime.

On June 20, 2019, DPSS received a report that a Michigan Medicine employee found a spool of rope with a knot in it resembling a noose sitting on a shared workspace in University Hospital.

Based on multiple witness interviews and other evidence, DPSS does not believe that the incident involving the rope was a hate crime. If relevant new information comes forward, the case will be reopened.

During the investigation, it was learned that a spool of rope utilized for medical procedures was being used by a person on a break to practice tying a “Uni Knot,” which is a type of knot used for fishing. When the spool was returned to the storage area, the knot was still in place and discovered the following day by an employee.

So it was a Uni Knot. Those are apparently a common sight among fishing enthusiasts:

Knot of the Week Video: Secure a Fishing Hook in Low Light with the Uni Knot ➝ https://t.co/S64fMsBtaB pic.twitter.com/WnyRjDE7xe

When this story first broke, as usual, it was reported with a sense of panic by many media outlets.

From the New American:

MichiganLive.com opened its breathless report on the medical-school hate hoax in Ann Arbor this way:

“University of Michigan police are investigating a possible racially motivated threat against two Michigan Medicine employees who found a noose left in their work area Thursday, June 20,” the website reported.

Thus did the dean, Dr. Marschall Runge, spring into action: “Yesterday, in one of our hospitals, a noose — a symbol of hate and discrimination — was found at the work station of two of our employees,” he warned. “We have taken immediate action to have this investigated as both an act of discrimination and a criminal act of ethnic intimidation.”

Intoned Runge, “this act of hate violates all of the values that we hold dear and will not be tolerated.”

WDIV News in Detroit noted that students were “disturbed” by the situation:

Well, everyone can rest easy now.

It was just another campus panic over nothing.

No noose is good noose.

I understand that Nathan Hale had a brother who was an incorrigible and thoroughly unrepentant punster.

He, too, was captured by the British and asked if he had any last words when taken to the gallows.

His replied with the above jaunty comment, whereupon the trap door was released.

The rope broke and he sprinted away, running through the village streets shouting,

That ITS Tactical website seems very interesting and useful. Finding it almost outweighs reading the puns in the Comments!

Has there been a legitimate sighting of an actual noose in the wild within the last few decades?

this is getting to be more ridiculous than “I saw Bigfoot lookin’ at me through my bathroom winder! And his hair was real purty!!!”

maybe even more like reports of demons and devils dancing and gibbering on the rooftops at night back in medieval days.

Thanks for this. I’ve used the Improved Clinch Knot for decades and now find that the Uniknot is far better in braided line and stronger in monofiliment too. I’m switching to the Uniknot.

I stick with the palomar. It’s a little difficult to tie with big baits, but stronger than most others.

UM would convict all Scouts who have mastered the 10 Basic Scouting Knots as “unrepentant lifelong racists.“

“Hate crimes are so prevalent in the United States today that we have to make some up to call attention to them.” – The Left

There are only a few possibilities here. One is that people are so ignorant that they don’t know what a noose looks like so they basically freak out over anything with a loop in it. This, however, also requires complete ignorance of all the other uses for rope and for knots. Shoelaces, for example.

Or they might just lie about what they think because they would rather point fingers and promote hate and fear than tell the truth.

To me both are ridiculous. Apparently to the left, at least one of them is quite reasonable.

Well, it is a hate crime for a Walleye or Northern Pike.

Supposing it were a noose, where would the crime be?

Are you looking for a statute? We don’t need ’em anymore. Crime is what we say it is.

Some see nooses where there are none. Others see Satanic messages hidden in soap company trademarks or hear them by playing phonograph records backwards.

They are lucky that neither Krislov nor Varner are there anymore lest the University gets sued for $50M by the time this is over.

It is immaterial whether or not it was a noose. The key point is it was rope and COULD HAVE been a noose. U of M needs to shut down for a week or two and self-criticize.

These people need to relax.
I would recommend Yoga, but I’m afraid they will get triggered and call it ‘cultural appropriation’.
The left is in a perennial catch 22 .

Nooses were a knot in common use to hang criminals. Perhaps the person triggered should confess to the misdeed and clear her conscience.

A hospital, a clinic perhaps, a chamber with walls… repent and sin no more. Alternatively, a “noose” in use for a “planned” prosecution without consent.

I prefer a cinch knot myself because it’s faster and I have fat fingers, but, to each his own……

Best fishing story of the year. “Hospital gets trolled by self. Falls hook line and sinker.”

I was half-expecting it to turn out to be a rodeo roper’s lasso, misidentified — as they so often are in the clues — by a crossword puzzle creator.

Every time I see NOOSE as the answer to “Rodeo cow catcher” or some such, I want to string somebody up.

In the spirit of it not being legal to shout “fire” in a crowded theater, is there ANY chance we could put the brakes on the media’s Racism Hysteria? Seriously. This is beyond ridiculous. They need to be fined every time they mention race, racism or hate crimes before all the facts are in.

No, there is not.

The “falsely shout fire” line was a cheap and dishonest argument in an opinion that has since been thoroughly discredited and rejected, and I wish we could fine anyone who uses it in modern debate. The first amendment does indeed not protect someone who falsely shouts “fire” in a theater and causes a panic, but that is not an open door to ban other kinds of speech by false analogy. The exceptions to the first amendment are few and very well known, and no more can be added.

I am surprised they found an adult or two to conduct a real investigation. This is a University after all…

These neurotic children would not have survived a single day of normal life if they had been alive when I was young. We were more grown up by the 2nd grade than these modern college students or employees are after wasting oxygen for decades.

A vast segment of the American populous is delusional. And, the people of this country have been indoctrinated for the last 50 years to believe that racial animosity [racism] is the basis for everything that occurs. Refuse to gove your money to a black hold-up man and YOU are a racist. point out to a black or Latino that the reentry angle he has calculated will cause the reentry vehicle to burn up and you are a racist; even if the reentry vehicle burns up for that very reason. I watched a a white man, of German-Jewish descent on The Ingraham Angle last night claim that because his German-Jewish Caucasian naturalized citizen grandfather was told to go back where he came from, because people did not agree with his points of view, this was racism. Unless the people telling this German-Jewish Caucasian to leave were Black, Asian or Native American, then this was NOT racism. But, this liberal/Progressive Democrat seems to THINK that it is.

I tied a timber hitch the other day. It’s still a permitted knot.

The older folks, I hesitate to call them grownups, who jumped so self-righteously on this and so fast either know this sort of thing is usually a hoax, or is almost certainly a hoax. And if isn’t a deliberate hoax, it’s a mistake.
But they can’t afford to seem unimpressed by it while it’s being sold as a hate crime. So, even when they know better or know to wait, they can’t afford to.
Being seen as silly afterwards is a small price.

The multiple loops in the knot are an obvious dog-whistle to noose-tiers.

Unless they were going for blackfish or jewfish

Since when did the noise become “a symbol of hate and discrimination”? I would guess that lynchings were generally done with a slipknot, as most people don’t even know how to make an actual noose.

Incidentally, my old boss had a noose in a shadowing on the wall in his office. He was black and ex-military, and nobody ever gave him any crap about it.

This story reminds me of another in the not too distant past. https://www.dailywire.com/news/42851/seeing-racism-everywhere-photo-soot-covered-coal-ashe-schow

Context is important. Recognizing that your worldview isn’t perfect and can be wrong is another important thing. Somewhere along the line we’ve lost context. I probably wouldn’t have recognized the fish hook knot either. I might have identified it as a knot though. Girl Scouts yay! The point is that we need to start recognizing that a myopic viewpoint is not of value. Every knot is not a noose. Every photograph of a group of men with blackened faces (coal miners) is not black-face.

The eternally offended have closed their minds and have one view and bend everything they see to fit within the context of that one view.

Boy, these libtards are cocked and loaded for something to whine about aren’t they?