Charity provides gently used eye glasses to those in need both locally and around the world. Thanks so local regulators, they may not be able to continue holding local clinics. 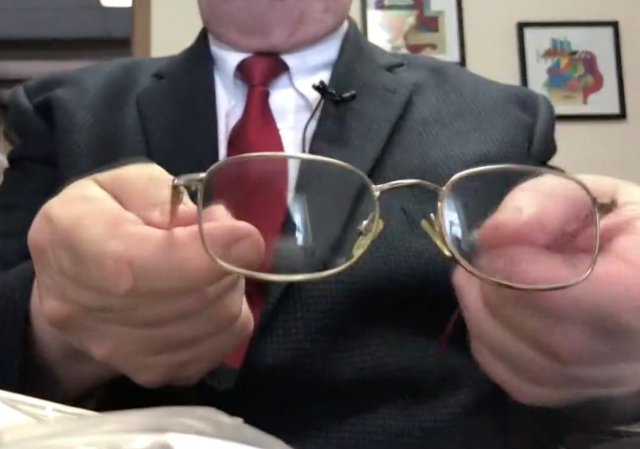 Kendall Optometry Ministry, Inc. was created in 2003 and has been serving homeless people around the world ever since. They provide gently used eye glasses to those unable to afford them. Their equipment has been used in 79 countries.

Each year numerous mission and humanitarian groups travel from the United States to underdeveloped countries throughout the world. Those groups which have optical teams are frequently not well prepared, utilize untrained personnel and have little participation and guidance from professionals. Often large optical teams run by professionals are unaware of new automated methods to properly utilize the huge available supply of used prescription glasses.

Kendall Optometry Ministry first discovered the shortcomings in optical ministry during a mission trip to Honduras in August, 1999 and left with a God given passion to do it better.

Techniques and software developed by the Kendall Optometry Ministry allow teams to effectively assist 3-5 times as many people as before. Many teams have reported that nobody was ever turned away without significant improvements in their vision. In most cases very long lines are shortened or even eliminated. On the average it has been reported that one patient has been fitted with a pair of used prescription eyeglasses every 3-5 minutes.

It’s an extension out of Fern Creek Baptist Church. A letter he received a month ago is calling for an end to these free clinics here in Kentucky.

Kendall believes it’s his duty to help people see, “because I know that there are people on the streets in Louisville who would be off the streets of Louisville if they could see.”

He says not everyone is able to afford eye care, “These are all of the glasses that we have for this free glasses clinic. Those glasses are automatically selected by a computer program that I wrote which is on this desktop right here.”

This equipment has been used in 79 countries. The person’s eyes are measured and the computer prints out a list of glasses that match the prescription. You can find the glasses through their filing system.

Glasses come from The Lions Club and other organizations, “We don’t give out glasses that we would not wear ourselves.”

Kendall said, “Optometrist by law have to hand out new glasses and these are used glasses. We understand that that is reasonable.”

The Ministry held another meeting in March and received a letter saying in part, ‘It would be a violation of law if eyeglasses provided are not new, first quality and made to meet the individuals personal prescriptions. ‘Going on to say that ‘they need to have a license.’

“We are not trying to hurt anybody. If we thought this ministry was harming anybody, we would never do it,” said Kendall.

Kendall is going up against the Board this weekend. The non profit has a free clinic at Norton Healthcare at the end of July, depending on the Board’s ruling, they may have to cancel it.

Heaven forbid someone receive less than perfect help and thank goodness we have local regulating boards to ensure no one is harmed by a pair of eye glasses!

Oh come on! We know who is behind this. It is the eye doctors and optometrist who make their living selling glasses. This is the same type of criminal lobby that prevents people from platting hair for a living if they haven’t been to beauty college.

I have to disagree here. I’m an optometrist in a different state, and the use of previously used eyeglasses in the industry for charity is common and almost ingrained into us as students. There are organizations like VOSH that organize eyeglass drives and even help to perform exams on people in disadvantaged areas. Most offices, like mine, have Lions Club collection boxes specifically to collect glasses.

In any event, these are not the patients that most eye doctors are looking to sell glasses to. These are patients that would likely be on some kind of state aid, and for the most part these are not exactly high dollar patients. I’m an outlier in my community in that I take the state aid and dispense those glasses, many office have decided it’s not worth their chair time.

So while I’m sure that there are some optometrists that might have a problem with this, I have yet to meet one with anything remotely like an objection. I would be very curious why the state board objected.

This does seem to be a case of the state licensing board trying to “protect the public” Yet in reality, trying to protect the guild.

I am a CPA, and most of the state licensing boards for CPA go to extreme lengths to prevent non CPA’s from performing any “accounting ” functions to the general public. The Texas State board of public accountancy, virgorously enforces the rule for any non CPA’s from using the term or any variation of accounting in advertising, etc.

What they fail to realize is that CPA v non-CPA’ are serving different market niches, so there is really no market niche to protect.

Rent seeking by the optomitrists/opthomologists, nothing more. It looks like they would rather see people stumble through life with bad vision than get fitted with used equipment. Disgusting.

IIRC Pacific Legal Foundation helped someone who as barred from entering the business by restrictive state laws get licensed as a moving company several years ago now. Legislators are quite willing to throttle competition in exchange for a significant campaign contribution.

I swim for general fitness. You can buy quasi prescription swim goggles (for nearsightedness) for $25 whereas the regular swim googles cost $20. They are surprisingly very good, especially for $25.

My impression is that the typical eyeglasses have a huge mark up due to the limitations on where they can be sold.

Therein lies the guild that they are trying to protect.

We’re from the Government and we’re here to help.

Having cleaned up the Lemonade stand problem….

Thank goodness its still legal to poop in the street.

What is so often forgotten, in the entire context of Americanism, is that the chief objective of the Framers was to structure freedom through self-rule & personal-responsibility to the greatest extent possible, and that this is best achieved through Freedom FROM Government.

An excellent, and given that July 4th* is nigh, and an appropriate, video (30 minutes) will serve to make this point.

Overview of America, by J. McManus,

*Celebrating independence from Britain, the Big Government of its time

Thanks, that was helpful.

The Lions have been collecting used eyeglasses for charity for years. WTH is wrong with these people? God forbid a needy person should be able to see better with (HORROR OF HORRORS) used glasses with an appropriate prescription.

Just use the standard S stroke 1798 and write in “Pizza” where it says “Machine Gun”.

Seems like an opportunity for Sen Rand Paul, MD (Ophthalmology) to jump in and help.

No. It’s a local issue and people should solve it at the local level. National publicity is good, but we don’t need the feds to step in, do another power grab, and create uniform regulations for the whole country.

Dude! Paul is the senator from KENTUCKY and has been involved in similar charitable efforts in the past.

This particular crisis is actually obsolete. New glasses—frames and prescription lenses—are down to about $7 retail. (Chinese, of course.) I use them myself, for presbyopia and mild astigmatism, although admittedly I’ve moved upmarket to the $10 ones.

Despite this, the more general problem of bloated government working overtime (haha, not really) to ruin everything remains.

The solution is simple if we just think outside the box. The State of Kentucky needs to implement a free LASIC program for all its citizens. Then, no one will need glasses, gently used of otherwise. problem solved.

Government boards and employees are their to first help government employees, next to help their cronies, after that to help those who can be bought by government and then, if anything is left, the working taxpayers. I believe government has gotten so bloated that every new program or idea implemented does more harm than good to everyone except the government employees that gain power and job security. The optometrist I go to doesn’t have a pair of frames under $100.

Wrong their there. Saw it just as my finger touched submit.

The professional boards have a clear choice: obstruct or support.
Perish the thought that they might charitably assist public or profession by contributing to the differentiation of medical eye problems from refractive requirements.
Has any money garnering bureaucracy administering to a professional body ever genuinely helped its inmates legally captive subscribers?
Were the beneficiaries labelled as “immigrants” I suspect the virtue signalling would be strong.

Thank goodness the Clinton Foundation has undergone such scrutiny. (sarc)