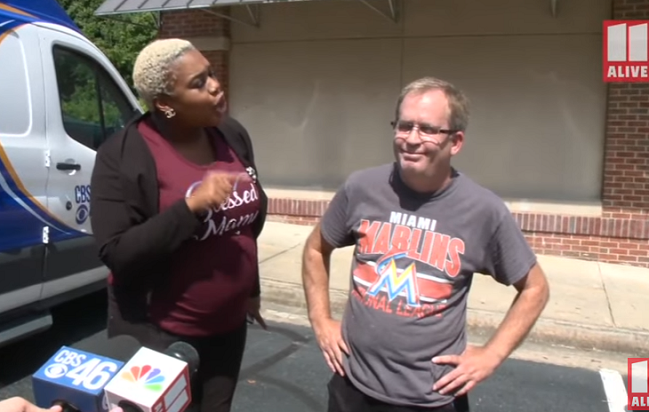 Georgia State Rep. Erica Thomas (D) claims to have been “verbally assaulted” by a white man at a Publix and told to “go back where you came from.” Apparently, Thomas was in the 10 Items or Less lane, and Eric Sparkes didn’t like that and commented to her about it.

Thomas went on Facebook and filmed a tearful tirade about how she was berated, called names, and told to go back where she came from. She also says that he told her to “go back to your country.”

A white man has admitted cursing at a pregnant black Georgia lawmaker for taking too many items into a supermarket express lane but denies telling her, “go back where you came from.”

Eric Sparkes showed up during a WSB-TV interview with Rep. Erica Thomas of Austell on Saturday, outside the Atlanta-area store where the incident occurred , the station reported .
He denied making any racially charged comment, adding, “I am Cuban.”

Thomas confronted Sparkes in front of reporters and said he had “degraded and berated” her.

She has told The Associated Press she notified police and will seek store video.

As a result of Thomas’ video, the incident went viral and a range of people from Democrat presidential hopefuls to celebrities to random Twitter users all piled on. #IStandWithErica was formed, and everyone who was anyone was outraged by the outrage. Because Trump.

And here’s a sampling of the response from the left:

These are the consequences of a president who foments hate every day—and sees our diversity not as a strength but as a weakness. Erica, thank you for serving your state and thanks to your husband for serving our country. We are better than this, and together, we will prove it. https://t.co/eCrdZFgAPl

Let’s be clear: this is on @realDonaldTrump and every single person who refuses to condemn his vile racism. #IStandWithErica https://t.co/Asx5kZaqbs

We have a serious problem in this Country when @itsericathomas is subjected to racism in a Cobb County @Publix in front of her daughter. #gapol. #IStandwithErica thank you @RenittaShannon for alerting me and the @NAACPGA. #NoPlaceforHate. pic.twitter.com/hN5HDS4aG9

The outrage continued unabated until Sparkes stepped forward to tell his side of the story.

It appears that @tedlieu has deleted his #IStandwithErica tweet now that her story is being walked back. This isn't the first time this has happened. Maybe next time he will wait to find out the facts before using a story to try to score political points? pic.twitter.com/1I2SmqK3DB

A lifelong Democrat who uses his own Facebook page to rail against President Trump and Republicans, Sparkes is upset because he feels that he is being smeared by Thomas “for political gain.”

He defended "the squad" this week on Facebook against Trump's attacks pic.twitter.com/ldWvrYGyqJ

Now Thomas is walking back her accusations and claiming that Sparkes “can’t get away” with the “simple assault” against her because “people just can’t go out in public and berate people.”

Erica Thomas is now walking about her claim that she was told to "go back to your country." pic.twitter.com/mMVhT2QSEk

Watch the confrontation between Thomas and Sparkes the day following the incident:

Towards the end of the interview, Sparkes insists that he is not racist and that he cannot abide bigotry and racism, having experienced it himself as a boy whose grandmother could not speak English.

Sparkes said she told him the same thing, and he responded, “It doesn’t matter during this case … There’s two empty lines — you don’t need to be in the express lane.”

In an exchange shown on video, Thomas asked, “What did you say to me then?”

“I called you a lazy bitch. That’s the worst thing I said,” Sparkes answered.

Sparkes said he’s a Democrat and was being unjustly attacked for political purposes.

. . . . During the television interview, she said Sparkes “needs to be held accountable because people can’t just go out and berate pregnant women.”

Here’s that interview in full:

I’m not seeing the most important piece of information – are we talking 11 items in the 10 item lane, or more like 30-50?

Two empty lines and goes to the express line with too many items?

And how’s the guy supposed to respond? “Thank you for skipping two empty lines and delaying me from checking out with a gallon of milk by holding up the express line with too many items!”

In all honesty, the guy was not delayed because she was in the express line. He said it himself: There were 2 empty lines. He could have gone through any of the 2.
If we give him the benefit of the doubt, maybe we could assume that he was trying to do the right thing by pointing out a wrong. (Note : IF)
But don’t get me wrong. The one at fault here is the woman, any way you look at it.

“I’m speaking truth to power and against the White Supremacist Patriarchy by taking 25 items in the ’11 items or less’ line!”

Root for the person who bought the popcorn you are eating.

I didn’t catch where she challenged the accuracy of the “lazy bitch” comment Mr. Sparkles admitted to. Is silence considered agreement?

Just checking the hierarchy of liberal reaction to insults:

Calling someone a “lazy bitch” is ok but saying “go back where you came from” is worthy of national news and commentary from candidates for President?

I thought calling certain minorities “lazy” was considered very racist but I guess things have changed in the last week.

In some circles, the b-word has become a term of endearment.

I must be racist because i believe him and not the fat black rude loud bleach blond.

How on earth, is this corrupt lying SOS allowed to remain in State Congress?

“Allowed”? By whom? Who do you think should remove her, and on what grounds?

Milhouse, your comments are usually so insightful. But in this case, I don’t know what you are trying to suggest. I would think the answer would be the voters. Don’t you agree?

“people can’t go out in public and berate people”….oh my that’s rich coming from a Democrat because that’s exactly what they do and demand all their trained seal followers do whenever they see a Trump supporter…

Per order of Mad Max Waters.

Also, this is childish BS. EVERYONE needs to grow up.

What she meant was, “People can’t go out in public and berate me.”

I guess that no one remembers thee story of the Boy Who Cried Wolf. This obsessive “everything is bigotry and all minorities are victims” BS has gotten to the point that no sane person believes it for a moment. The only people who seem to believe these absurd charges are those in the media. Pretty soon, even those who are actually the targets of racial discrimination will not be believed.

How about this idea: They were both wrong.

How about this idea: They were both wrong.

I am amazed at how this guy was able to remain cool when this nutcase interrupted his interview and started railing on him.

Meanwhile, when did “black and brown” become an appropriate way to identify people? Clearly, it’s not accurate because Mr. Sparkes is in her “brown” category but he’s not brown enough for her.

“I am Cuban” is some sort of shield against charges of racism. I didn’t know that. If only George Zimmerman knew that.

His mother is Peruvian, not Cuban.

Further complicating matters is the fact that George Zimmerman’s great-grandfather was black!

The fat negress lied. Will democraps call her on it?

Come on — don’t you know that dark skin pigmentation inoculates Leftists from accountability in all situations? It represents a grant of total immunity, in all matters.

Hmmmm… judging by their reaction to that lying, agitating sow Abrams I’d have to guess “nope.”

The Dems and their media buddies are going to do everything to play things like this up whether they are true of fake. The other thing they are doing big time is running stories about white supremacy.

Another “white Hispanic,” stirring up trouble…

I don’t know why she needed her husband there to protect her. She’s twice his size.

I highly recommend watching the 1st 11 Alive, Sparkes interview with the Sparkes/Thomas confrontation…it is COMEDY GOLD !!!!
(WAY better than ANY current SNL skit) 🙂

These two should have some kind of reality/commentary/daytime talk show…They are GREAT together..!!!!

By the way….this is why I always use the “self-checkout” !

In her interview, she starts out by saying “simple assault” in some unclear context.

In his interview, he says no crime was committed.

But a crime was committed, slander by HER against HIM.

What a cuck he is, to continue worshipping the Dems, and not to consider that he’s a victim here.

The left have turned on each other.

erm, I guess that’s a tort not a crime. But the evidence is all there, if he’s not too much of an SJW why doesn’t he haul her into court?

He has quite a defamation lawsuit against that fat POS.

Do not expect someone to know how to count that can’t read.

How is this large person’s hair color not cultural appropriation?

No, that’s the bleach!

You see, that white/Hispanic/Cuban Democrat redneck cracker was gonna put a noose around her neck & pour bleach on her, but only got as far as the bleach! That’s apparently because he was fumbling with his Subway sandwich, though CNN hasn’t yet confirmed this.

CNN, your trusted source for the most distorted version of the news available anywhere!

As the wise LaVar Ball insightfully once said, “Stay in yo’ lane.”

Uhm, Maxine was ok then? Conservatives being screamed out of a restaurant by a mob is ok then? bleep that.

That was some impressive sobbing by this tough broad in the first video. An onion must have given its life for that!

The trifling liberal SJW just could not abide a woman taking too many items through the express lane despite the fact that other lanes were open for his use and it did not adversely affect him. Most people would not have given such a trivial issue five seconds of thought, but he just had to give her a piece of his mind after trying to register his outrage with indifferent management and employees. His outrage at such a trifle led him to go through two stages of lodging his very necessary complaint!

The return payment for being the SJW worrying about trifles by others is just priceless. Then she got caught for lying and two Dems are beating up on one another. Screw both of the useless maggots!

Totally agree and they all should be called out. Preg. woman should have used the correct line. Cuban boy should have just sucked it up and just went to a different line, but both victims, they are screaming at each other and we are drawn in to “their” drama. They are all looking for a audience to support their spoil brat victim-hood.

As my teenager says, “Suck it Up Buttercup” If Trump really wants to get them he should say the democrats should “Learn to Code” so anyone reporting it on tweeter gets banned.