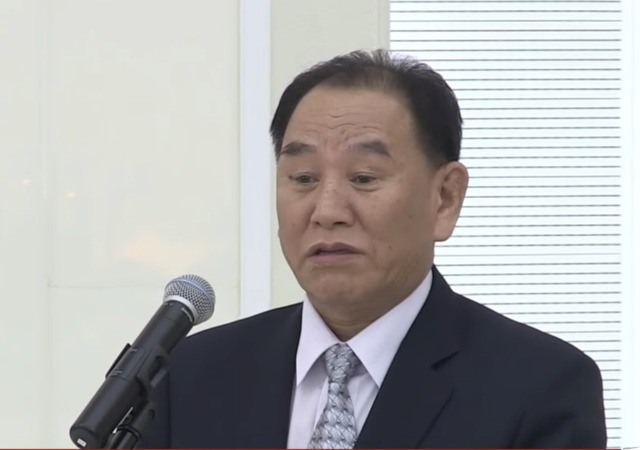 I recently urged readers to approach reports of a purge of North Korean officials associated with the Hanoi Summit with the U.S. that ended abruptly with skepticism.

Now it appears that everyone should take the cautious approach since the media reported Kim Jong-un sent one of the high ranking diplomats involved in the summit to a labor camp, but pictures show him enjoying himself at a North Korean theater….along with the Dear Leader.

High-ranking North Korean diplomat Kim Yong Chol was identified attending an art performance alongside leader Kim Jong Un in the country’s state media on Sunday — two days after one of South Korea’s biggest newspapers said he had been banished and sentenced to hard labor and his deputy executed.

If true, it would have been one of the most stunning stories to come out of North Korea in some time. Kim Yong Chol, in particular, sat in the White House across from US President Donald Trump for talks little more than a year ago.

Analysts have speculated that some of the North Korean diplomats charged with US negotiations were in hot water after the latest round of talks between the two countries ended abruptly in Hanoi without an agreement.

But an invitation to join Kim Jong Un in public would likely not be extended to someone who had fallen out of favor.

Many experts on North Korea suspect the regime pushed Kim Yong Chol to a back seat in negotiations with the United States. They were wary of claims that Kim Jong-un would have blamed him for the negotiation collapse. Furthermore, North Korea would face serious ramifications for future diplomacy if they had him “re-educated.”

Cheong Seong-Chang, an analyst at South Korea’s Sejong Institute, said Kim Yong Chol, who is also rumored to have health problems, wouldn’t have appeared in public this quickly if he was undergoing political re-education. Chang said it wouldn’t make sense for Kim Jong Un to execute Kim Hyok Chol when Kim Yong Chol, the more senior official, would be seen as more responsible for the failure in Hanoi.

“If Kim Jong Un sentences senior officials to hard labor, executes them, or puts them in political prison camps over the collapse of meetings, then no official would be willing to step up in external negotiations,” Chang said. “It’s unlikely that Kim would issue extreme punishment unless he’s giving up on the talks with the United States.”

The North Korean leader’s famous younger sister has also appeared in public for the first time in nearly two months, also contradicting rumors that the regime disciplined her in the wake of the Hanoi Summit failure.

Kim Yo-jong attended North Korea’s propaganda group gymnastics and artist performance called “The Land of the People” held in Pyongyang’s May Day Stadium on Monday, along with leader Kim, according to the Korean Central News Agency (KCNA).

It marked the first time that Kim Yo-jong has appeared in public since she was last seen in North Korean media during the Supreme People’s Assembly in April. Until then, she played the role of a personal secretary for the leader, and was seen holding an ashtray when he was having a cigarette break at a Chinese train station on his way to Vietnam for the summit with Trump.

That grinding noise you hear is the Media shifting gears to give this story about ten seconds of air time before switching to the next hair-on-fire story about something some single anonymous source claims happened that makes Trump look bad.

If it weren’t for Fake News, would the talking heads have anything to talk about at all?

All that picture tells me is that they all go to the same barber.

Maybe that’s who was purged?

Reading all those names makes me hungry for Chinese food.

The press is spreading disinformation? To what end? This requires a special counsel. We need to know if this is a sequel to night of the living diplomats.

When I first read of the executions, there was a paragraph at the end saying that previous claims had been proven false. I was like, “Don’t you… don’t you see that part at the bottom? That’s quite a disclaimer?” but I didn’t have the heart to say it out loud.

And now this happens.

Though in the meantime prominent journalists seem not to have particularly cared because it was one more way to trash Trump.

Never forget that when the American media writes anything about North Korea, it is a case of Communists investigating Communists. Absolutely nothing either side says should be taken at face value.