“Disclose, divest, or this movement will not rest.” 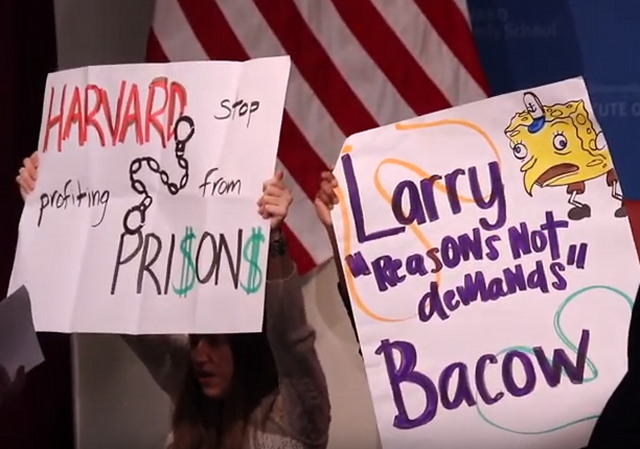 In April, Harvard President Lawrence Bacow should have spoken during a forum at Harvard’s Kennedy School. Before he could begin, student activists caused the event to end when they demanded that the school move its endowment away from prisons and fossil fuels.

The story has become big news now because the school decided not to punish those involved. Harvard did not even threaten to punish the students.

Left-wing activists shut down Harvard’s president. Harvard didn’t even threaten to punish them.

Harvard University went even further with anti-fossil fuel activists: It didn’t threaten to punish them at all.

Isa Flores-Jones of Divest Harvard told The Harvard Crimson that “none of” the group’s members were “directly” threatened with discipline, much less punished, for their shutdown of President Lawrence Bacow’s event with the Harvard Kennedy School in April.

The activists took over the stage before Bacow and Graduate School of Education Dean Bridget Terry Long could start talking. Kennedy School Dean Douglas Elmendorf feebly asked the protesters to move to the back of the venue, but they refused even that, according to the Crimson.

Bacow finally spoke up after “several minutes” of din to scold the protesters, but didn’t bother having them physically removed. Instead, the administrators deplatformed themselves and relocated the event to an inferior venue, rewarding the activists for their intolerance.

A report from The Harvard Crimson described the moment when Bacow tried to engage the protesters, who kept shouting.

A New Day for Divestment

Just moments after University President Lawrence S. Bacow took the stage in the John F. Kennedy Jr. Forum at the Harvard Kennedy School at an event in early April, student protesters emerged from the crowd with signs demanding divestment.

Six activists joined Bacow on the stage, sitting silently with their signs aloft as the Kennedy School’s dean implored them to leave the stage and allow the event to continue. Following his request, the students and roughly 20 counterparts scattered throughout the room began their signature chant: “Disclose, divest, or this movement will not rest.”

“You’re not being helpful to your cause and I suspect you’re also not gaining many friends or many allies in the audience by virtue in the way in which you choose to express your point of view,” Bacow said.

After a few minutes, he left the stage to continue the event in another room, while students remained chanting a while longer before leaving together and returning to Harvard Yard ecstatic.

The demonstration represented the first time that activists from Divest Harvard and the Harvard Prison Divestment Campaign had joined together publicly to advocate for their cause. Over the past several months, the two groups have ramped up their demands for the University to divest its nearly $40 billion endowment from companies related to the fossil fuel and prison industries.

These students have decided what is best for Harvard’s endowment, you see. They know better than the people paid to manage the funds.

You have to wonder why the students bother to waste their time pursuing an undergraduate degree. Shouldn’t they be advising investors on Wall Street?

This is endemic in higher education these days. It seems the administrations are afraid to discipline the children, and despite the age of these students, they are children, so it encourages more of this type behaviors.

This is the Democrats in large part, they act like children and throw temper tantrums, and nothing ever seems to come of it but more outrageous behavior. Look at the policies and things they stand for… pretty much everything except conservative thinking in anything… and that means they stand for nothing. They lack principles other than lip service to gain power for themselves so they go full totalitarian society where everything is allowed but limited free speech to only what they deem acceptable. And no guns.

At what point does it reach the breaking point where the so called adults in charge put their foot down and stop this? Probably when it’s far too late and all lay in ruins around us.

Higher education has changed dramatically in the last 2 decades. Young people attending college are no longer viewed as “students” who have gained admission and must maintain good academic standing and adhere to some basic set of governing principles in order to graduate. No, they are now viewed as “customers” who must be made happy and comfortable and free of anything that challenges their comfort and happiness.

The behavior seen on camp now is a direct result of this evolution in mindset and it isn’t going to get better any time soon.

That was already happening in the 90s. All that “business talk” about cutomers. And the kids, who seemed to think that since their parents had paid tuition, they were automatically entitled to getting a certain grade whether they showed up or not. I disappointed a lot of snowflakes back in the day.

You reap what you sow.
These kids were not told “no” as children, and they certainly won’t accept it now. Mom and Dad wanted to be their friend, and now the administration wants to be liked, too.
I would be mortified to say my child attended Harvard.
With all their ongoing various protests, are classes even held any longer?

Sorry. This is not about Harvard investments. It is to harm capitalism. The leaders of these brownshirts know the goal.

The dems want to launder taxpayer money by giving it to these POS universities via “forgiven” student loans.

These “activists” are just executing on one piece of the larger anti-USA plan. There is a big picture that makes these “irrational” incidents very logical.

Yeah, “this movement” will not rest even if their goals are met, because these are interim goals only.

Administrators are not weak; they are complicit.

I could understand it if it were confined to the Kennedy School or the Grad School of Education neither of which are serious academic institutions but when the President of Harvard himself wilts in the face of these spoiled children it is a very bad sign.

It’s about divesting in capitalism. All “investments” must be handled by “the government”. It’s time to divest in “higher education”. To paraphrase mayor diBozo, “There is plenty of money, it’s just in the wrong hands”.

BTW, it was reported last week that education and government pensions are the biggest investors in China tech companies. Where are they getting their tech again? Just sayin’.

Gotta love the height, depth, length and width of the void of thought involved in most of the histrionics.

The list is endless. Loved one protester years ago who held up a sign: “I don’t need fossil fuels. I ride the bus!” Uh huh… The short one, no doubt.

Not to mention the heavy-metal internal components of “renewable energy” wind turbines and solar panels (plus for the batteries for all those electric vehicles). The carbon footprints and ecological issues related to mining all of those heavy metals and the significant challenges of how to safely dispose of all of the used-up batteries and solar panels is never, ever discussed.

A degree from Harvard obviously isn’t what it used to be.

Yes, I’m in favor of arresting these… individuals on *criminal* charges of Creating a Public Nuisance. Fifty dollar fine and court costs at the destination, and by the time they get out of the courthouse, the speaker is done and back home.

This allows the question of “Have you ever been arrested” on the job application to be answered with the correct red flag for any future potential employer.

Progress through divestment from diverse carbon-based bags of mostly water.

It would be amusing to see Harvard respond by shutting off everything on campus that is powered (in whole or in part) by fossil fuels, and refuse delivery of all products delivered by fossil-fueled vehicles.

They could then invite these activists to secure replacement sources for heat, lights, IT infrastructure, etc. And when they’ve done that, they can go find (or create) some non-fossil-fueled transportation services.

So long as the commies control that stupendously gigantic endowment fund, they are not in hell. They are right where they want to be: in power.

Bacow? I thought it said Bacon and was getting all excited. Well, at least I now know that a Tillamook pepperjack bacon cheeseburger is on the menu for lunch. mmmmmmmmmm

Harvard has become another liberal mental institution. The alumni should raise Hell.

What will all these snowflakes do if all the companies against which they are protesting refuse to hire any student who does not sign a sworn statement that he or she was not one of the people who participated in this incident, and acknowledging that if the statement is false the signatory agrees to be discharged with cause and to have his or her name publicized as having committed fraud?

Harvard should give these “activists” exactly what they are demanding and completely eliminate everything on campus related to fossil fuel use. This would mean that cars should be banned on campus, heating and air conditioning in all campus buildings should be shut down, and no food or supplies should be allowed in any campus cafeteria, eatery, or school store, because these are all manufactured and transported to the school via fossil fuel dependent industries. All medicines and the school infirmary should be eliminated since they depend upon fossil fuels as well. Additionally, all potable water, laundry facilities, and shower facilities should be shut down. Likewise, toilets should also be closed because of the sanitation’s system dependence upon fossil fuels to function. Of course this is just the start to a comprehensive list, but if you want to appease those condemning fossil fuels, then one should be complete and all inclusive in their efforts. If Harvard did this, then these “activists” would likely receive more of an education in a very short time than if they spent four years there earning a degree.