In trying to give Warren some helpful campaign advice, Goldberg unwittingly laid a trap for the senator – and she fell right into it. 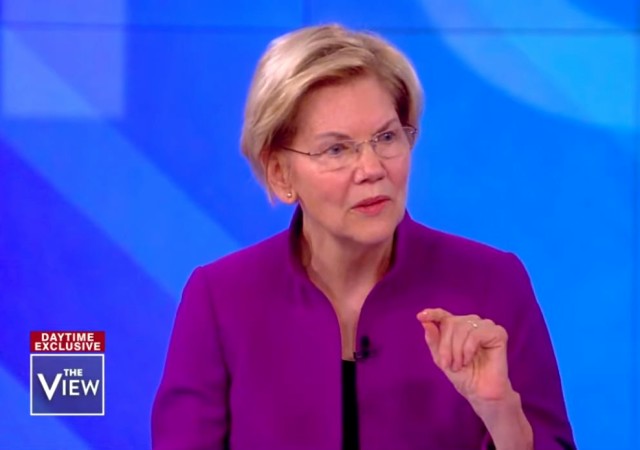 Earlier this month, I wrote about how the rationale for Sen. Elizabeth Warren’s Fox News town hall boycott was straight out of the Media Matters playbook – quite literally, in fact.

Warren, like the anti-Fox News liberals at Media Matters, accused Fox of being “a hate-for-profit racket that gives a megaphone to racists and conspiracists.” She also, like Media Matters, said that for Fox “it’s all about dragging in ad money — big ad money” at a critical time when, she alleged, “more & more advertisers pull out of their hate-filled space.”

When I wrote about this, I noted that the co-hosts on “The View” surprisingly took issue with her stance:

The View slams Elizabeth Warren for not going on Fox News:

Sunny Hostin: “It's very dismissive of so many Americans”

Meghan McCain: “You've got to go to places that are uncomfortable” pic.twitter.com/eIufzwC4mM

At the time, Warren wasn’t a guest on their show. But she was on Thursday, and she and co-host Meghan McCain had a back and forth exchange about why she refused to participate on Fox. Again, Warren repeated the Media Matters talking points:

“Here’s the deal about Fox News executives: They’re running a hate-for-profit scam,” Warren said, citing examples of recent coverage she said contained hateful rhetoric. “They make a lot of money off those town halls. Right now advertisers are getting really antsy about being with Fox on a regular basis.”

Warren added that she’s “just not going to give them a full hour to help raise money and help get [Fox News] credibility because they were willing to talk to me for an hour.”

Co-host Meghan McCain, a former Fox News contributor, noted that the network has a “history of having very successful town halls,” naming other 2020 Democratic hopefuls who have already participated in a town hall on the network or are scheduled to do so.

“I was surprised when you rejected it just because I know you are someone who will go to spaces where you’re not necessarily liked,” McCain said. “I think with all due respect its a little short sighted to not speak to the Fox audience.”

McCain later added that she felt Warren was “alienating an audience” with her decision.

Though the show’s liberal co-hosts largely agreed with Warren on other issues, two of them took issue with her Fox News boycott.

As she did two weeks ago, co-host Sunny Hostin disagreed with Warren’s position and asserted that Shepard Smith and Chris Wallace were “fair and balanced” journalists on Fox News who “are doing very balanced journalism there as well.”

Where things got interesting, however, was in what co-host Whoopi Goldberg said towards the end of the segment:

When Joy Behar responded approvingly [to Warren’s points], “Follow the money,” Whoopi Goldberg disagreed, suggesting TV executives on any network might be making money for questionable purposes: “I want to just say we should be very careful sometimes, because you scratch the surface wherever you go, and cockroaches run out everywhere.”

Watch video of this segment of the show below:

Goldberg’s point was the key one of that entire exchange. Think about it: Citing their supposed “hate for profit” business model, Warren says she’s against going on Fox News. Yet she’ll still appear on MSNBC, which is a 24-7 hatefest against conservatives and Republicans, and she’ll appear on CNN as well, which isn’t much better.

That Warren acknowledged Goldberg’s simple point about how you’ll find “cockroaches” no matter what network you appear on was also very revealing.

So what’s the real issue? Warren is afraid to go on Fox News. Even “fair and balanced” journalists like Smith and Wallace would take her to task and be tougher on her than Anderson Cooper or Don Lemon at CNN, or Rachel Maddow or Chris Matthews at MSNBC.

But let’s assume for purposes of discussion that she was right about Fox “running a hate-for-profit-scam.” Since when did Warren of all people decide for-profit scams were a bad thing?

She knows about “profit scams” all the way back to education in prestigious school while claiming “Indian heritage.”

Indeed. While Warren’s Native American scam didn’t have anything to do with hate, she most certainly did it for career advancement and profit.

In any event, Warren might be going traveling to cities and towns across America and talking to audiences in some areas that are typically hostile to liberalism, but appearing on a national network in front of millions of Fox viewers and a live Fox audience would be a far different ballgame. There would be no softball questions, no pillow-plumping.

Ultimately, she’s not doing this in order to take a principled stance. She’s boycotting Fox as a way to virtue signal and fundraise. And because she’s scared.

The people who run the DNC have already decided that the ONLY way to beat Trump is to run another old white guy against him in 2020. Apparently Ms. Warren either didn’t get or didn’t read the memo.

“There would be no softball questions, no pillow-plumping.”

No. Of course not. Chris Wallace would ravage Warren even worse than he ravaged Mayor Saint Pete as if he were Mitt Romney opining about Obama.

The new progressive playbook… label speech with which you disagree as “hate speech.”

notamemberofanyorganizedpolicital in reply to Massinsanity. | May 31, 2019 at 3:18 pm

So Warren and the gals on The View call enterprises that are run with the intention of making a profit “scams”? Would that include CBS? CNN? They all produce and air content that they hope will draw an audience; their success rates vary.

I’ll give Warren credit for being possibly the only candidate in the Dem herd who actually offers up policy ideas — stupid as most are — rather than the only point from the others is “remove Trump”.

notamemberofanyorganizedpolicital in reply to amatuerwrangler. | May 31, 2019 at 3:19 pm

What is unusual about Whoopi Goldberg doing something “unwittingly”?

To do something unwittingly you need to start with at least half a wit, and Whoopi doesn’t make the cut.

An oldie but still a goodie, “I would challenge you to a battle of wits, but I can see that you are unarmed”

Warren added that she’s “just not going to give them a full hour to help raise money and help get [Fox News] credibility because they were willing to talk to me for an hour.”
_________________

Hahahaha. The funniest thing about Warren’s rationalization for not appearing on Fox is her suggestion that talking to her gives Fox credibility. Warren is a total fraud. Her academic career, built on her lies about being Native and her shoddy bankruptcy work, is a joke, and she has been completely ineffectual as a senator. Warren has zero credibility to lend to Fox, or anybody else for that matter.

Put a mask on her, for heaven’s sake. The Native American imitator looks like a frump and dresses worse than Hillary, all the while being even less interesting than Hillary or peeling paint.

Princess Squatting Bull had a VERY uncomfortable interview with a black radio host,

He just kept coming back at her with her cultural appropriation, and even comparing her to Rachael Dolezal.

She’s the most nauseating, corrupt liar this side of that swine, hillary clinton.

Whoopi Goldberg disagreed, suggesting TV executives on any network might be making money for questionable purposes

Reminds me of Mencken’s definition of Puritanism as the haunting fear that someone, somewhere, may be happy.

Well put her on High, she is so much better than all of us!

Virtue as a weapon, interesting…

Warren is done. Does she understand that she did the one thing a progressive can never do, steal someone else’s victimhood for their own benefit?