The schism between the DNC establishment and the progressive base still hasn’t healed. 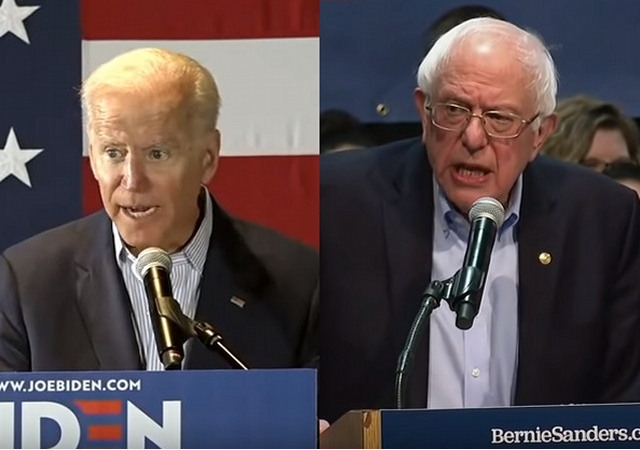 If you followed the Democratic primary process in 2016, you probably recall the schism that emerged between the establishment wing of the party, which backed Hillary Clinton, and the insurgent progressive wing that supported Bernie Sanders.

In 2020, we could witness a replay of this same scenario.

The Democratic National Convention is over a year away, and anything could change between now and then, but if you look at current polling, the two top contenders are Joe Biden and Bernie Sanders, and they’re already taking subtle jabs at each other.

Bernie Sanders and Joe Biden are very much on each other’s minds.

At his campaign rally in Philadelphia on Saturday, the former vice president went off script — twice — to deride a protester with a whistle.

“That must be Bernie or somebody,” Biden apparently said, raising eyebrows and drawing laughs…

Minutes later, with Biden talking about unity and governing amid more background whistling, he used the whistler as a punchline.

“You know, there’s serious work that has to be done,” Biden said, “but it’s not being done by a president who wakes up in the middle of the night and wages war on Twitter or like the guy on the whistle back there. Wonder whose campaign he’s with.”

In those two offhand remarks, Biden flashed a raw look at his view of the difference between himself and Sanders when it comes to governing – an adult seeking consensus or a kooky guy with a whistle.

Bernie has been taking shots at Biden, as well. The Associated Press reported, via Market Watch:

Bernie Sanders ramps up his attacks on Joe Biden

Bernie Sanders is quick to slam Joe Biden’s past support of free trade deals and the Iraq War. He is warning him against a “middle ground” approach to addressing climate change. His campaign sends fundraising appeals with a simple, foreboding subject line: “Joe Biden .”

In his nearly three weeks as a presidential candidate , Biden has become Sanders’ favorite foil.

No one seeking the 2020 Democratic presidential nomination has been as aggressive as the Vermont senator in highlighting episodes from the former vice president’s past to sow skepticism in the party’s progressive base.

The strategy is reminiscent of Sanders’ approach to the 2016 Democratic primary, when he relentlessly slammed Hillary Clinton as an establishment pawn.

Some people on the left seem to think the Democrats are going to save all of their ire for Trump, but that’s just not going to work, especially as their primary becomes more competitive.

Bernie supporters believe the DNC betrayed them in 2016, and they’re right. If a similar situation plays out in 2020, and they feel the DNC rigged the process in Biden’s favor, things could get ugly.

For some perspective on this issue, watch Joe Biden talking to George Stephanopoulos at the 2016 Democratic convention and insisting that Bernie supporters will come around in the end and vote for Hillary.

What’s that old saying about people who refuse to learn from history?

Assuming neither Biden nor Bernie pulls out to a large lead (and than no other candidate makes a move), the Ds will end up with gridlock. The logical solution is to renominate Hillary by popular acclaim. Three reasons this move would make sense: (1) Hillary has her finger on the pulse of America — a bond with the common person, (2) Without any Russian interference, Hillary would win in a landslide, and (3) The country owes Hillary after she had the 2016 election literally stolen from her.

You neglected to recount the overwhelming love and adoration the electorate has for her, too.

An excellent point (4). Hillary is like EVERYONE’s favorite grandma, down to even the slight smell of urine. I bet she would have Cookie Tuesdays in the White House when she personally baked cookies for all the tour visitors.

Don’t forget she also carries hot sauce in her purse just in case she has the chance to sit down to some soul food with any of the black folk that she loves so much.

It looks like Statler and Waldorf, the two old hecklers on Sesame Street, are now arguing between themselves. Maybe it will be easy being orange.

Bernie supporters believe the DNC betrayed them in 2016, and they’re right.

Foul though the DNC may be, it’s not obvious that foiling an attempt by a non-Democrat to hijack the nomination was a “betrayal”.