Stephanie Carter says “still shot” of Biden touching her is “misleading,” but we have the creepy video

Stephanie Carter says “still shot” of Biden touching her is “misleading,” but we have the creepy video

Carter throws Biden a campaign lifeline, but why? Even in an age where we are supposed to “Believe All Women,” we also should believe our eyes. 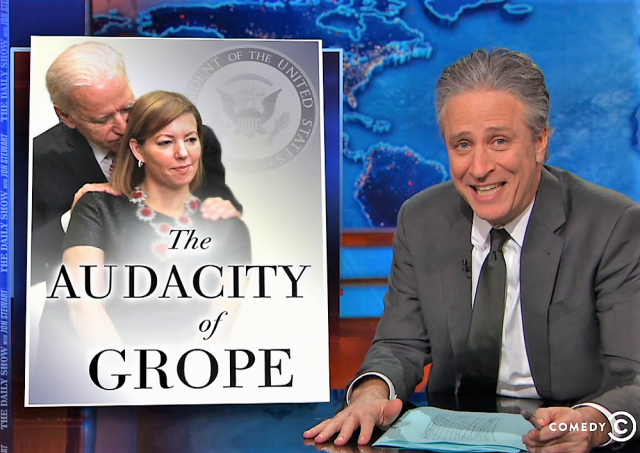 Joe Biden’s creepy habit of touching and nuzzling women in public in front of the cameras has been the focus of mockery and discussion for several years.

The “Creepy Uncle Joe” narrative is back in the news because liberal Democrat activist and former Nevada Lt. Gov. candidate Lucy Flores has stepped forward with an accusation that Biden did something similar to her in 2014 in private, Joe Biden has a #MeToo problem – Liberal activist claims 2014 non-consensual “big slow kiss”:

As I was taking deep breaths and preparing myself to make my case to the crowd, I felt two hands on my shoulders. I froze. “Why is the vice-president of the United States touching me?”

I felt him get closer to me from behind. He leaned further in and inhaled my hair. I was mortified. I thought to myself, “I didn’t wash my hair today and the vice-president of the United States is smelling it. And also, what in the actual fuck? Why is the vice-president of the United States smelling my hair?” He proceeded to plant a big slow kiss on the back of my head.

Biden issued a non-denial denial, in which he does not categorically deny the conduct, only that he doesn’t recall it and never intended to be creepy towards women.

Former Vice President Joe Biden responded for the first time on Sunday to allegations that he made a Nevada politician feel “uneasy” in 2014 when he kissed her on the back of her head, saying that he never believed he acted inappropriately.

“In my many years on the campaign trail and in public life, I have offered countless handshakes, hugs, expressions of affection, support and comfort,” Biden said in a statement. “And not once – never – did I believe I acted inappropriately. If it is suggested I did so, I will listen respectfully. But it was never my intention.” ….

In his statement on Sunday, Biden said, “I may not recall these moments the same way, and I may be surprised at what I hear. But we have arrived at an important time when women feel they can and should relate their experiences, and men should pay attention. And I will.”

Flores is sticking to her story and pointing out Biden’s history of such conduct. It puts Biden at risk of becoming Al Franken:

How can Democrats back Biden as a presidential candidate when they jettisoned Al Franken as a Senator?

One such incident of Biden touching and nuzzling women was his conduct towards Stephanie Carter, the wife of Ashton Carter, during his swearing in as Defense Secretary under Obama on February 17, 2015.

Everyone saw what they saw, and even outlets like the normally staid Roll Call found it creepy, producing a video with the critical moments in slow-motion:

The Biden-Carter incident was featured and mocked even in the liberal press, and was featured in this Jon Stewart segment, The Audacity of Grope:

On March 22, 2018, a year before Flores went public, WaPo posted a video featuring the iconic image of Biden nuzzling Stephanie Carter, as part of a broader examination of Biden’s “mixed legacy on sexual misconduct”:

There have been numerous still images and screenshot images of the incident that spread. Here is one screenshot we took, but there are numerous iterations on it: 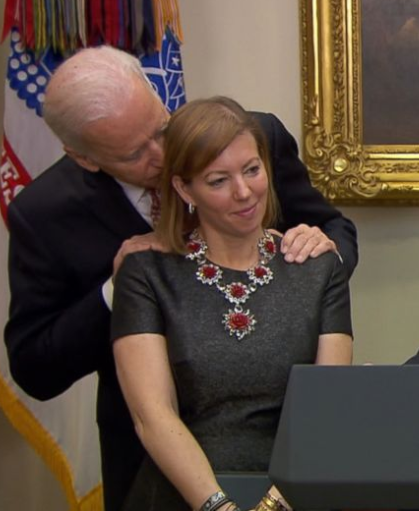 That Biden’s hands on approach to women, and Stephanie Carter in particular, was a political issue for him has not been a secret for at least several years.

But now, in the wake of the Lucy Flores allegations and the possibility it may upset Biden’s presidential campaign plans, Stephanie Carter has published a post at Medium asserting the image of her was take out of context and is misleadingjj,

Stephanie Carter argues that a still image of Biden touching her has been taken out of context. We don’t know which still image specifically she’s referring to, but it probably is the one featured in the WaPo video: 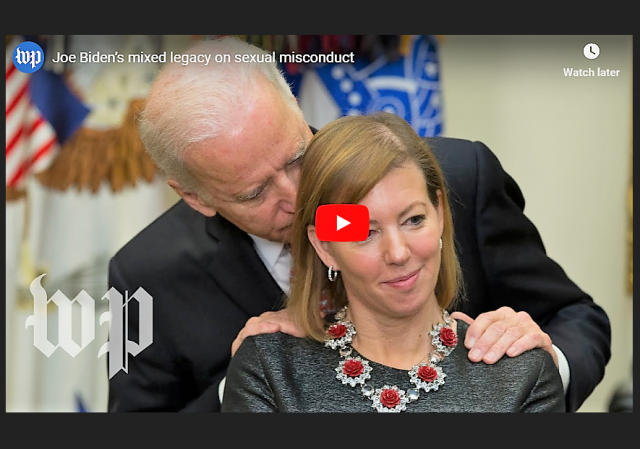 Here’s an excerpt from Stephanie Carter’s post, The #MeToo Story That Wasn’t Me (emphasis in original)

It happened again two weeks ago. I was at an industry conference comprised of my female peers — what would be my last time there as I had announced my intent to start my own company — when a friend ran up to me joyously stating she had “seen me”. I assumed she was referring to a recent piece in an industry newsletter about my retirement from my firm and transition to entrepreneurship, but she quickly let me know that it was again that picture which Jimmy Fallon had shown the night before.

Last night, I received a text from a friend letting me know that picture was once again all over Twitter in connection to Lucy Flores’ personal account of a 2014 encounter with Joe Biden. Let me state upfront that I don’t know her, but I absolutely support her right to speak her truth and she should be, like all women, believed. But her story is not mine. The Joe Biden in my picture is a close friend helping someone get through a big day, for which I will always be grateful. So, as the sole owner of my story, it is high time that I reclaim it — from strangers, Twitter, the pundits and the late-night hosts….

Upon our arrival at the Pentagon, I had slipped and fell on some ice — which a few journalists were nice enough to tweet about. Later, we went to the White House for the swearing in and I was feeling self-conscious and tentative (not a normal state for those who know me) about the fall — and perhaps about how much our life might change. As we walked in the room, reporters were staged and a young woman from Huffington Post shouted to me to ask if I was doing all right — I was somewhat thrown (did I not look all right?) but quickly remembered news of my fall on the ice had traveled. By the time then-Vice President Biden had arrived, he could sense I was uncharacteristically nervous- and quickly gave me a hug. After the swearing in, as Ash was giving remarks, he leaned in to tell me “thank you for letting him do this” and kept his hands on my shoulders as a means of offering his support. But a still shot taken from a video — misleadingly extracted from what was a longer moment between close friends — sent out in a snarky tweet — came to be the lasting image of that day….

I thought it would all blow over if I didn’t dignify it with a response. But clearly that was wishful thinking.

The Stephanie Carter post got Biden the exculpatory headlines he so desperately needed as other Democrat candidates pile on him: 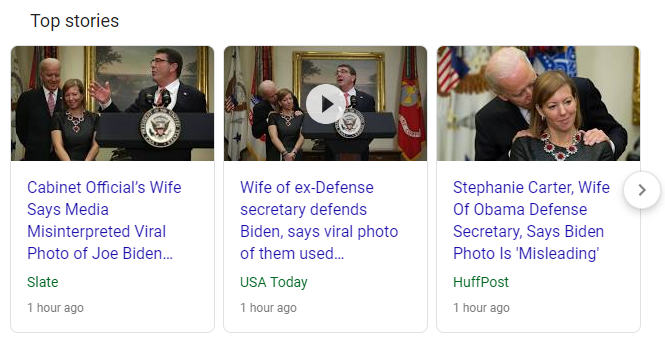 Why now? Why only after Lucy Flores stepped forward and Biden’s campaign was at risk of being Al-Frankened?

If a Biden strategist had devised a distraction to exculpate years of touching and feelings directed towards numerous women, how better than to have one of his victims come forward to say ‘you didn’t really see what you saw’ knowing it would shift the news cycle from Biden’s conduct? It was a valuable life-line thrown to Biden.

What’s misleading is Stephanie Carter’s claim, repeated in the media, that the issue is a single still shot “ misleadingly extracted from what was a longer moment between close friends .” Seriously, Stephanie, we saw the video. The controversy isn’t over a misleading screenshot or still image. We saw what he did and the expression on your face.

Even in an age where we are supposed to “Believe All Women,” we also should believe our eyes.

The Stephanie Carter statement sure is looking like part of a Biden campaign strategy.

Here is a new statement issued by Biden’s spokesman about the “cottage of lies” pushed by “right wing trolls”: 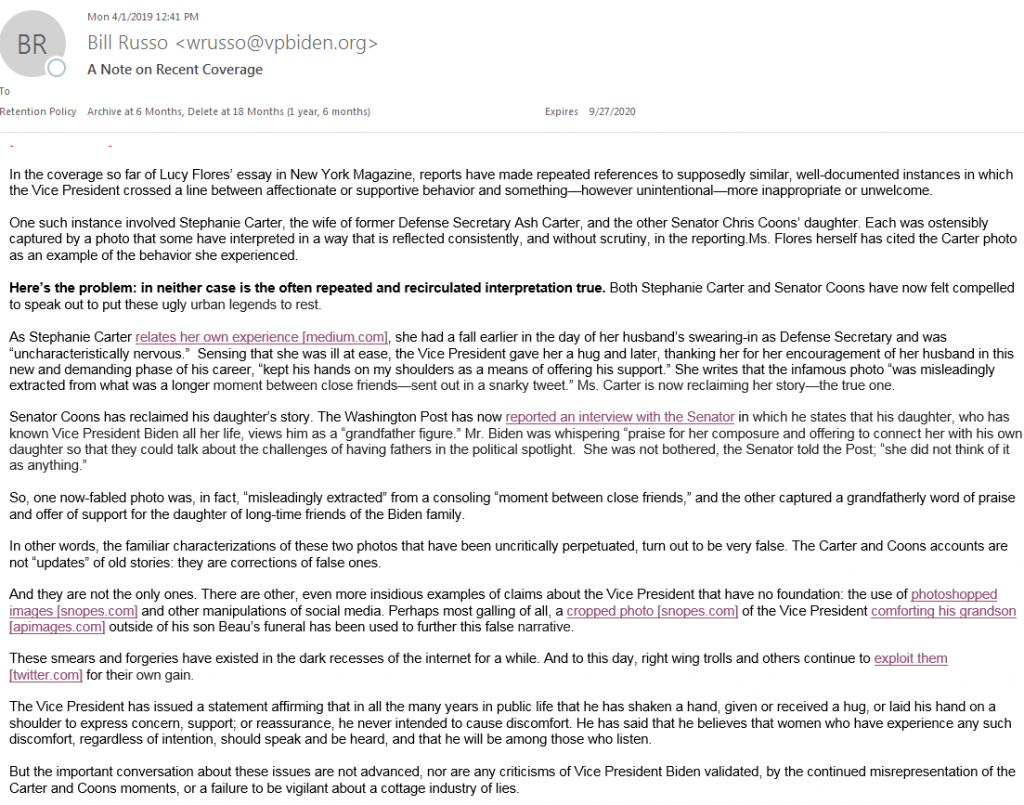 I remember when Biden made noise he might run against Hillary in the last primary, I had an afternoon to kill and spent it binge-watching the creepy Joe videos that I suspect were posted by Hillary’s campaign.

Interestingly, the videos I recall were far worse than the videos that I could find at a later date after Hillary secured the nomination.

I don’t know if they somehow edited out the parts that were BAD or if they somehow managed to erase the worst videos from the internet, but but they were not nearly as bad as the ones I had first seen.

We should be thankful that Biden is fighting this.

This is nothing new. Democrats have known about it for years.

Literally years ago somebody went through PUBLIC footage and made an hour-long supercut of Joe Biden being creepy. Hands in awkward places, a LOT of hair smelling, and just general creeper behavior.

Just like people like Weinstein, they don’t care as long as he’s useful to the cause. They all know about him. They make JOKES about him.

Here’s one of the videos, covering his behavior specifically with CHILDREN. It was posted relatively recently. In November.

Biden is like a crotch-sniffing dog a friend of mine once had. The main difference is that Biden only sniffs females.

Stephanie Carter will only be the beginning if Biden runs. Political warriors will compare his misdemeanors to Trump’s capital offenses (in the minds of the left) and dare anyone to say otherwise. This is not lethal to Biden’s candidacy, not at all. Otherwise, Biden would not be towering over the Democratic field in polls.

The trouble with Biden is not the grown women. These Democrats could have come out and complained…of they didn’t want something from VP Biden.

The trouble for Biden comes with the video of him getting handsy with pre-teens. While I thought this was widely known, my husband was shocked to see the Creepy Uncle Joe compilation, which I found after following Kellyanne Conway’s suggestion.

Those videos are hard for me to watch actually.

Thanks Leslie. I had seen this video early last year but hadn’t been able to find it when a friend who is a Biden supporter recently mentioned that he had never heard of the Creepy Uncle Joe problem. I will be sharing this now.

I agree with rdmdawg… very hard to watch. I had to turn away at a couple of the most awkward/disgusting moments.

Dems are pushing this Creepy Uncle Biden story to test the waters for a possible presidential run. If he can shake this off, that will signal the donors and we’ll get an official Biden 2020 notification.

I have no evidence that this is the strategy, I’m just noting the timeline of the story.

1. Does Carter believe Flores when the latter says she was pawed by Biden? Carter’s #BelieveAllWomen statement seems to suggest that.
2. If Carter believes Flores, the does she think Biden should NOT run for President?

The answers would be … interesting. Which is who no one in the MSM/DNC axis will ask.

There has been talk that creepin’ joe also liked to skinny dip in his pool in front of female Secret Service agents. Something is seriously wrong with joe biden, always has been. He’s the front runner, but looks like the left doesn’t want an old white guy this time around.

Pretty sure most know he’s a molester. About the 1:25 mark Jeff Sessions swats away Biden’s hands when he goes for his granddaughter.