“Of eight factors, most people, 67 percent, believe high school grades should be the most important.”

A new survey conducted by the Pew Research Center about the importance of race in higher education has some surprising findings. A significant majority of Americans no longer see this as a necessary consideration in admissions.

As the debate over college admissions policies reignites, a new Pew Research Center survey finds that most Americans (73%) say colleges and universities should not consider race or ethnicity when making decisions about student admissions. Just 7% say race should be a major factor in college admissions, while 19% say it should be a minor factor.

The issue emerged again earlier this month when a federal judge heard closing arguments in the high-profile lawsuit against Harvard University that could eventually reach the U.S. Supreme Court and influence the future of affirmative action in higher education.

The breakdown across racial groups is particularly fascinating:

While majorities across racial and ethnic groups agree that race should not be a factor in college admissions, white adults are particularly likely to hold this view: 78% say this, compared with 65% of Hispanics, 62% of blacks and 59% of Asians (the Asian sample includes only those who speak English).

See the graphic below, via Pew: 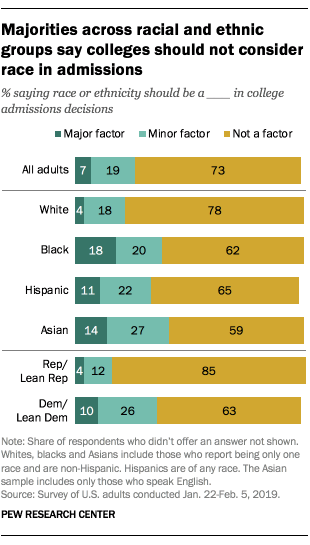 Of eight factors, most people, 67 percent, believe high school grades should be the most important.

Is it time for colleges and universities to base admissions purely on merit?

Quick! Pass this along to Harvard and UNC-CH!

A problem I see is, 27% DO see race as a factor to consider for admissions.

And 0% of college admissions offices think the opinion of the riff-raff outside the ivory tower is worth the breath it’s spoken on.

But then again, sending the brightest students to be brainwashed might not be a good move. Better to clean up higher education first.

A task right up there in difficulty with with Hercules Fifth task of cleaning out the Augean stables.

Not just college, everything should be race neutral, in all walks of life, people should be judged based on their capabilities and how well they have applied them.

Having the necessary IQ is important, but that needs to be coupled with ambition, work and education ethics, and empathy driven morality. To work well with other people, one needs the ability to consider all actions in light of how they would feel if they were on the receiving end of such.

Development of law was in large part to deal with humans who lack the ability to innately understand what is right and wrong(probably about 30%). For them it is about rules and punishment, and since they lack that internal compass, they feel it is alright to scheme to do things which are wrong.

We have all had to work with those kinds of people.

I have to say I’m surprised at the Asian representation claiming the lowest level of “Should not be a factor” @ 59%. Eliminating racial preference in favor of academic performance would seem to be a natural position for many of those of Asian descent.

Some of them benefit from the “positive’ stereotypes and want those to continue while dispelling negatives.

These are especially strong among Asian women activists, who are also unsurprisingly feminist. Have your cake and eat it, too comes to mind.

Harvard seems to be doing the same

But… How confident are we that high school grades are a valid predictor of learning-to-date and/or collegiate success. Maybe timely college graduation and good HS grades should be examined for correlation first. Many schools these days give points toward GPA for outside activities and volunteering which yields “scholars” who boast a “4.5” and higher, on a 4-point scale.

This. SAT or other test scores are a better criterion than inflated grades.

Definitely, but there’s a huge social push against tests like SATs because…surprise…they might actually tell you that you didn’t make the cut in a normed, standardized and highly effective method.

Not race, not sex, not gender, etc. A progressive legacy of diversity is difficult to defeat. Color is a low information attribute, which has limited significance, and is certainly a poor criteria to decide who is affirmatively denied equal opportunity for education.

I don’t see a mention of “nationality” in the list of factors.

If admissions are race-, ethnicity-, and nationality-neutral, in no time at all our colleges will be filled to capacity with Chinese Borg.

Whether that’s “good” or “bad” is another question. But whether or not it will happen is hardly in doubt.

There are a lot of Chinese, they know where the good schools are (and they’re not in China), they have plenty of money to finance the campaign of conquest, and they’re willing to work for it.

For better or worse, the only thing holding back the tsunami is racist/ethnicist/nationalist college admissions policy.

then maybe we should stop catering to the lowest common denominators in a classroom in the name of sparing feelings.

Definitely, in all walks of life.

The takaway from this and other recent polls is this: people are tending to be ‘traditional Americans’ – but still, people follow alphas. Being the GOP is a beta political party, it has no followers, except international business interests. The people need leadership, which the GOP does not provide.

Purge the GOP of the rats infesting it, replace them with real men and woman, and people will start following Trump in much greater numbers.

I have serious reservations about rater either party can be salvaged. The best path may be electing independents. Traditional parties may well only change their ways after being sidelined.