“Media really needs to stop covering the white, cis-gendered, heterosexual man in America as if it is an underrepresented group.” 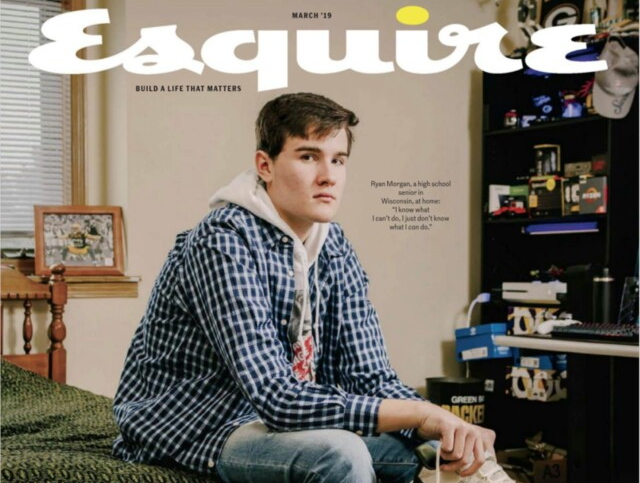 The men’s magazine Esquire has published a story about an average white teenage boy from Wisconsin with moderately conservative views and moderate support for President Trump. The left has responded exactly as you would assume they would. They’re outraged.

The piece was written by Jennifer Percy. It’s a long but thoughtful and fair story, which doesn’t reveal anything particularly controversial. The progressive rage directed at it seems to be based solely on the choice of subject matter.

A white teen boy on the cover during Black History Month is one of the chief complaints, despite the fact that this story is part of Esquire‘s March issue.

Here’s a sampling via Esquire:

The Life of an American Boy at 17

Ryan Morgan is seventeen and happy to be a guy. To be a girl would mean he’d have to deal with a lot more drama. He’d likely have to deal with mean girls. And he could end up a mom, which he doesn’t ever want, because being a mom is hard. Probably the hardest job in the world. Also, he might not think football was as interesting. He isn’t sure what would be interesting, but if it isn’t football, then he isn’t interested. Other than that, he doesn’t think there are too many reasons it would be better to be a guy than a girl—unless you’re from the Middle East or maybe the inner city.

Ryan lives in West Bend, Wisconsin, a town of just over thirty thousand outside Milwaukee. He has a kid face, with big brown eyes. His mom, Tori, usually cuts his hair, which he sometimes styles into a side sweep. He’s well-dressed and has a sizable sneaker collection. At six five, he’s taller than most of his classmates; taller than his dad, Owen; tall enough to get into a bar to watch football without getting carded.

From there, it tells the story of an altercation Ryan had with a female classmate who physically assaulted him and the lessons learned from the incident. We eventually come to politics:

“Last year was really bad,” he says. “I couldn’t say anything without pissing someone off.” He says it started around the time of the presidential election—the liberal students became enraged and the conservative students emboldened. “Lots of drama over politics,” he says. “It ruined friendships and changed social groups. People were making friends based on their politics more than anything.”

Kids started advertising their beliefs by hanging flags and posters on their lockers. They wore T-shirts that promoted Hillary for president, or Trump for president, or LGBT rights, or feminism, or Black Lives Matter. The most popular opinion at West Bend seemed to be anti-Trump. Ryan, raised in Republican households, was surprised by the vitriol. “Everyone hates me because I support Trump?” he says. “I couldn’t debate anyone without being shut down and called names. Like, what did I do wrong?”

It’s worth your time to read the whole thing.

Here are some examples of the left’s reaction:

Because you know what we don’t discuss nearly enough? The white male experience. ????????‍♀️ pic.twitter.com/HTbq4wK1TJ

Imagine this same ‘American Boy’ headline with someone who looked like Trayvon talking about what it’s like to have your mother sit you down to tell you how to stay alive in your own city during Black History Month.
Just imagine.
Shame on you, @esquire. pic.twitter.com/aIlhGzmGph

I get what Esquire was going for here but ooooooooooooh boy talk about failing to read the room pic.twitter.com/OUzy3GJdI1

Happy Black History Month, everybody. On this day of Our Lord Feb 12, 2019: pic.twitter.com/dR70iTvvoh

What kind of garbage is this @esquire? Media really needs to stop covering the white, cis-gendered, heterosexual man in America as if it is an underrepresented group. It is fucking dangerous pic.twitter.com/x9fDGMJC33

The author has even been forced to disclose that she did not choose the cover photo.

Esquire magazine dropped the cover story for its March issue on Tuesday, and many people expressed their frustration with the 17-year-old boy profiled in the article. The author of the cover story, Jennifer Percy, says the presentation for her feature story was “misleading.”

“The Life of an American Boy at 17” follows Ryan Morgan and, according to the cover, “what it’s like to grow up white, middle class, and male in the era of social media, school shootings, toxic masculinity, #MeToo, and a divided country.”

In an email to CBS News, Percy wrote the “article shows how much work we still have to do to educate boys about inherited white male privilege. It also shows that the teenage years are an ideal time to make change.”

“I did not approve the cover image or cover text and found the presentation misleading,” Percy wrote.

Michael Brendan Dougherty of National Review has written an excellent response to the outrage:

The Society of Tattletales

Esquire magazine launched a series of reported essays this morning with an article titled “The Life of an American Boy at 17.” It featured a tall, handsome, but not particularly dynamic white kid from Wisconsin who thinks he’s likely to end up working at a “water plant.” Thousands of people who don’t subscribe to Esquire, or normally read Esquire, or fit in with Esquire’s target demographic are furious about the choice of subject. Or at least they are pretending to be. Our future water-plant worker is just too unbearably privileged for the leading minds of New York media. He shouldn’t be represented this way. For reasons that aren’t altogether clear…

Some of the excuses for the outrage are made up. How many women were in the decision-making process for this article? (The article’s author is a woman.) “Why are you centering whiteness? Are you defining American as white and male?” (It’s only the first in a series looking at white, black, and LGBTQ teen subjects). “Why did Esquire do this in February, which is Black History Month?” (It’s the March cover subject). But March is Women’s History Month! Although my favorite complaint is when people say, “Who thought this was a good idea?” Why isn’t someone an acceptable answer?

Reading the Esquire piece and seeing the left’s reaction to it got me thinking. Maybe a failure to campaign in Wisconsin isn’t the only reason Hillary lost that state in 2016.

I’m pleased to see an article about a white male. As for black history month: I don’t care.

I agree with Morgan Freeman on Black History Month

FREEMAN: I don’t either. I don’t want a Black History Month. Black history is American history.

WALLACE: How are we going to get rid of racism until …?

notamemberofanyorganizedpolicital in reply to RedEchos. | February 13, 2019 at 11:58 pm

I’ll never get over all those Democrat Women dressing in
“pure” white to celebrate the KKK this month at our SOTU…..

Would you ever believe it?

And in “Back History Month” too!

Maybe if it was changed to “Black Crime History Month”, it would have relevance. It would certainly get more attention!

I think we should make half of the black history month into white history month. Boy, that would be fun to watch.

So if I decide March is cupcake month, nobody is allowed to write about biscotti for the entire month?!

Milhouse: So if I decide March is cupcake …

I had my annual dose of ponchkes on Chanukah.

Who made it Black History month and do I get a paid day off for it? Holidays I don’t get paid for I don’t care about.

“…someone who looked like Trayvon talking about what it’s like to have your mother sit you down to tell you how to stay alive in your own city during Black History Month.”

I bet that Trayvon’s pseudo parents taught him that he was entitled to whatever he wanted. They failed Trayvon in so many ways.

In the past, magazines and other periodicals were written to address the desires and needs of their subscribers. Today, however, the SJW tribe demands that everything published regurgitate their leftist talking points, and in many cases, that’s exactly what (and often the only thing) printed. It’s no wonder that the serial publishing trade is quickly sinking into the sunset

Why does this remind me of the National Lampoon cover of a Housewife, a dog, and a baby, which is what Hearst said were the three things guaranteed to sell a magazine.

Looking at those covers tells me that it would need to a be a brave newsstand that would display them.

I am waiting for Black Math month or Black Quantum Physics month.

You have a long wait. “Turn the TV off and Have Some Reading Material in the House” Month has a higher priority.

“In the past, magazines and other periodicals were written to address the desires and needs of their subscribers. Today, however, the SJW tribe demands that everything published regurgitate their leftist talking points”

Also in the past: books sometimes got banned, yet nothing quite stimulated the sales of a book quite as much as a proud “Banned in Boston!” banner prominently displayed on it.

Esquire, arguably one of the whitest magazines in publication history, is getting flak for writing about white people.

The first thing that hit me was the issue month, which is not black history month.

Leftists: we’re the smart ones!

The date on the cover is not the month it’s issued, it’s the month when it expires. So the “March” issue is the one that is on sale throughout February.

Wisdom and right living doesn’t have a skin color.

A white teen boy on the cover during Black History Month is one of the chief complaints, despite the fact that this story is part of Esquire‘s March issue.

This is not a valid criticism. The date on a magazine’s cover is the date when it is to be removed from the shelves. So the “March” issue is the issue that is on the newsstands throughout February, and will be replaced on March 1.

Not always. Some do it to look more current after they have been on the shelves for several weeks.

Regardless, February isn’t owned by anyone and the fact that the magazine says “March” on it is a valid if sarcastic takedown of the shame shame twitter trolls.

I thought “Black History Month” was a time to remember dark times in our history that have been overcome. My bad.

Time to remember the dark truth that Africans sold other Africans as slaves, and they continue to enslave each other to this day. Perhaps American blacks should seek damages from Africa?

“Trayvon, you need to listen to me son: DO NOT COMMIT ATTEMPTED MURDER! That s#!T will get you killed.”