Told New Yorkers last fall that she would serve her full term if reelected. 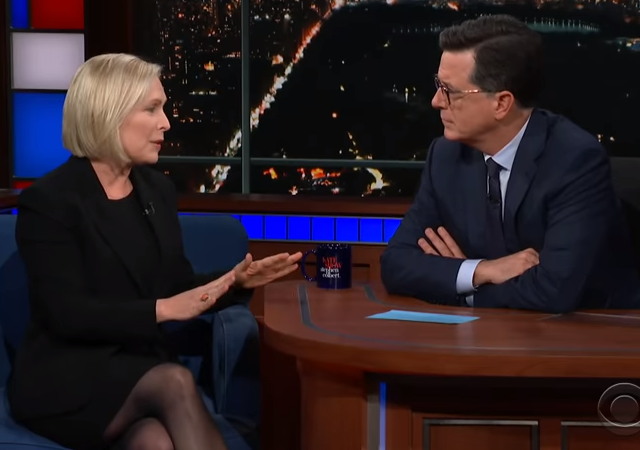 Senator Kirsten Gillibrand (D-NY) is reportedly going to announce her plans to run for president tonight on the Late Show with Stephen Colbert. Her team probably chose the Colbert show because it has become a nightly celebration of Trump Derangement Syndrome.

New York Sen. Kirsten Gillibrand will become the next Democrat to enter the 2020 presidential fray, according to CBS News, which reported Monday that she will announce her formation of an exploratory committee Tuesday during an appearance on the network’s “The Late Show with Stephen Colbert.”

The Associated Press, citing people familiar with Gillibrand’s plans, also reported that she would launch a White House bid “within days.” Representatives for the senator had no immediate comment when contacted by Fox News.

Gillibrand – who heads to the early caucus state of Iowa this weekend – would become the fifth Democrat, and the second senator, to officially jump into a presidential primary that could feature dozens of candidates before all is said and done…

While Gillibrand’s prominence as a face of her party has grown, she faces a tough battle to capture the attention of Democratic voters in a crowded field that’s expected to include multiple women. Several of her potential rivals have spent more time in critical primary states while Gillibrand has visited just one — New Hampshire — in October to stump for the Democratic candidate for governor.

Gillibrand has some major obstacles to overcome in this primary. She threw the Clintons under the bus the minute they were no longer useful to her, many people on the left blame her for the ousting of Al Franken, and finally, she is already breaking a promise she made during last fall’s election.

During a debate just a few months ago, Gillibrand said if reelected, she would serve her full term. Here’s the exchange via the Washington Examiner:

Moderator: “Can you tell New Yorkers, who plan to vote for you on Nov. 6, that you will, if re-elected, serve out your six-year Senate term?”

Moderator: “Just want to make this clear, you’re saying that you will not get out of the race and you will not run for president? You will serve your six years?”

Gillibrand: “I will serve my six-year term.”

Do you think Colbert will ask her about that?

She will serve out her six year term because she has no chance of winning the Democratic nomination.

I only wish I had more upvotes for this. Pro Tip: Kristen is not well liked among Democrats because she is a back stabbing b____. She will have no traction with delegates and voters and other candidates would not want her as a running mate or in their administrations.

a general comment –
when a sitting politician runs for a different office,
they should be required to give up their current job.

I agree mainly because they devote almost all their time to running for the different office and therefore are not doing the job they were elected to do. While in some cases that is a plus, it is still theft because they are being paid to perform their job, not run for new office.

“Her team probably chose the Colbert show because it has become a nightly celebration of Trump Derangement Syndrome.”

Close but not quite. She chose Colbert because she thinks he is representative of the culture, a thought-leader and influencer who will give her direct access to the hearts and minds of people who care about the future of the country.

And because it’s way cheaper than a press conference.

Does anyone even watch his show? His “comedy” is about as lame as it gets.

I find it incredible (but, not surprising) how these Dumb-o-crat apparatchiks seeking the presidency always announce their candidacies on an utterly inane, irrelevant, self-reverential Leftist TV show, where the host and apparatchik can engage in a nauseating mutual ego-stroking exercise.

Not that I care for Gillibrand, but, why not announce a candidacy at, say, a shut-down factory, or, a community center in a crime-ridden ghetto — you know, a setting that might conceivably be linked to the apparatchik’s underlying rationale for seeking higher office. The vapidity and superfluousness of Gillibrand’s candidacy is underscored by her appearance with the nauseatingly snarky and smug Colbert.

Trump should be really scared now. First Pocahontas, then Julian Castro, some woman named Gabbard that nobody has ever heard of and now Gillibrand!! Please don’t tell me Beto is going to run. Trump’s imminent political death is now certain!

Yes, let’s have every single Democrat in Congress run in 2020. What a massive display of “the emperor has no clothes” that will be.

This is a good thing. They will face much more scrutiny and be exposed by each other for the lame candidates that they are.

A portrait in ugliness. Rank and file liberal deception, turpitude and popular decadence.

Adirondack Barbie joins Squatting Heifer and the Frito Bandito for relevance in advance of the 2020 primary season. Can’t wait to see it when the field of 20 start bitch slapping one another over things.

She knows her target demographic. The low information voter. She’ll follow up with Bill Maher, right?

Well, it is a comedy show after all! Maybe this her way of breaking into to standup.

Would it be impolite to inquire as to the financial issues surrounding the formation of the exploratory committee? Does it mean that she can begin taking donations? And if so, what kind of line is drawn between those donations and what may be (I have no idea one way or the other as to their existence) debt incurred and not yet settled from the recent senatorial campaign?