Unemployment ticked up only because of higher participation rate in the labor force. 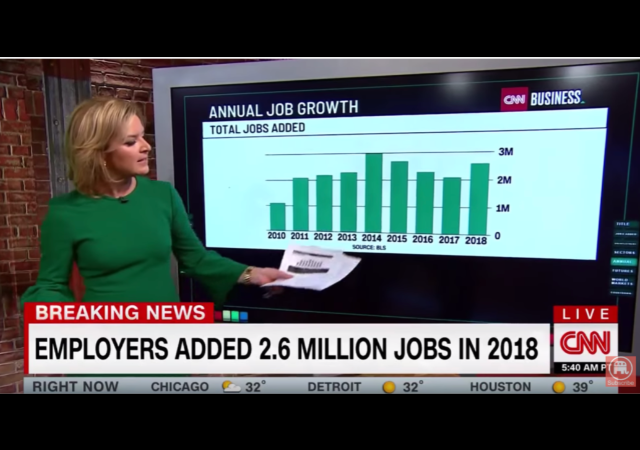 Economists predicted we’d only see around 176,000 new jobs in December 2018, but the jobs report showed employers added 312,000 jobs instead.

Unemployment rate went from 3.7% to 3.9%, but that’s because labor force participation increased to 63.1%:

Helping to explain the uptick in joblessness, the labor force participation rate rose to 63.1%, matching its highest level since 2014, from 62.9% in November. Participation has been low by historical standards in recent years as the U.S. population ages, but economists say rising wages and good job prospects may be pulling workers back into the labor force.

A broader measure of unemployment, which includes discouraged workers and those working part-time for economic reasons, remained stable at 7.6% in December.

The report also showed that those in their prime have returned to work:

But among workers ages 25 to 54, when education and retirement keep fewer people out of the labor force, participation rates are much higher. These rates are now back to their highest readings since 2008. 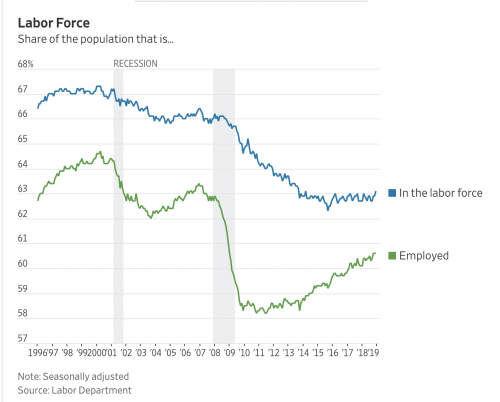 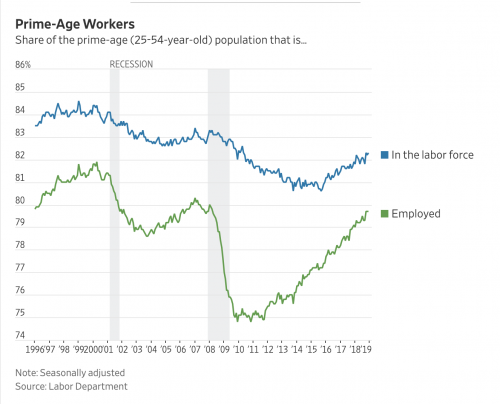 However, the numbers show that unemployment among those without a high school diploma has gone up from 5.1% to 5.8% since July. Those with a college degree saw unemployment go down to 2.1% from 2.2%.

Wages for hourly and weekly increased by 11 cents to $27.48. The Wall Street Journal pointed out that this increase made December “the third straight month in which wages more than 3% from a year earlier.”

Despite the numbers, consumer confidence fell in December:

Even though confidence remains historically strong, the report suggested consumers were spooked by the recent rout in global equity markets, weak housing data, and the continuing concerns about the Trump administration’s trade actions this year. A gauge of the nation’s households assessment of the present economic situation fell slightly in December, as well as an index tracking expectations for the future.

“Expectations regarding job prospects and business conditions weakened, but still suggest that the economy will continue expanding at a solid pace in the short-term,” said Lynn Franco, the Conference Board’s director of economic indicators.

However, Ms. Franco also said the recent declines reflect increasing concern about economic growth moderating in the first half of 2019. This is largely in line with what analysts expect, as fiscal stimulus from the late-2017 tax cuts fade, and the Federal Reserve continues to tighten monetary policy. At its latest policy meeting, the Fed revised its 2019 gross domestic product growth forecast down to a 2.3% annual pace from 2.5%.

Despite the growth and decent numbers in 2018, economists predict a slow down in this new year “as the boost from last year’s tax cuts fades, higher borrowing costs weigh on businesses and consumers, and the Trump administration’s trade policies disrupt U.S. companies’ supply chains and business prospects abroad.” Our GDP hit 3% in 2018, but now experts predict 2019 will only get to 2.3%.

The Chinese market could also cause problems:

Tech giant Apple this week lowered its revenue forecast for the first time in more than 15 years due to ebbing iPhone sales in China. White House economic adviser Kevin Hassett said Thursday that other U.S. companies are likely to face growing difficulties in the Chinese market in the months ahead as the world’s second-largest economy slows amid trade negotiations.

The uncertainty has weighed heavily on financial markets. U.S. stocks in 2018 saw their worst yearly losses in a decade, with the Dow Jones Industrial Average closing Thursday almost 16% below its September peak.

“A broader measure of unemployment, which includes discouraged workers and those working part-time for economic reasons, remained stable at 7.6% in December.”

What kind of fucking mindless gobbledygook is this bollocks?

Look…if you have part time work you are still WORKING and EARNING an income!! How in gods name are these people counted in any kind of unemployment numbers??? And what the fuck is a discouraged worker? Is that something like an undocumented citizen living in a country they have no right to live within?

Just in case you have forgot:

Time for PC to stop:

Proving again that nobody wins a trade war.

I don’t know what idiot you’re aping there, but OF COURSE there are winners and losers when you induce central planning like Duh Donald has done. That’s kind of the point.

Winners are the interests (business and unions) that are CHOSEN winners. The losers are competition and the American consumer.

Another class of winners are the very worst forms of lobbyists. When you have businesses forced to implore the government for 30,000 “exceptions” to dictatorial tariffs, you have 30,000 paychecks being cut to allay the stupid, resulting in the most wasteful spending imaginable.

Of course, winners are a tiny fraction of losers, but they’re very apparent and vocal. The vast number of losers are without a voice when “planners’ decide to screw with an entire economy “for the greater good”.

In any economic scheme, there are always winners and losers. For the last 20 years, the “winners”, in the US economy, were multinational manufacturers, importers and the big winner, the global financial industry. During that time, manufacturing jobs left the US. This created a significant reduction in surplus capital among workers. This reduced the number of service positions, including financial services, available, which meant that displaced manufacturing workers could not reenter the job market. And, there were not enough service industry jobs. This led, first, to the stagnation of the US economy and then to its contraction.

What Trump did was tilt the playing field through level and in favor of domestic manufacturing. This et up a trickle-up economic situation. Manufacturing expanded in the US. This increased the job market. More people are employed. This allows more people to have more surplus income. This surplus income is usually spent or invested. This stimulates the retail and service industries, as well as domestic financial establishments. This provides increased surplus [aka disposable] income to these industrial sectors, which allows workers in these sectors to buy more manufactured consumer goods, which begins the cycle all over again.

This cycle is not sustainable forever, as it is a close system. And a closed system always eventually reaches equilibrium. But, as foreign consumer markets become more equal to that of the US, trade barriers, such as tariffs, will be reduced to allow for increased exports from the US.

So far, we have seen US manufacturing increase, US employment increase and consumer spending increase. In some industries, such as the petroleum industry, we have seen exports increase, as well. In fact, the only industry where we have seen any reduction is in the financial industry. This is largely due to the Fed raising interest rates. This makes it harder for American industry to expand and essentially protects the global financial industry. Stock volatility is due to fears that the incoming Congress will derail the economic gains made by the Trump administration.

As the playing field becomes more level, trade barriers will be reduced or eliminated.

But the real story is America’s historic labor shortage…

That was sarcasm from my fingers, but when Bloomberg and the WSJ write it, they seem to mean it seriously?

Last I heard, we had something like 7 million more jobs than we have people in the work force, so it would seem that yes, we have a labor shortage, at least in the STEM fields.

And in other news today, the Democrats are already marching to stop job growth with the latest bill as reported by The Hill:

McClatchy previously had a different take about this:

They do not, however, think that standard of transparency should apply to them. The two Democratic leaders of the Senate and the House of Representatives are among hundreds of senators and representatives from both parties who refused to release their tax records. Just 17 out of the 535 members of Congress released their most recent tax forms or provided some similar documentation of their tax liabilities in response to requests from McClatchy over the last three months. Another 19 replied that they wouldn’t release the information, and the remainder never responded to the query.

I can not break the habit of doubting all statistics. There are “seasonal adjustments” and other skullduggery.