Good sign: “Criticism from liberal advocacy groups poured in after Trump announced Rao’s nomination, focusing on her record on deregulation.” 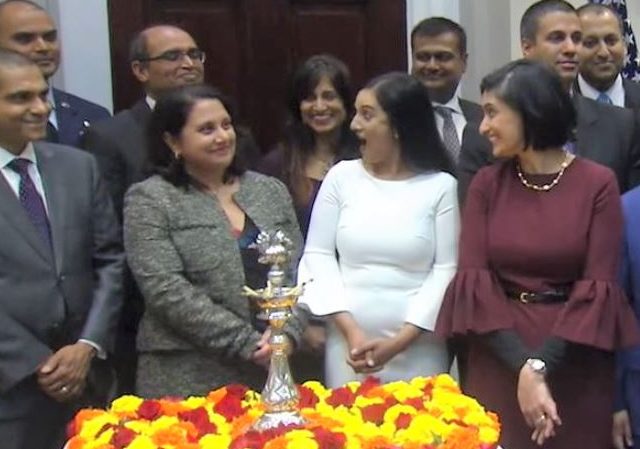 At a White House celebration of the Indian holiday Diwali, Trump indicated that the next day he would be nominating Neomi Rao to fill the seat vacated by Brett Kavanaugh on the D.C. Circuit Court of Appeals:

Administrator of the Office of Information and Regulatory Affairs, Neomi Rao. Hi, Neomi. I won’t — I won’t say today that I just nominated Neomi to be on the D.C. Circuit Court of Appeals, the seat of Justice Brett Kavanaugh. (Applause.) So that could be a big story. (Applause.) We were going to announce that tomorrow — (laughter) — and I said, “You know, here we are, Neomi, we’re never going to do better than this right?” (Laughter.) I thought it was an appropriate place. So, we’re 24 hours early, but she’s going to be fantastic. Great person.

Who is Neomi Rao? Her Federalist Society Bio makes pretty clear she has impeccable conservative legal pedigree, including having clerked for Justice Thomas:

Prior to joining the Law School, Administrator Rao served in all three branches of government. She served as Associate Counsel and Special Assistant to President George W. Bush. Administrator Rao also served as counsel to the U.S. Senate Committee on the Judiciary, where she was responsible for judicial nominations and constitutional law issues. In between government service, Administrator Rao practiced in the London office of Clifford Chance LLP, specializing in international law and commercial arbitration. After receiving a B.A. from Yale University and Juris Doctorate from the University of Chicago, Administrator Rao clerked for Judge J. Harvie Wilkinson III on the U.S. Court of Appeals for the Fourth Circuit and for Justice Clarence Thomas on the U.S. Supreme Court.

As Trumps “Regulatory Czar” she has promoted cutting regulations, as she explained in a Washington Post Op-Ed in October 2018:

Over the past two years, federal agencies have reduced regulatory costs by $23 billion and eliminated hundreds of burdensome regulations, creating opportunities for economic growth and development. This represents a fundamental change in the direction of the administrative state, which, with few exceptions, has remained unchecked for decades. The Obama administration imposed more than $245 billion in regulatory costs on American businesses and families during its first two years….

Our commitment to these good regulatory practices has contributed to the incredible economic boom since President Trump took office. Across America, businesses and families are experiencing greater economic freedom, and we project even more significant results in the coming year.

Conservative legal scholar Jonathan Adler is thrilled with her nomination:

This is a stupendous choice. Neomi Rao is, hands down, the best possible pick for the vacancy on the D.C. Circuit. https://t.co/oIJf9gPxLi

As is Hugh Hewitt:

This is such a glorious appointment. My interview with the future judge from last December (in which we discussed the Special Counsel regs, btw): https://t.co/98n46PGGlQ https://t.co/P6ZF5cnYfL

In perhaps the best sign, Buzzfeed notes that liberals are not happy:

Criticism from liberal advocacy groups poured in after Trump announced Rao’s nomination, focusing on her record on deregulation.

“Rao has never seen a regulation she didn’t hate, and as a judge would dismantle 40 years of environmental and social progress,” Brett Hartl, government affairs director at the Center for Biological Diversity, said in a statement. “Her confirmation would be the most damaging and regressive yet by Trump after Kavanaugh and Gorsuch.”

Sounds like another solid Trump judicial nomination. Who knows, if Trump is reelected, Rao could be in line for a SCOTUS spot once she has a few years on the bench.

so this is RBG replacement …..

I understand the liberals already had their talking points made out:

Looked up her bio earlier today. Her parents are Parsi from India, both physicians. I wonder if she is Zoroastrian, like her parents? If so, she is likely the first Zoroastrian named to the Federal Bench. I wonder if the Dem/Thugs will attack her religion?

Well, I should certainly hope so. We can’t have the Dems attacking only Catholics!

If so, she is likely the first Zoroastrian named to the Federal Bench.

That’s one which the lefty media will walk a mile to ignore. It’s only a ‘progressive’ who gets the front-page accolades for being the ‘first left-handed purple transy’ dog-catcher in Peoria.

A Zoroastrian Asian wouldn’t last ten seconds under the scrutiny of an MSM editor contemplating the power of a Judge on the DC Circuit.

Are you SHV from hillaryis44.org?

Color, maybe. Character, certainly. She qualifies on her merits.

So she has one very important and very real qualification and two identity based qualifications. She seems like a winner no matter how those three cards are shuffled. No doubt Ds will raise hell anyway.

If the left is already this butthurt when the process hasn’t even really started yet then I approve.

I can’t wait for the nomination hearing IFO the Senate Jud. Comm. Will the Ds go after every facet of her life and bring in questionable witness to claim some misdeed long in the past? She is a woman, with dark skin, so they have to tread lightly to avoid looking like *they* are attacking women and POC. I hope they televise the hearing.

Will Liz Warren challenge a real Indian? This will be good.

While warlock trials are the current rage, the optics are not nearly as favorable, and we are overdue for, a witch trial. I can just imagine an #OccupyTemple movement lead by Antifa, accompanied by a Slut Walk parade, full of pride and prejudice, to protest her social discretion.

The Dems put so much pressure on Estrada BECAUSE he was Hispanic, his wife began drinking hard liquor and then killed herself within six months.
That was considered a trophy by Biden.

“SHV | November 13, 2018 at 9:35 pm
Looked up her bio earlier today. Her parents are Parsi from India, both physicians. I wonder if she is Zoroastrian, like her parents? If so, she is likely the first Zoroastrian named to the Federal Bench. I wonder if the Dem/Thugs will attack her religion?”

I think her husband is Jewish.

Wonder how her childhood was spent? I suspect we will learn she was a Kavanaugh enabler. Likely chose the rape party locations from their innumerable choices and guest lists.

Another excellent choice from the most effective conservative president in the last half century.

Yet the GOPe members chose to retire and let the blue rivlet take the House. As Rush noted…. the “establishment” has nary a concern that what is inflicted upon the country is just a passing fancy that can be corrected whenever the “appropriate” GOPe candidate comes along. With the GOPe, Nero would have had at least a string quartet.

Of course. It wouldn’t be Democrats if wasn’t over right, constant criticism. I’d hate to be one of their kids.

After Kavanaugh, anybody, anybody that agrees to be nominated to any judicial post by this administration has my admiration. They and their families and their friends and supporters will go through hell, and they know it.

Well, this is the DC Circuit, not SCOTUS, and so far the Dems haven’t made that big a fuss over lower courts. To their credit, Grassley and McConnell have been pushing them through fairly quickly.

Now would be a good time for the Rep.s to pull out one of the Dem.s race cards with an attached sexist card.

Trump should do the lefty move. Nominate some seriously outrageous people to get their ire up, then be willing to compromise on who he wanted in the first place. Five percent shifts over time add up.

If you don’t want her to “dismantle 40 years of social and environmental progress” then don’t bring those cases forward. Live with the results of the lower courts, which do not have the scope and power of the District Court.