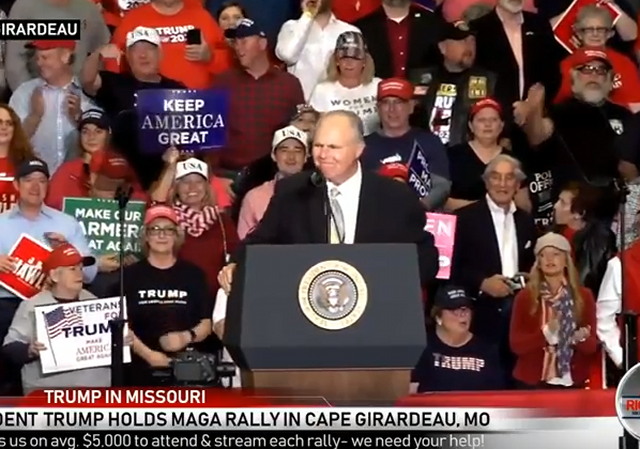 Rush Limbaugh gave a speech at the Trump rally in Cape Girardeau, Missouri last night. He spoke for about 10 minutes before Trump took the stage and made some great points about the midterms, and the impact Trump and his supporters have had on American politics.

Rush doesn’t do many live events like this. In fact, this is the first one I can remember since he gave the keynote speech at CPAC in 2009.

Rush began his speech by praising the crowd for their energy, amid chants of “USA!” then joked about another chant he’d like to hear, which materialized a few minutes later as “Lock her up!”

He then spoke about the Democrats and the media labeling Trump and his supporters as divisive saying, “Divisive? The Democrats haven’t even accepted they lost the election in 2016! That’s what this is all about!”

Rush is right on in making this point. Democrats, the media, and even some establishment Republicans still believe Trump’s 2016 victory was a fluke that can be somehow corrected. A Republican win in this midterm would be a confirmation that the outcome of the 2016 election was not a mistake. Even if the Democrats manage to win the House, it will not be seen as a wave if they do so with only a handful of seats.

Rush also pointed out something you don’t hear from the media when they cover Trump rallies. He said they are the envy of everyone in Washington and that no other political figure today is capable of consistently turning out such massive crowds.

“Have you seen Obama? He’s been stumping down in Florida, where I live. He’s drawing crowds of a thousand people, two thousand people. Joe Biden can’t fill a phone booth because he’s looking for somebody to punch out.”

On the subject of the caravan, Rush noted the leftist narrative of any criticism as racist. “It’s an issue of law. Why should we stand aside and let people break the law? What’s so hard about this?”

Limbaugh said that Trump doesn’t need the grief or abuse which has come with being president but takes it anyway because he felt America was headed in the wrong direction. “He doesn’t need it. He puts up with this, and thank God he does.”

Democrats will never accept that they lost in 2016. They haven’t admitted they lost in 2000, or 2004 either. In 2050, they’ll still be demanding that Florida recounts by the hanging chad with slight dimple on one corner technique.

A friend just sent me a pic (sorry, no URL) of a dismally attended Obama rally with the caption “1/1024th of a Trump Rally” I just love it when multiple SNAFUs can be strung together.

Once again, the Dems show they have no sense of irony:
https://thehill.com/homenews/campaign/415292-biden-i-guarantee-trump-will-challenge-legitimacy-of-election-if-gop-loses