Maxine Waters promises payback if Dems win House: “I’m going to do to you what you did to us”

Maxine Waters promises payback if Dems win House: “I’m going to do to you what you did to us”

Will be Chair of House Financial Services Committee, and wants retribution against financial institutions and Trump’s “no good values” 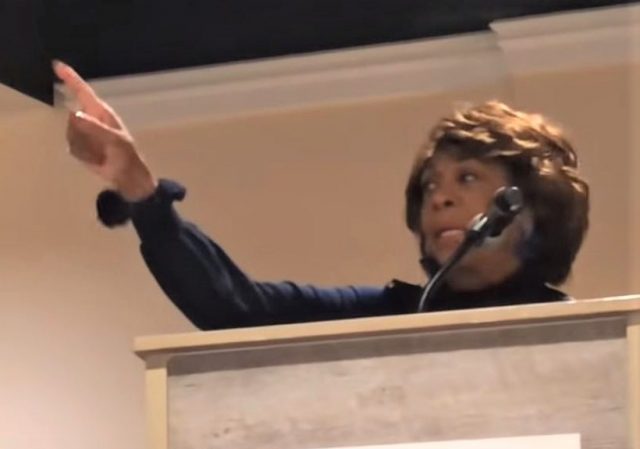 Representative Maxine Waters (D-CA) has been an outspoken critic of President Trump.  She’s called for his impeachment and then promised to follow that up by “going after” Vice President Mike Pence; she’s called for #TheResistance to find and confront Trump officials wherever they are.

She’s infamously let slip that she would like to nationalize the oil industry and has been embroiled in a long list of questionable ethics- and nepotism-related scandals.

Waters is now promising retribution (revenge?) against America’s financial institutions if the Democrats win control of the House in Tuesday’s midterm elections.  If that occurs, Waters will likely be named to chair the Financial Services Committee, and she promises to use that position to go after “all of Wall Street . . . . all the insurance companies . . . all the banks.”

If Democrats take over the House in the midterm elections, Maxine Waters has some scores to settle.

The California congresswoman told a group of constituents what’s in store for her enemies, should she gain the chairmanship of the Financial Services Committee.

. . . . “First of all, if we take back the House, most of the members of the Congressional Black Caucus will be chairs of the committees of the Congress of the United States of America,” Waters said, waving her fingers as the audience applauded.

“I will be the first African-American, the first woman to chair the powerful Financial Services Committee.

“That’s all of Wall Street. That’s all the insurance companies, that’s all the banks. And so, of course, the CEOs of the banks now are saying, ‘What can we do to stop Maxine Waters because if she gets in she’s going to give us a bad time?’” she said.

“I have not forgotten you foreclosed on our houses,” she warned.

“I have not forgotten that you undermined our communities,” she continued with the tone of a preacher.

“I have not forgotten that you sold us those exotic products, had us sign on the dotted line for junk,” she yelled, “and for mess that we could not afford.”

“I have people who are homeless who have never gotten back into a home. What am I going to do to you?

Interestingly, she begins this threat by noting that President Trump is unpresidential and that he “has no good values.”

President Trump is warning that should Democrats win, Waters will be “in charge of our Country’s finances.”

President Trump warned voters against the Democratic Party’s takeover in the upcoming midterm elections, saying their victory will mean California Congresswoman Maxine Waters will be put in charge of the country’s finances.

The president appears to be referencing a Fox News report that said Waters is likely to take the reins of a powerful House committee in the event of Democrats retaking the lower chamber.

The 80-year-old lawmaker from California, who Trump previously called a “low-IQ individual”, is likely to be promoted to chairwoman of the House Financial Services Committee, where she’s currently the ranking member. The committee has the power to subpoena and direct the fate of certain bills before they even reach a floor vote.

The committee oversees the housing, banking, insurance, and securities industries.

The idea that Maxine Waters could regain power and become head of the financial services committee is truly insane. Yet, if Republicans don't turn out to vote on Tuesday, this could become a reality. pic.twitter.com/fByd8nueLN

Holy shit, can you imagine @RepMaxineWaters in charge of a lemonade stand, let alone Chairman of Financial Services. Yikes, it'll be like Nightmare on Elm Street repeated daily.#redwave

It’s always gloom & doom, poor me attitude. How does she keep getting elected. My dog is smarter than her!Maxine Waters Vows Retribution if Dems Take House | Breitbart https://t.co/OWJTXbqkbh via @BreitbartNews

Once upon a time, we laughed at the antics of @RepMaxineWaters. The time for laughing has ended. This woman is corrupt to the core and desperately wicked. She needs to retire from politics but she won’t. It’s up to voters to #VoteRed?? https://t.co/YcCDItIrz9

One of the many faces of mental illness. Maxine is utterly intoxicated with venom, hatred, incivility and stupidity. She is the face for MLK’s “content of character”.

And with that “Content of Character” spewing from her diatribe of “when not if” she takes her rightful seat, lets factor in her guru friendship with Lewis Farrakhan, currently visiting in Iran sharing his sentiments about America with Iran’s leaders that will assist her with their agenda.

Bless her little heart! So much misplaced ambition in such a wrinkly old brain.

We need to kill all affirmative handouts, government should be completely race neutral, and everything and everyone should be judged solely on merit. Those who do not measure up should be kicked to the curb.

And if they don’t take back the House, all the rich progressives can move—not to Canada, but to Zimbabwe, which should be pretty much like Maxine’s dream.

Hitler told the world what his plans were in Mein Kampf.

A moron like Maxine Waters probably can’t write any better than Odumbo (and she doesn’t have Bill Ayers to write a couple of books for her), but she is warning America what her “plans” are.

She is a deranged, violent fascist, without the fakery that was able to surround the Odumbos. The prospect of her gaining any more power in government than she already has will lead to violence and oppression not seen in America since the Civil War.

This crazy old crow probably has dreams of being a commandant of a modern Andersonville FEMA camp the likes of you and I might wind-up in.

I’m confused. What, exactly, was done to her or her constituents that came from Trump or Republicans?

They probably got jobs and are bringing home more on their paychecks, and if that’s the case they don’t need Maxine. She can’t be having that!

They and her feelings were hurt by truth.

So much for chairing Finance if this represents her best “Financial Accum.”

And, of course, political congruence. The seminal bellwether of far-left political philosophy.

It’s incumbent on every Republican voter to keep her out of the chairmanship. Hell, it would be a very excellent night if the voters of her district voted her out entirely. Her and San Fran Nan.

Her “voters” are as dumb as she is, having no concept of the idea of limited government. Read below the huge percentages who vote for her. These are through-and-through indoctrinated constituents.

Upon the retirement of Augustus F. Hawkins in 1990, Waters was elected to the United States House of Representatives for California’s 29th congressional district with over 79% of the popular vote. She has been reelected consistently from this district, renumbered as the 35th District in 1992 and as the 43rd in 2012, with at least 70 percent of the vote.

Waters has represented large parts of south-central Los Angeles and the Los Angeles coastal communities of Westchester and Playa Del Rey, as well as the cities of Torrance, Gardena, Hawthorne, Inglewood and Lawndale.

Average black IQ is 85, even Hispanics are smarter. Maxine appears to be below average of her people.

What needs to happen is a thorough investigation into Maxine, followed by prosecution.

Is her entire district like a very large mental hospital compound or something!?!? Seriously an actual NPC would be a vast improvement.

Good luck with that, you batty old hag. Without the Senate and the WH, you’re going to be twisting in the wind, looking like a bunch of petulant children.

She apparently has forgotten that if banks were allowed to keep traditional underwriting practices there would have been no foreclosed houses because unqualified borrowers like these wouldn’t have been given a loan. She was first in line to call these banks racist and demand they lend to anyone who could fog a mirror even if they couldn’t afford it. Then when the experiment predictably failed (because Waters doesn’t understand that home ownership doesn’t make you middle class; it’s an effect not a cause) she blames the banks for foreclosing. Idiot.

I must strongly disagree with your labeling Mrs. Waters an “idiot.” That is just WRONG!!!

Let us be rational and logical and adult about this. I fear that “idiot” does not adequately describe that mouthy wench. The more severe “moronic” is, I believe, a more adequate descriptor of that sub-human mouthy next-to-worthless waster of the vital oxygen the dame takes away from more intelligent creatures such as radishes and heads of lettuce. Thank you.

On the Levine and Marks IQ scale, moron is two steps above idiot. She’s an idiot.

Even if the Democrats control the House, Maxine is not going to be able to get her agenda past a Republican Senate and a Republican President.

As a committee chairman she can punish bank executives just by constantly hauling them in to testify and making unreasonable demands of them; that’s more or less how the banking system got screwed up in the first place in the ’70s and ’80s.

Yeah, except we didn’t “do” anything to you, Waters. But sure, just keep on talking.

Waters is still in front of House Ethics (The place where the GOP goes to die and the Democrats thrive) for passing a bill that greatly benefited her husband’s bank and their personal wealth without revealing the conflict.
Known by the SEC in other circumstances as “fraud”.
How substantial was the effect? $20M.

Wicked witch of the west Waters exhibiting her 85 IQ level. Her street-thug backers must be so proud to have a hussy to keep the taxpayer-paid handouts coming.

Oooooh! If that’s the case can we threaten her life and chase her out of restaurants and perhaps even have a lone shooter gun down one of her Democratic pals on a baseball field, like they’ve done to us?

(My sarcasm tag got stripped.)

That’s essentially the claim. That consumers have no option but to buy whatever the evil capitalists want to sell them. Cigarettes, alcohol, drugs, loans they can’t afford, etc.

Per 75% if LI articles this is another example of the rapidly changing US demographic. No matter how hard to believe get used to it.

Would that be to sit around the campfire and sing Coumb Bi Ya My Lord? Auntie Maxine.

I held my nose and cast a ballot for a Republican candidate that I detest – because of Maxine Waters and people like her. Even if we’d had a third party option, I’m not sure I’d have taken it.