November 30 is the official day for commemorating the Jewish departure and expulsion from Arab and Muslim lands.

The commemorative day was designated by Israel’s legislative body back in 2014 and comes as a belated recognition of the collective traumas experienced by the between 850,000 to 1 million Jews who were expelled or who fled their homes in the Middle East and North Africa over a span of some three decades (from the 1940s until the 1980s) as a result of persecution and discrimination.

Over 850,000 Jews were expelled or forced to flee in the years following 1948. To this day, no reparations have been made. #Jewsof48 #JewishRefugees pic.twitter.com/hXBaD7kVPo

The other Nakba: this was the newspaper on May 16, 1948, when the Arab states began a bloody campaign of persecution against their own Jewish communities out of antisemitic vengeance against Jews for the state of #Israel being declared. pic.twitter.com/slCx2gtyZB

In several prior posts we highlighted how thriving Jewish communities in Arab countries of the Middle East and North Africa (and in non-Arab Iran) were wiped out during these years as Jews were subjected to arrest, properties and assets were seized or set on fire, and draconian anti-Jewish laws were instituted. These historic communities were centuries old and even predated Islam and the Arab conquest of the region in the seventh century:

As we discussed, violence against Jews was either instigated or tolerated by the authorities:

The hostility led to waves of Jews being uprooted from their homes, and sometimes fleeing for their lives—typically with nothing other than the clothes on their backs.

The loss was devastating. In fact, experts believe that the Jewish exodus from Arab/Muslim lands was larger than the Arab refugees of what is referred to as the ‘Nakba’ (catastrophe), both in terms of the numbers of people displaced and the loss of property (approximately $350 billion of Jewish property was destroyed or seized during these years).

But the paramount loss was to Middle Eastern states and societies. Of the estimated 1 million Jews in Arab countries in 1948, the year Israel was established, today only some 5,000 remain.”

Not a lot of people know the stories of these “forgotten” Jewish refugees precisely because they didn’t stay refugees for very long. That’s because Israel re-settled the Jewish refugees and was able and willing to absorb them.

As Lyn Julius, who has written a book about how “3,000 years of Jewish civilization in the Arab world vanished overnight”, pointed out in a Jerusalem Post article published earlier this week:

Israel treated the refugees as Zionists returning to their homeland. Mizrahi Jews were encouraged not to look back to the past, but to build new lives for themselves in Israel and the West.”

By contrast, the Arab countries failed to absorb the approximately 700,000 Arab Palestinian refugees who were displaced during the 1947-1948 war for Israel’s independence.

As we’ve noted in several recent posts, the reason that these Palestinian Arabs became refugees wasn’t because of any master plan on the part of the Zionists to expel them, as no such policy existed.

On the contrary, the historical evidence, and even the personal stories and accounts of the refugees themselves, shows that many fled their homes and villages in the heat of war or because they were instructed to do so by Arab leaders and military officials. They also greatly feared being mistreated by the advancing Zionist armed forces, based on the lies that were told to them about a horrible massacre that had been perpetrated on some defenseless Arab villagers by Jewish paramilitary groups—a brutal incident which in fact never happened:

Still, there should be no doubt that the Arabs who fled their homes during the 1948-49 war endured many hardships, not least on account of the fact that the neighboring Arab countries were unwilling to absorb them.

Their plight was also compounded by the fact that the UN agency tasked to assist them never worked to facilitate their resettlement and instead allowed their numbers to balloon, resulting in a shameful mistreatment that continues to this day (for example, see our post about the ongoing discrimination and deprivations that the descendants of the Palestinian refugees face today in Lebanon).

Basically, the Arab Palestinian refugees were placed in camps and deliberately kept there for 70 years, with complicity of the United Nations, in order to exploit them as a propaganda weapon to sow hatred against Israel.

So, it’s important that there be a greater understanding of Israel’s remarkable and unprecedented absorption of the hundreds of thousands of Jewish refugees who desperately flooded into the young state precisely because it powerfully underscores the extent to which the Arab/Muslim world neglected their own.

That is, commemorating Jewish Refugee Day isn’t only a step toward obtaining proper redress and compensation for the descendants of the Jewish refugees—it’s also a way to begin the long-overdue process of securing Palestinian refugees the justice they’ve also been denied in other Arab countries and by their own governments in the West Bank and Gaza.

Acknowledging the Jewish refugees, the “suffocation and extinction” of historic Jewish communities, and the catastrophes that befell the Jews in Arab and Muslim lands is important not only for historical truth and for setting the record straight about Arab and Muslim antisemitism and the Jewish experience in the Middle East and in Arab countries. In fact, knowing more about this tragic and little-known chapter in Jewish history is also essential for securing justice for the Palestinian refugees too. 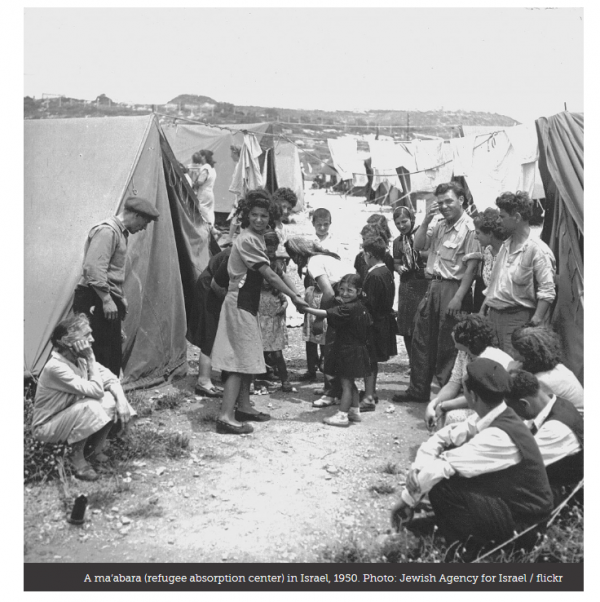 Bottom line: It’s inaccurate to present the refugee problem as one-sided with an exclusive Palestinian victimization because the number of Jews forced to leave their homes in the Arab world—at least 850,000 with some experts putting the figure as high as one million—was greater than the number of Palestinians who became refugees as a result of the 1948-49 war. The reality is that there were two tragedies or two “nakbas”.

Miriam F. Elman is an Associate Professor of Political Science and the Inaugural Robert D. McClure Professor of Teaching Excellence at the Maxwell School of Citizenship & Public Affairs, Syracuse University. She is the editor of five books and the author of over 65 journal articles, book chapters, and government reports on topics related to international and national security, religion and politics, and the Israeli-Palestinian conflict. She also frequently speaks and writes on the Boycott, Divestment, and Sanctions (BDS) anti-Israel movement. Recently, Elman was included on the Algemeiner newspaper’s 2018 list of the top 100 people worldwide who are “positively influencing Jewish life.” Follow her on Facebook and Twitter @MiriamElman

“The Lordbless thee, and keep thee:

The Lord make his face shine upon thee, and be gracious unto thee:

Back in the day, even the holocaust denying NY Times still saw clearly enough at times to know that ideology mattered.

Isreal comprises one-tenth of one percent of all the land in the middle east, yet ‘from the river to the sea’ is the cry of all the racists and Jew haters. Because the Koran commands this violence against Jews.

My fat, dyslexic fingers should learn to spell Israel properly.

“essential for securing justice for the Palestinian refugees too.”

Palestinians need to take some responsibility for their condition. They intentionally reproduced in excess and use those children as weapons. They squander aid. They allow the dredges of their society to govern them.

Regarding other Arab countries not being willing to take Palestinians, it is really hard to believe they should take sucg a degenerate group.

Those of us who understand history of this have known about it.

I suggest a two pronged attack. How about international lawsuits against each country which stole from Jews for both the initial value and compounded interest? And, how about seizing the territory around Israel, and driving dim witted Palestinians into the ocean.

One goal being to rub middle eastern faces into their ineffectively perfumed smelly armpits.