Gillum will not concede in the governor race. 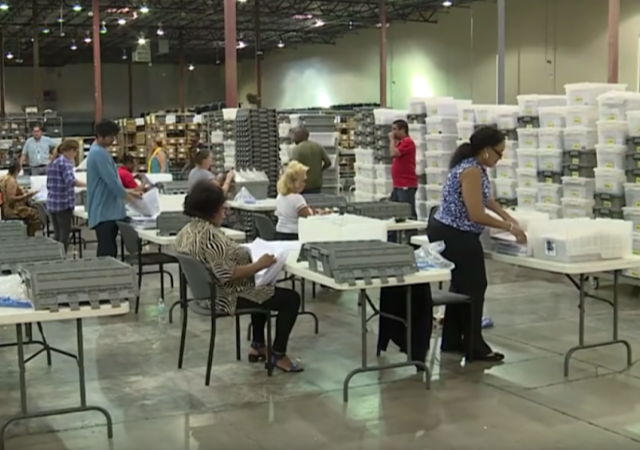 The Florida recount drama continues as Palm County Beach missed the 3PM ET deadline due to faulty machines. Broward County managed to make the deadline at the last minute.

Florida has posted the results. It looks like Republican Ron DeSantis will win over Democrat Andrew Gillum, who refuses to concede.

The race between incumbent Democrat Sen. Bill Nelson and Republican Rick Scott fell at the 0.15% margin so the state has ordered a hand recount.

The Florida Senate race between Sen. Bill Nelson (D-Fla.) and Gov. Rick Scott (R) is heading to a hand recount after the latest round of machine tallies showed the two candidates still neck and neck.

Nelson and Scott were separated by a margin of about 0.15 percentage points, according to results of a machine recount released Thursday – a narrow enough margin to trigger a hand recount under state law.

The hand recount must be completed by Sunday, in time for a Nov. 20 deadline for state officials to certify the final election results.

A manual recount does not mean that every ballot is counted by hand. Instead, local election officials will sort through so-called overvotes and undervotes – ballots on which voters marked either more or fewer than the maximum number of selections allowed.

Nine days after Florida’s Election Day, the deadline for machine recounts of three statewide races came and went Thursday, but Andrew Gillum refused to concede and urged vote counting to continue even as his margin behind Ron DeSantis was slimmed by just one vote.

“A vote denied is justice denied — the State of Florida must count every legally cast vote,” Gillum said in a statement as the machine recount was completed in 66 of 67 counties. “As today’s unofficial reports and recent court proceedings make clear, there are tens of thousands of votes that have yet to be counted. We plan to do all we can to ensure that every voice is heard in this process.’’

Palm Beach County is the only county out the 67 that missed the 3PM ET deadline. This means that the count that took place on Saturday will hold. From NPR:

Palm Beach County, a heavily populated Democratic stronghold in the state which has been plagued by antiquated, failing equipment, failed to meet the deadline and submitted initial tallies collected on Saturday.

“It was a heroic effort,” Palm Beach County Supervisor of Elections Susan Bucher told reporters after the deadline passed. “We were adding our up our tallies and you can see they were adding up but we just need some more time.”

Is anyone surprised that the county set aside $11 million to purchase new voting equipment? No one ever bought them “because the state needs to resolve a question about voting system compliance with the Americans with Disabilities Act.”

The Miami Herald reported that the machines overheated on Tuesday, which forced officials to recount 175,000 early votes.

Machines were fixed on Wednesday, but “the new vote totals didn’t match the totals from before the machines malfunctioned.” A manager had to find “several boxes of ballots that had already been recounted but whose tallies were lost when the equipment overheated.”

The Miami Herald explained what happens next:

A spokeswoman for Secretary of State Ken Detzner said Tuesday that by law counties should continue counting past the deadline so that final tallies can be included in official results, which are due on Nov. 18 and will be certified by the state on Nov. 20. If Palm Beach doesn’t make that deadline, the county’s previously submitted results will automatically be considered official.

Bucher said Thursday afternoon that the county had submitted its results from Saturday in lieu of machine recount results. Elections staff were preparing for a manual recount of the ballots cast in the Senate race, expecting that one would be ordered by the Secretary of State. Palm Beach has 5,950 ballots with overvotes and undervotes in the Senate race, which Bucher said had already been identified and would only take a few hours to hand count.

After the manual recount is complete, Bucher said she would like to continue with the other recounts if she gets permission from a federal judge.

Nearby Broward County met the deadline at the last minute because officials had to spend today “duplicating and counting” around 400 ballots. This is duplication:

Duplication happens when there’s a physical problem with the ballot — like a rip or coffee stain — or the canvassing board needs to clarify voter intent — like when voters make unclear scribbles instead of filling in a bubble. First the judges check that the ballot needs to be duplicated, including adding sticky notes with their ruling on voter intent, then the staff copies over the votes to a new ballot.

The judges get to compare the new and old ballots again for accuracy before the new ballot is counted and the old ballot is trashed.

Three races went through the machines because the results had under a .5% margin: “race between Andrew Gillum and Ron Desnatis; the U.S. Senate race between Sen. Bill Nelson and Gov. Rick Scott; and the commissioner of agriculture race between Nikki Fried and Matt Caldwell.”

If these results come under .25% then the officials will have to do a manual recount.

No, not faulty machines. Everybody else had the same machines. How come they didn’t miss the deadline? PBC missed the deadline due to horrendous maintenance practices and total contempt for planning ahead.

But why would you plan ahead when you have pet judges all set to kiss your boo-boos and give you a zillion extensions?

Because, they are crooks.

Not all counties have the same machines. It is within the discretion of the County Supervisor of Elections which voting system they purchase, within state guidelines IIRC. The PBC SOE is being disingenuous by blaming the worn out machines which she purchased and failed to maintain.

I would like to know the definition of “antiquated”.

Since Florida used a vastly different voting system as recently as the 2000 election, they can’t be older than 18 years. That’s a long time in the high tech world, but one would hope that voting machines would be both simpler and more rugged than your average desktop workstation.

Maybe the SOE got a bargain price on used voting machines?

It has been reported Broward did not report its results until 2 minutes after the deadline, therefore Scott did not receive an improvement in his vote total per the recount; rather the original figure was used.

Yes it goes to a hand count anyway but…

Not a Blue Wave it is a Crime Wave.

Question re: hand count. It is reported that any ballot with an under vote will be hand counted. In my county I did not vote on some races because 1) I didn’t care or 2) I didn’t know enough about the candidates to cast a vote. I’m referring to minor county posts not any of the major races. So does that mean that my ballot will now be hand counted?