Not since Christine O’Donnell’s 2010 campaign have witches featured so prominently in campaign news. 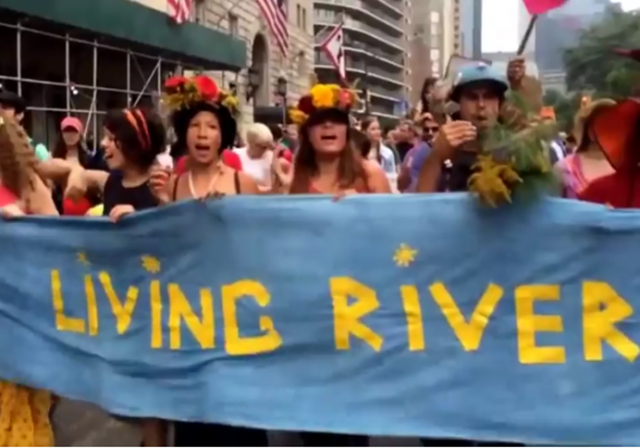 We recently noted that witches were planning to hex US Supreme Court Justice Brett Kavanaugh.

I would argue that the 2018 campaign cycle has been magical, indeed….for Republicans. It is now being reported by Washington Examiner contributor Philip Wegmann that Rep. Kyrsten Sinema, the Democratic nominee for U.S. Senate from Arizona, summoned witches to help her rally against the Iraq War when Sinema.

Emails obtained by the Washington Examiner show Sinema inviting a prominent coven of feminist witches in Arizona called Pagan Cluster to celebrate International Women’s Day and to protest the war in March of 2003. Code Pink protesters wore pink, obviously enough, and the Women in Black wore black. But Sinema encouraged the witches to wear “colorful clothing and come ready to dance, twirl, and stay in touch with your inner creativity and with the Earth.”

The Sinema campaign would not say why she invited the witches or clarify why she thought members of the occult deserved a seat at the table during discussions concerning war and peace.

We practice the art of changing global consciousness by incorporating music, drums, ritual, myth, humor and magic into our actions.

Events involve a large diversity of groups with differing strategies, but our Cluster always remains committed to nonviolence. Members decide what each action will include by sharing spiritual insights and participating in direct democracy.

Many of us have roots in the Reclaiming Tradition of feminist Witchcraft and identify with Reclaiming’s Principles of Unity.

How their practice plays out, in reality, can be observed during the 2014 Peoples Climate March.

I do not recall witchcraft being featured so much during a campaign season since the 2010 race for the Senate seat in Delaware, when Republican candidate Christine O’Donnell had to explain that she was not a witch after a clip surfaced in which she said about her younger years, ” I dabbled into witchcraft – I never joined a coven”.

The most recent news I can find on O’Donnell indicates that she and Sinema may not just share a connection to witchcraft. Here’s is the former Delaware candidate’s views on candidate Donald Trump during the 2016 election.

… O’Donnell said she could not tolerate Trump as the nominee of her party.

“He did nothing to liberate the middle class from political correctness until he decided to run for president,” she said.

“He’s not actually doing anything except inciting riots,” she added, a reference to Trump’s comments Wednesday where he said his supporters would “riot” if he was denied the Republican party’s presidential nomination if showed up at the Republican convention this summer with the requisite 1,237 necessary to win the GOP nomination — and was denied by party insiders.

I suspect Sinema will be as successful in Arizona as O’Donnell was in Delaware.

Perhaps Kyrsten Sinema could call in the Pagan Cluster to minister to the Meth Lab of Democracy. From @PhilipWegmann: ‘Emails: Kyrsten Sinema summoned witches to her anti-war rally.’ https://t.co/3yk2MeKnx8

Kyrsten Sinema should explain that she’s only 1/1024th witch.

Birds of a feather, flock together … even if it is on brooms.

Witches and puppets and drums, oh my!

She may just be gathering up all the Usual Suspects for demonstrations. The question is, who pays their expenses?

Unlike Antifa they are not destroying private and/or public property and are not threatening or actually physically attacking those not agreeing with their Antifa views so I have no problem with these folks. They provide some color to the event and enliven the parade. As for anything religion related none of it of any type or variety can be proven or disproven. Unlike too many of the Islam folks the “witches” are not trying to FORCE their religion upon any person or country as those Moslems are wont to do.﻿

They are doing a public service by informing sane rational men to stay the hell away from them. I realize this every day in Portland when I see women who clearing tossing out bait for a species different than me.

I was wondering during the Kavanaugh thing if O’Donnell was going to get mentioned!

“Not since Christine O’Donnell’s 2010 campaign have witches featured so prominently in campaign news.”

Oh come on! The 2016 election was all about Hillary!

Am I imagining it or is this whole “Witch as Goddess” movement somehow a sexual issue?