Meanwhile, the eruption of Kilauea is slowing down 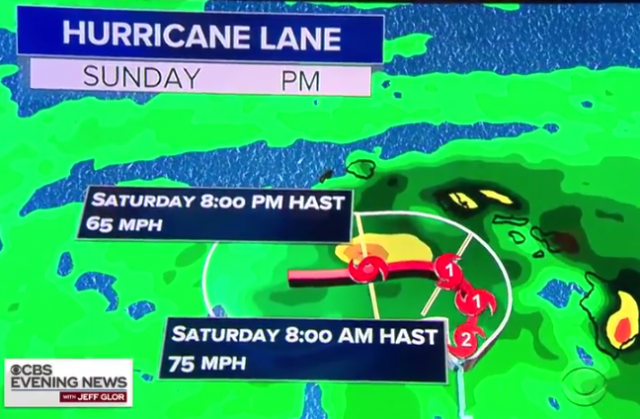 Hawaiians are still hunkering down in the wake of Hurricane Lane, which has weakened so much that it has been officially downgraded to a tropical storm. However, the islands’ residents still face flooding and landslides in its wake.

Even a steadily weakened Lane has dumped nearly 3 feet of rain on parts of the Big Island of Hawaii over the past two days, forcing residents to flee their homes in waist-high water and officials to clear a series of landslides.

Early Saturday, the storm was about 135 miles south-southwest of Honolulu packing winds of 65 mph. It was moving slowly to the north-northwest at 3 mph.

The National Weather Service warned that even a tropical storm can bring dangerous winds and noted the threat of flooding was still present through Saturday, particularly on the Big Island.

“The potential for additional excessive rainfall remains high, which will lead to life threatening flash flooding, as well as landslides,” the NWS said.

President Donald Trump called Hawaii’s Governor Gov. David Ige to offer support for island residents, after officially declaring a state of emergency this Wednesday ahead of the storm’s hitting the islands.

Trump and Ige discussed preparedness and emergency response measures for the Category 2 storm, the White House said in a statement Friday evening.

“The president reiterated that the Federal Government is fully committed to helping the State in the response and recovery efforts related to Hurricane Lane,” the statement added.

And while some eco-activits would like to blame “climate change” for this rare Pacific weather event, more reasoned explanations are being offered.

…[I]t helps to understand why tropical storms are so rare in Hawaii. The islands are shielded by an atmospheric feature known as a subtropical ridge. Over land, this type of high-pressure zone causes deserts like the Sahara or Kalahari. But over oceans, it drives trade wind belts that deflect storms. According to Climate Central, that high pressure is particularly strong from May through October, prime hurricane season.

But there are currently warmer-than-average sea surface temperatures to the east and south of Hawaii, where Hurricane Lane formed and is tracking. This could be linked to El Niño, the Pacific Ocean patterns that can cause record-setting warm weather. The National Oceanic and Atmospheric Administration said this week that, by September, the chances of El Niño in the Northern Hemisphere rose to about 60 percent.

“These type of major hurricane tracks and threats to the Hawaiian islands, although infrequent, are not unprecedented,” he added. “Lane is well within this envelope.”

Hawaii’s tourism trade is trying to adjust to the second major national disaster it has faced this year, the first one being the eruption of Kilauea on the Big Island.

The Hawaii Tourism Authority advised residents and visitors to shelter in place while the hurricane passed and to have access to a 14-day supply of food and water. Shelters were being opened statewide for people in flood zone areas in case of evacuation.

Hotels stocked up on supplies and put emergency preparedness plans in place. Many were offering to waive cancellation fees.

In a bit of good news for the the state, Kilauea is slowing down after months of eruption.

While the volcano was at its most active, it was experiencing collapse events at the summit near-daily that sent shakes across the island for weeks on end. Lava also flowed across the region, covering acres of land and destroying homes. But it seems the volcano’s activity has actually returned to almost normal levels.

The United States Geological Survey said on Friday that the volcano had been quiet for more than a week….

The latest update from the Hawaiian Volcano Observatory said that the activity at the summit of the volcano was negligible with little deformation or seismicity. Down in the lower East Rift Zone, the LERZ, there was still some lava oozing out, according to the update, but it was a minimal amount and the laze plumes at the ocean entry point were small.

We wish the residents of Hawaii a speedy recovery from both disasters.

Hawaii’s tourism trade is trying to adjust to the second major national disaster it has faced this year, the first one being the eruption of Kilauea on the Big Island.

Second major natural disaster maybe, but here in NY we’re not much affected by it.

as if anyone with an IQ higher than their hat size gives a dead rat’s a55 about NY, or wants to visit there.

hurricanes are so rare in the Eastern Pacific that the National Hurricane Center gives them their own web page.

in fact there are two disturbances shown there now, each with a fair to middling chance of becoming a hurricane. even more unexpectedly, storms form there every year, El Nino or no, and have been for centuries.

but go ahead and lecture me on “climate change”, because i need a good laugh after reading the real news of the day.

Hurricane. At least it will cool down months of lava flows which turned half the Island into a smoldering parking lot. If a tsunami appears next, I’ll start to think the Lord is taking vengeance on the Hawaiians or something…

It is the third natural disaster this year, the second being the 50″ of rain in 24 hours that wiped out the north shore of Kauai. No one except residents living there before the storm allowed in even now.
That being said it is wet. Lots of moisture in this storm.

But it is just mother nature trying to cool off the volcano !