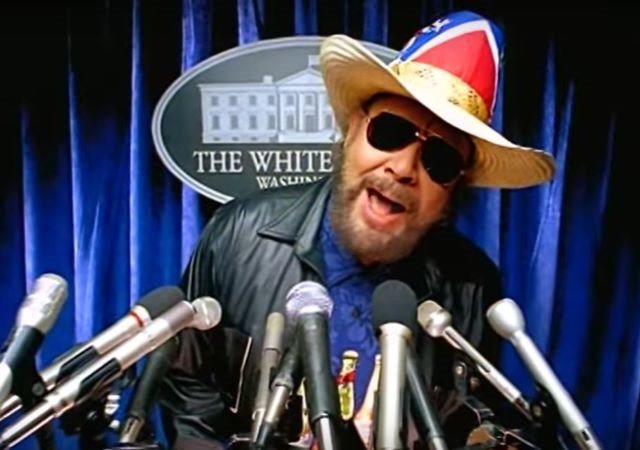 Comparing a sitting president to Hitler is the new normal.

Sarah Silverman unofficially kicked things off by dressing as Der Fuhrer on Conan O’Brien’s TBS couch two years ago to hammer home that ugly message. Since then, President Donald Trump has been called Hitler countless times by newspapers, pundits and especially celebrities.

That’s when stars aren’t comparing Trump to a murderer.

Comedy director Judd Apatow pushed further, saying we must end the debate because “Trump is a Nazi.”

Trump is a Nazi. We don’t need to dance around that any longer. He has decided to be open about it. https://t.co/C1lw8nWz5L

It wasn’t always this way.

In 2011, honkytonk crooner Hank Williams, Jr. learned the hard way that comparing a president to Hitler could cost you a plum gig.

The comparison was vile by sane standards. That single comment reverberated around the sports and entertainment world in short order. ESPN summarily canned Williams from his signature gig, warbling the theme song to “Monday Night Football.”

“While Hank Williams, Jr. is not an ESPN employee, we recognize that he is closely linked to our company through the open to Monday Night Football. We are extremely disappointed with his comments, and as a result we have decided to pull the open from tonight’s telecast,” ESPN said at the time.

Guess what happened next? Well, nothing.

Social media wasn’t as robust in 2011 as it is today. Still, the silence heard from the entertainment community was deafening. Williams’ comments were crude to the core. Did he really deserve to lose his job over them, even if the Hitler comparison was the lowest of blows?

It didn’t matter. He was gone. And his fellow entertainers didn’t lift a finger to get him the gig back.

Last year, ESPN had a change of heart. Six years after his abrupt firing Williams rejoined the “MNF” fold. That news brought little reflection to the entertainment community. Outrage, if any, proved modest.

Even Social Justice Warriors realized a six-year ban was enough.

Looking back at Williams’ punishment isn’t just a nostalgia trip. It’s a reminder of how fickle the Hollywood community can be about free speech.

The “Guardians of the Galaxy” cast may be rallying to save director James Gunn’s MCU career after rancid jokes he told on Twitter years ago resurfaced.

Yet the same stars stood down when Roseanne Barr lost her signature job for one flat-out awful Tweet. “Guardians” star Zoe Saldana actually joined the Twitter mob to make sure Barr’s gig got away.

Oh and make sure to let America know that emotional retribution is no longer main stream. We know where it hurts. Economic retribution is what we seek for justice. #BoycottRoseanne and its affiliates.

The Williams affair also reminds us today’s stars face zero consequence for comparing Trump to one of history’s greatest monsters. Silverman can get any job she pleases without worrying her Hitler shtick could get in the way. Louis CK may have started the “Trump is Hitler” ball rolling, but it took serial sexual harassment charges to kick him out of Hollywood.

Christian Toto is editor of the conservative entertainment site HollywoodInToto.com

But has there been any rodeo clowns wearing a Trump mask?

ESPN and the NFL don’t need to irritate any more of what is left of their audience.

And let’s not forget ‘G.W. Chimp’ and ‘bushitler’ along with the constant vomit of ‘assassination chic’ unleashed on GW Bush. Or ‘Sarah Palin is a c^nt’ T-shirts, and the witless Lopez twins calling her a ‘cabrona’ on national TV. Twice.

Ten years later, half the country are deplorable racists worthy of antifa violence, Trump is Hitler, Kathy Griffin ‘decapitates him’, and now she’s a victim or something.

Hank Jr’s kerfuffle is a bit of nostalgia, but it only serves to highlight Fenn’s Law: The left doesn’t truly believe the things they lecture about to the rest of us.

Pointing out the colossally blatant obligatory hypocrisy and pathological dishonesty of the inherently violent Left and their vast cabal of Fake News Network lapdogs is like pointing that the sun has risen at high noon.

they need to be made to pay: until they regret the “new rules”, by being held to their own standards, none of this will stop.

war to the knife, knife to the bone, and no quarter.

Gee, I thought comparing His Imperial Executiveness, Emperor Barak the Nonpareil to Hitler wasn’t anywhere near “vile”, “crude to the core” or “the lowest of blows”. But that’s just my NSHO informed by his eight years as Resident.