Amid Turkey’s Economic Meltdown, Erdogan Announces Boycott of US Goods

Amid Turkey’s Economic Meltdown, Erdogan Announces Boycott of US Goods

‘They have their dollars, we have our Allah,’ says Erdogan 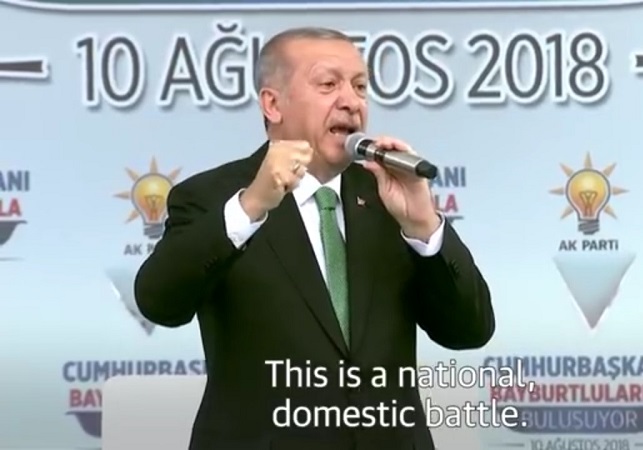 With the Turkish currency in free fall, President Recep Tayyip Erdogan has announced a boycott of US-made electronic goods. Showing defiance in the wake of the recent US sanctions imposed in a dispute over the detention of an American pastor, Erdogan accused US President Donald Trump of waging “economic warfare” against the country.

The Turkish lira lost almost 20 percent of its value over the last few days. Erdoğan urged Turkish citizens to “sell their savings in euros and dollars and buy lira” to help the faltering currency.

“If they [the US] have dollars, we too have our people, our Allah,” Erdogan said on Friday. He also accused the US of “trying to stab Turkey in the back.”

Earlier this month, the Trump administration raised tariffs on Turkish aluminum and steels, which triggered an economic crisis that had been in the making for some years. The measures taken by Trump may have precipitated the currency meltdown, but the crisis is rooted in the economic policies enacted by Erdogan, who’s Islamist AKP party has been running the country since 2002. “Fundamentally speaking, the reason for the Turkish meltdown is primarily a large current account deficit,” UK daily The Guardian reported.

I have just authorized a doubling of Tariffs on Steel and Aluminum with respect to Turkey as their currency, the Turkish Lira, slides rapidly downward against our very strong Dollar! Aluminum will now be 20% and Steel 50%. Our relations with Turkey are not good at this time!

Trump wants Turkey to release Pastor Andrew Brunson, who has been under detention in Turkey since October 2016 on false charges. Brunson, an evangelical Presbyterian missionary, was arrested during the nationwide arrests following a failed coup attempt. Turkey is also holding an additional 15 to 20 US-Turkish citizens on trumped-up charges while three local employees of the US Embassy remain in Turkish prisons.

Trump first tweeted about Brunson in April, saying, “Pastor Andrew Brunson, a fine gentleman and Christian leader in the United States, is on trial and being persecuted in Turkey for no reason.” In recent months, Vice President Mike Pence and Secretary of State Mike Pompeo, have joined the President in calling upon the Erdogan regime to release the US pastor or face “significant sanctions.”

The UK newspaper The Independent reported Erdogan’s response to the unfolding economic crisis:

Turkey’s president has blamed the crash of the lira on the United States, claiming a “political, underhand plot” had sent the value of his country’s currency tumbling to record lows.

Recep Tayyip Erdogan accused Donald Trump of waging “economic war against the entire world”, after the American leader escalated a diplomatic feud by doubling tariffs on steel and aluminium.

“The aim of the operation is to make Turkey surrender in all areas, from finance to politics,” the Turkish president told supporters in the Black Sea city of Trabzon.

“We are once again facing a political, underhand plot. With God’s permission we will overcome this.”

The lira has lost more than 40 per cent of its value against dollar this year, amid worsening ties between Turkey and the US and concerns over Mr Erdogan’s influence over the economy.

Amid worsening relations with Washington, there are signs that Erogan is now turning to Moscow. Turkish President called his Russian counterpart Vladimir Putin to discuss “trade and economic cooperation.”

The UK daily The Independent talked of a “new Turkey-Russia-Iran triumvirate,” claiming that the recent developments were “pushing Turkey into Putin’s embrace.”

Given Erdogan’s recent overtures to Russia and Iran, Trump is scaling down military cooperation with the country. Late Monday, Trump authorized a bill blocking the transfer of F-35 fighter jets to Ankara. The defense bill prohibits the sale of the aircraft if Ankara goes ahead with the plan to buy Russia’s S-400 air defense system. The Russian system, once operational in a NATO member state, can give Moscow crucial data on how to detect the US planes.

For years the Erdogan regime has been helping Iran evade US sanctions, media reports have suggested. Government ministers and members of Erdogan’s own family allegedly have links to Tehran’s money laundering operation.

The DC-based journal Foreign Policy, often critical of the Trump administration, ran the headline: “Trump Is the First President to Get Turkey Right.” The magazine blamed the Turkish regime of “complicating” the US fight against ISIS, and “undermining'”US policy by helping Tehran “evade sanctions.”

[T]he pressure that the Trump administration has brought to bear on Turkey is a welcome change from the passivity of the last two administrations, which preferred to overlook Turkey’s malign policies, either in an effort to try cajole Ankara to support the United States or because they did not want to risk a rift with a “strategic partner.” Not only did this approach not work, but it also sent the message to Ankara that it was so valuable an ally that there would be no consequences for its actions. [Foreign Policy; August 13, 2018]

The worsening economic crisis could also prompt Erdogan to double down on his repression of political opponents and  ethnic minorities. Media reports suggest that Turkish authorities have renewed their cracking down of critical social media accounts, blaming detractors of “undermining confidence” in the economy.

Erdogan’s belligerent actions indicate that economic woes may have further raised the fanaticism of the regime in Ankara.

I’ll take my dollars over their Allah any day of the week.

If you don’t shun the bully, he’ll keep on bullying. The tariffs seem to be a sad, logical reaction.

Erdoğan urged Turkish citizens to “sell their savings in euros and dollars and buy lira” to help the faltering currency.

And that’s exactly what people will do …NOT.
Anyone taking bets?

in fact, the foreign exchange markets are a great big running tally of all of the bets that everyone is making, in real time.

For all his threats, how much more badly could Erdogan treat us if he was an open enemy? For years, under both Obama and Bush, we’ve called countries “friends” even after they treat us worse than enemies would. (Hello, Pakistan!) So why have we put up with that? No more.

Now is the time to step on his face! He is a muslim caliphate wanna-be and it would be better for the world to crush him now before the other despots come to his aid. He is truly the modern version of Hitler and any encouragement will only make it worse for Turkey.

Not Hitler, but Mussolini… with enough power and resources to believe that he’s running a great power when in fact he’s running a paper tiger. What makes him dangerous is that he could show others who actually have more power (Russia or China) how far they can go in testing our resolve. Mussolini’s adventures in Ethiopia and in Spain’s civil war not only inspired Hitler but showed him that the great power of the time were not willing to stop him when they could.

Ah…he is behaving exactly as I thought he would be.

An intelligent person would have backed off but no, Sultan Erdogan’s ego won’t allow him to back out of this one.

So his answer is more crazy! HAHAHAHAHA. Yeah, like thats gonna be a long term winner for him.

Having traveled around the world, including Turkey on many occasions, it’s nice to know we now have a leader of the USA that will defend its citizens abroad.

They have their dollars, we have our Allah

Could be a problem . . . I don’t think Turkish currency says In Allah We Trust on it.

Do whatever it takes to bring them into submission. It’s time to stop treating moslems like spoiled rich kids who can’t be disciplined.

Turkish currency is in Free Fall.

Iranian currency is in Free Fall.

Would Russia really want a long term alignment with them?

And then there is Russia’s Islam problem.

Turkey also has an Islam problem. Islam doesn’t allow banks to charge interest on loans. Sharia banking is not a wild success.

Dont kid yourself. Islamic loans still charge interest, even if they claim they don’t.

Erdogan calls for a boycott of US goods? Well La Di Da!

Looks like a lot of Turkish rich kids are going to have to give up their I Phones.

Glad I didn’t buy the Canik.

No announcement if the nukes have been moved out of Turkey and into Britain, but I hope it was done. Turkey announced no US military were allowed to leave, but he is not in a position to enforce that and it is a breach of treaty to do so.

The relocation of the nukes has already been done. Right after “the Ottoman nutcase” cut of the airbase the first time.

The delivery systems have also been quietly relocated. The only things left are aircraft and personnel.

Not that they’re any safer from Islamic nut jobs in Britain. Just saying.

The Trump Doctrine: bomb their economies instead of their cities.

‘They have their dollars, we have our Allah,’ says Erdogan

“Erdogan accused US President Donald Trump of waging “economic warfare” against the country.”

Well, isn’t that what sanctions is all about? Hitting them economically to force their hand in place of using violence?

Seems pretty simple, release the American Pastor and it might mean those sanctions go away and your economic outlook improves.

Does this mean I have to give up dates?

Only with Turkish girls.

Muslim leaders NEVER admit to any flaws –
see the 70+ war on Jews in ME.

It’s about time the United States of America wields the economic sword against all comers.