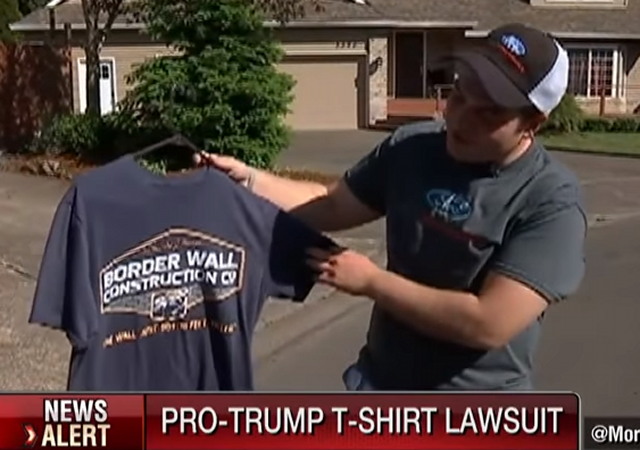 A student from Oregon named Addison Barnes sued his high school after being suspended for wearing a Trump-themed t-shirt featuring the words “Border Wall Construction Co.” The school just settled with him for a cool $25,000.

It all began back in May of this year.

A high school student in Hillsboro is suing the school district after he says his First Amendment rights were violated.

FOX 12 spoke with 18-year-old Liberty High School senior, Addison Barnes, who says he was asked to cover up a President Donald Trump shirt he was wearing or, instead, leave school.

Barnes says he knew what he was doing when he wore a controversial shirt to his “People and Politics” class, in which the topic that day was immigration.

He was sent home that day, on Jan. 19, when he refused to cover it up, and tells FOX 12 he’s sticking up for his First Amendment rights.

The shirt included the words “Donald J Trump Border Wall Construction Co.” and a quote from the president: “The wall just got 10 feet taller.”

Barnes says the assistant principal pulled him out of class because his shirt offended students and a teacher.

“She gave me the option; either I cover the shirt up or I get sent home,” he said.

An Oregon high school student who sued his school district after administrators said he couldn’t wear a pro-Trump border wall T-shirt will be given a written apology and $25,000 in a settlement…

Barnes sued his school, the Hillsboro School District and Principal Greg Timmons, claiming his First Amendment rights had been violated.

On Tuesday, Barnes’ lawyers announced they had reached a settlement with the district.

Timmons will write a letter of apology to Barnes, and the district will pay $25,000 to Barnes to cover his legal fees.

Barnes said in a statement that he brought the case “to stand up for myself and other students who might be afraid to express their right-of-center views.”

As an educational institution, Hillsboro School District and each of our schools supports, encourages, and celebrates free speech and reasoned debate. We also have a responsibility to ensure that each of our students feels welcome and safe in our schools so they can effectively learn. This was an instance where we were challenged to do both simultaneously and the decision landed on the side of ensuring student safety. Moving forward, we will continue to use professional discretion to meet both objectives and will actively seek ways to turn sensitive situations into learning opportunities.

Congratulations to Mr. Barnes on his win, which is also a victory for free speech.

… and the decision landed on the side of ensuring student safety.

A t-shirt presents a safety issue?

Is it poisonous? Explosive? Does it have sharp edges?

Or is it just free speech?

We may eventually have to come to terms with the fact that America isn’t for everybody, even some who happen to live here. Some people just don’t “get it” and probably never will.

You treat it as a safety issue when you think the students who would disagree with what it says might react violently.

So why wouldn’t removing the students with the propensity for reacting violently when confronted with an idea they did not like be the solution to the potential problem?

Because that would make entirely too much sense! 🙂

If students were allowed to react violently to anything they didn’t like, how many tests and how much homework do you think would get done? The whole situation is an educational experience for everyone involved, especially the ‘offended’ students and the administration.

unfortunately, too much of the left have bought into the notion that offensive language is the same as violence, and that their violence in response is simply speech.

Here, when the school speaks of a “safety issue” they mean the snowflakes should be safe from speech they don’t like.

I am ambivalent about this. Great a plus for free speech.
OTOH many will see it as a precedent for allowing T-shirts with obscene material on them or “hang Trump” t-shirts.

I’m a retired teacher, and I would have appreciated a dress code rule that prohibited all graphic tees. It was hard enough being the fashion police over whether a kid’s clothing adequately covered his or her body parts without also having to be an arbiter of good taste. Is “Physics never sucks. It pushes and pulls, but doesn’t suck” OK because it’s teaching something? How about “Silly Rabbit, Dix are for Chix” just parody or does it cross a line? I had so many more important things to do.

Over the years I’ve come to believe that the old Catholic schools had it right all along – uniforms for everyone. Then there’s no issue of new clothes, or old clothes, or trendy fashions, or junky tasteless clothes, or any of that nonsense that distracts from the job at hand. And there is NO discrimination because the absolute same rules apply to everyone, in advance.

Every penny given to Holy Family and Lasalle was well spent. I recently overheard a parent complaining to a grocery store manager about her middle school son being banned for shoplifting, which caused him embarrassment among his friends. Yeah, the store is the problem here lady.

It’s not a precedent, it’s well-settled law. Actual obscenity is not allowed, but anything short of that, and certainly anything expressing any kind of opinion on any subject, is protected speech (so long as it doesn’t contradict the school’s educational mission, e.g. by promoting criminal activity).

That’s why this incident was never newsworthy. It’s clear how this played out, and there was never any prospect of it going any other way. The assistant principal did a stupid thing, the kid complained, the school board consulted its lawyer, who immediately said “You did what? Settle this now and make sure your staff know not to ever do that again.”

I don’t always agree with milhouse on very much, but he is correct on this issue, so what’s up with the 4 thumbs down?

Is he? This isn’t an armband in a gen ed class, but specifically an on-point t-shirt in a class on politics. Sounds like any “disruption” caused would be de minimus or faux rage. I wouldn’t read existing SCOTUS precedents too broadly.

Yea, I don’t get that either. Maybe people skimmed the comment and didn’t get the point.

Oh change of heart? Now, you consider this ‘free speech’ story not ‘newsworthy?’

I say screw the written apology. The principal should have to appear on the evening news making a groveling apology about what an idiot he was trying to deny this student his 1st amendment rights.

A resignation would be nice as well.

There’s little danger of an actual apology, if that mealy-mouthed doubletalk in the Principal’s statement is any indication.

The principal should pay the settlement out of his own pocket.

I would NOT call that an apology.
‘Non-apology’ would be more accurate.

This kid ‘won’ because he fought back, but make no mistake, it most likely happened before, and will happen again.

Punch back twice as hard.

Mandatory Free Speech training for all teachers and administrators! Subject the trainees to numerous examples of leftist suppression of free speech, and require them to acknowledge that these things happened and were grossly wrong.

Also, personally sue the teachers and administators responsible. Leftists learn to refrain from thuggery only when made to suffer.

“In our system, state-operated schools may not be enclaves of totalitarianism. School officials do not possess absolute authority over their students. Students in school, as well as out of school, are “persons” under our Constitution. They are possessed of fundamental rights which the State must respect, just as they themselves must respect their obligations to the State. In our system, students may not be regarded as closed-circuit recipients of only that which the State chooses to communicate. They may not be confined to the expression of those sentiments that are officially approved. In the absence of a specific showing of constitutionally valid reasons to regulate their speech, students are entitled to freedom of expression of their views. As Judge Gewin, speaking for the Fifth Circuit, said, school officials cannot suppress “expressions of feelings with which they do not wish to contend.” Burnside v. Byars, supra, at 749.”
Tinker v. Des Moines, 1969

‘Liberty High School.’ There’s some brutal irony for ya.

From the WaPo: “In a statement, they noted that a third of the high school’s population is Hispanic and said, “Liberty High School administration believed they could reasonably forecast that Mr. Barnes’ shirt might cause other students to feel unsafe and could potentially lead to walkouts, altercations, or other disruptive actions.”

Good grief. Listen to the vile bigotry and disgusting prejudice burped out by the school administration against Hispanics.

IE: “Hey, we know you have brown skin and come from south of the border, so we figure ‘you people’ won’t support national sovereignty, or the rule of law, will naturally be intolerant, then turn into a rampaging mob.”

Is it time to ban government schools?

Time for a “Subduction leads to Orogeny” T-shirt to make an appearance. A twofer, both a cash-payout and the teacher gets to look really stupid.

But seriously, this was a perfect example of how an action was taken to defend the law-breakers. Hillsborough is like mini-California, a perfect blending of Fresno and Palo Alto. Too bad the Principal was just a petty bureaucrat and not a high-minded idealist like those 20 miles east in PDX. Then we would have had the full 3-rings and a huge payout. Smart lawyers take all the fun out of it.

While I support the kid in practice and in theory, this is a text book example of why school uniforms are a great idea. Express you opinions on your own time, you’re there to learn.

I feel similarly about professional football players protesting during National Anthems. Do it when you’re not on the clock.

“We also have a responsibility to ensure that each of our students feels welcome and safe in our schools so they can effectively learn. ”

You mean like huge numbers of illegals who are “offended” by a shirt that points them out for what they are, basically.

“As an educational institution, Hillsboro School District and each of our schools supports, encourages, and celebrates free speech and reasoned debate. We also have a responsibility to ensure that each of our students feels welcome and safe in our schools so they can effectively learn… ”

Don’t you love how these totalitarian but-monkeys express themselves in terms of non-existent vs. black letter law competing rights and then they the arrogate to themselves the exclusive power to arbitrate?