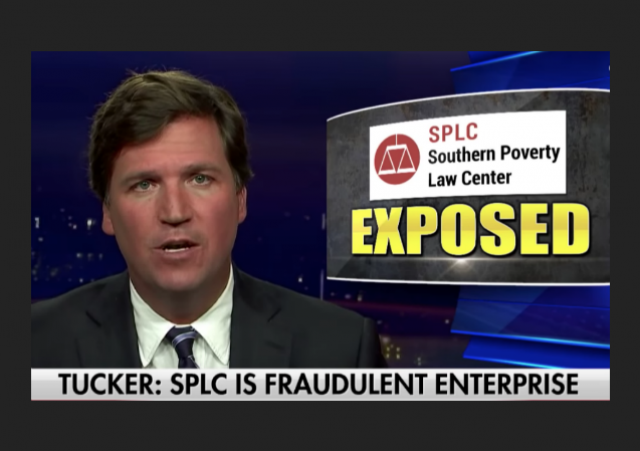 Several years ago, there was an outcry from the right about the FBI’s partnership with the Southern Poverty Law Center (SPLC).  At the time, it seemed that the relationship might have been severed; however, it apparently was not and, to date, has not been.

The story was broken by Tucker Carlson who alleges that there is an “ongoing” relationship between the FBI and SPLC.

The FBI has an “ongoing” relationship with the Southern Poverty Law Center (SPLC), a left-wing nonprofit that once placed Housing and Urban Development Secretary Dr. Ben Carson on an “extremist watch list.”

That’s according to an exclusive report from Fox News host and Daily Caller co-founder Tucker Carlson, who broke the news on his show “Tucker Carlson Tonight” Friday.

“Well as you already know if you’ve been paying any attention at all, the Southern Poverty Law Center is a fraudulent enterprise,” said Carlson. “It’s a left-wing political group that uses ‘hate crime’ designations to target its ideological enemies and to crush people.”

“The SPLC has repeatedly been allowed to brief the FBI on alleged domestic terrorist threats to this country,” Carlson reported. “Disturbingly though, the relationship is ongoing, if you can believe it.”

As of this writing, the FBI lists SPLC as among its Public Outreach partners; I added the yellow highlight.

Florida Congressman Gaetz has written a letter to the FBI demanding answers regarding its reported on-going partnership with SPLC.

A Republican lawmaker is demanding some answers from the FBI after he says the bureau admitted to working with the controversial Southern Poverty Law Center.

In a letter obtained by Fox News’ “Tucker Carlson Tonight,” Rep. Matt Gaetz, R-Fla., says the FBI has “admitted to working with the SPLC,” in a development he describes as “surprising and worrisome.”

“This is surprising and worrisome, as the SPLC is known to use its platform in order to denigrate and disparage certain groups by labeling them ‘hate groups,’” he said.

He said that groups such as the Christian Family Research Council (FRC) have been labeled a hate group, while members of “Antifa” — a broad collaboration of left-leaning, anti-fascist activists — have not been given such a label. He added that Floyd Corkins, who shot an FRC employee, later said he targeted the group as the SPLC had labeled it an antigay group.

Department of Justice spokeswoman Sarah Isgur Flores told Fox News that the “Attorney General has directed the FBI to reevaluate their relationships with groups like this to ensure the FBI does not partner with any group that discriminates.”

We do not, at this time, know any details about the reported relationship between the FBI and the SPLC.  We will provide updates as more is learned.

IIRC the relationship goes back to the Clinton administration and the SPLC was widely touted to state and local law enforcement as a “go to” source for information on domestic “terrorists and terrorism”. Needless to say the arrangement brought Federal, state and local tax dollars into the SPLC coffers (their “services” weren’t “gratis”)
.

notamemberofanyorganizedpolicital in reply to Edward. | July 30, 2018 at 2:20 pm

SPLC is a terrorist-hate group imo.

There’s a huge difference between ‘indiscriminate’ and ‘discriminates’.

The latter is required for reasonable & serious vetting. The former is egregious political partisanship.

Let’s save everyone a whole lot of time and rename the agency FIB.

Since my itty bitty archery club in Texas is on their targeted list, I take exception to anyone who considers them a legit source for anything.

What is their reasoning for listing your club?

This all happened during the Antifa crap last year attacking statues. The name of a Confederate General is prominent on the front gate of the public park where we “office” and have our range. The property is remote and difficult to locate unless you know where you’re going. SPLC had made a random list of anything with a Confederate related name on it and our name got added.

Right before Christmas someone climbed our gate and hung a Confederate Flag on our pole. Fortunately, one of our members leases the grazing on the park and was out making rounds before full light, saw it and called the Sheriff. He removed the flag and made a trespassing report.

Imagine his surprise when a Dallas news crew showed up in the 1 horse town looking for it…. they claimed they had gotten a call from “outraged citizens” (from a town with 212 people in it) but wouldn’t provide any details. He just played dumb and told them to “have a look around”. They tried to interview some people at the Dairy Queen but ended up getting a lot of blank stares.

I find it so disturbing how the FBI has become so undeniably political, and things such as this shows it has been building for a long time. I don’t think this is something that can fixed and repaired quickly. Comey, Mueller, Strzok, McCabe, who are immediately involved with the whole coup attempt, and are only the tip of the iceberg. How much more can we expect to learn as the days go on?

They have questionable ties to Hillary and Bubba Clinton, recall all those FBI files Hillary had… so this is systemic, and their actions with the FISA warrant and efforts to disrupt Trump and attempting to remove him from office, along with Brennan, well, can it be fixed? Can the trashed reputation from all this, other than leftists who think having their own stasi seems fine, ever be rebuilt?

Why does the DOJ have an AG that seems to do nothing but weakly react and then only when caught? Otherwise, AWOL is the norm.

Trump has strong leaders elsewhere. What is going on with the DOJ and the FBI?

I think Trump has concerns about how it would appear if he fired Sessions. Just as it would be if he fired Rosenstein and Mueller, the media would act as if the replacing of Sessions was the end of the world, they would say it points to his guilt rather than for reason of non-performance of the job.

Maybe some things are being done by Sessions, work to dismantle the leftists control of our Intelligence agencies, that are not being reported and not known to the various leakers in Trump’s administration. I just don’t see him as being the right person for this job, but Trump apparently has his reasons for not getting rid of him/them.

Ask the Senate Republicans, Tex. Trump has been in office for nearly two years and McConnell et al have been allowing the Dems to delay and delay his appointees. He still doesn’t have a Deputy Assistant Attorney General for the Criminal Division or the Civil Rights Division. So those slots are filled by Acting Assistant Attorneys General, i.e. Obama holdovers.

This isn’t the only country with a deep state, i.e. a deeply entrenched administrative/regulatory state. I saw it at work in Japan. When I was assigned to Commander Naval Forces Japan I was a liaison officer to the Japanese Maritime Self Defense Force and would often go to Tokyo for meetings at the Boecho, their version of the Pentagon. Naturally, a million other things were going on as well, and sometimes I would be there when the Minister of Defense and his minders would be out and about for some function or another. Did the bureaucrats suck up to the Minister of Defense? No, he was just a politician in the Prime Minister’s cabinet, a relatively junior one at that, and politicians come and go. But they sucked up to his assistant as he was a career bureaucrat and that was where the real power lay. In fact, the bureaucrats have on several occasions (not well documented at the time but the facts came out later) decided to take down governments if they disapproved of their policies. Which is a lot easier in a parliamentary system. Mueller didn’t invent the political witch hunt; the Japanese deep state has been doing it since the late 1940s even under the American occupation.

Trump doesn’t really have a free hand, and I could make the case that it’s better to stick with Sessions for now as half of something is better than worse than nothing.

‘We don’t know.’ Boy, if that isn’t the story of our FBI as it currently exists. To quote Hogan’s Heros (yes I am that old) “I know nothing.”

Equating the FBI with Sgt. Schultz (played by John Banner) is an insult to Sgt. Schultz and all of the other stupid sitcom characters.

Anyone heard if the Muslim Brotherhood still has a say in how the Feds investigate domestic terrorism?

It’s questions like that that get your archery club on the SPLC’s list of hate groups. That and your use of bows and arrows – a straight-up case of cultural appropriation!