#FamiliesBelongTogether is an excuse for cosplay, drama, and Trump Derangement Syndrome

#FamiliesBelongTogether is an excuse for cosplay, drama, and Trump Derangement Syndrome

Good policy must be based on more than great costumes. 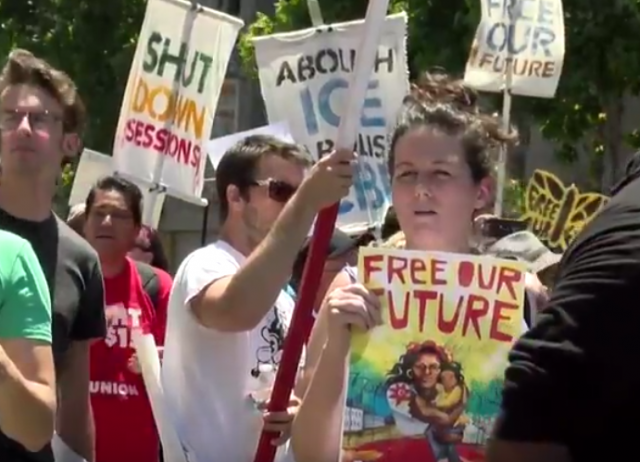 My colleague Fuzzy Slippers covered the national “Families Belong Together” rallies held this weekend.
In my hometown of San Diego, we were treated to a march today that began in Chicano Park and ended at the Federal Building.

An estimated 800 people first gathered at Chicano Park around 9 a.m. before marching downtown. Many of the protesters held signs calling for the abolishment of U.S. Immigration and Customs Enforcement.

“I can’t imagine the suffering of people who don’t have their child with them,” said marcher Maythe Figueroa as she held her sleeping one year old, Esmerelda. “I am blessed to be here and if there is a little bit that I can do to make a difference I will do whatever it takes.”

A national group called Mijente organized Monday’s events. The group mobilized under former President Barack Obama to protest high numbers of deportations then. Mijente Director Marisa Franco said the group aims to support activists of color and those who are in the country illegally.

“Some of the messaging we’ve seen is, ‘This is not who we are,’ and people being really alarmed at family separation. And I think for people who are separated from their family members or have that in their history, that’s really painful, because it’s not acknowledging that that has happened and continues to happen,” she said.

Several aspects this inanity have galled me. First, President Trump’s executive order has eliminated the supposed reason for these events, as the children will no longer be separated at the border. So, these events are nothing more than one, giant, virtue-signaling, Trump-Derangement-Syndrome-based drama.

Tucsonans add their voices to the thousands marching in San Diego to protest the kickoff of Operation Streamline in CA.

The initiative takes what has been a misdemeanor (like a speeding ticket), and criminalizes it while fast tracking prosecution & deportation#FreeOurFuture pic.twitter.com/KmYDIbJahA

The movement message, This is not who we are, seems like an Obamaism. And one of the groups has had a history with the former President.

The elite media has been attempting to portray the former President as enjoying a quiet life of world travel, memoir writing, and raising his daughters. The New York Post’s Paul Sperry shows that this is #FakeNews.

From his sprawling DC office not far from the White House, where he oversees a full-time staff of 20, Obama has held regular meetings with Democratic lawmakers, as well as DNC chief Tom Perez, whom he personally helped install to run the Democratic Party. Obama has also met with his attorney general, Eric Holder, to craft a strategy to redraw congressional district maps in Democrats’ favor, according to Politico. Holder now runs the National Democratic Redistricting Committee, which Obama helped his old friend launch.

…That nonprofit — Organizing for Action — is not exactly a household name. But it is no less than the organizing and training hub of the anti-Trump resistance.

Most recently, OFA helped stage rallies across the country against the administration’s border policies, which it has decried as “cruel and inhumane.” OFA describes itself as a “nonpartisan grass-roots-driven organization,” but it clearly has a pro-Obama agenda. In fact, it’s run almost entirely by alums from Obama’s campaign and White House, including Jon Carson and Jim Messina, who co-chair the group, and Katie Hogan, who serves as its executive director, according to recent tax filings by the nonprofit.

I believe that Obama may be trying to stage a Tea Party-like movement against President Trump…perhaps in retribution for the Tea Party rallies in 2009.

The latest target of social justice ire is Immigration and Customs Enforcement, which opened in 2003 and was formed in response to the 9-11 attacks that were conducted by terrorists in this country illegally. ICE is responsible for identifying and eliminating border, economic, transportation, and infrastructure security vulnerabilities.

The roundup of MS-13 gang members, whose crime and violence impact Hispanic communities significant, may be a key reason President Trump’s approval among the group has jumped 10%. Subsequently, the leftists would like end Trump’s abilities to use this agency.

President Trump has used the #Resistance to his advantage, as now he has leftists openly decrying programs and agencies that were specifically designed to keep Americans safe. And as good as their costumes may be, they are no replacement for sound policy.

Well organized and funded groups understand that the spectacle is vital to get more attention. Whether in costume or language or both. More spectacle, more press.

Where is all the sympathy for kids of divorce and unknown baby daddies? Many more of them than illegal immigrants being processed for deportation.

notamemberofanyorganizedpolicital in reply to gbear. | July 3, 2018 at 3:14 pm

You never heard the Democrat Party say that ever!
RE: FamiliesBelongTogether

So I don’t believe them now!

In 2011, there were at least 5,000 children in state custody or foster care because an undocumented parent or parents has been deported, according to a study released by the Applied Research Center, a New York-based think tank that focuses on racial and social justice issues. Some estimates put that figure even higher today. Immigration and Customs Enforcement sent mandatory reports to the Senate that among other things revealed that during 2013, the agency deported 72,410 people who told federal authorities they have one or more U.S. citizen children.

So “separating families” was not at all a bad thing for the left and the obama administration, not long ago. They even bragged about it!
We are talking permanent family separations. We are talking about taking children away from their parents, putting the children in foster care and deporting the parents.

Revoke citizenship for the children and send them back. Mexico can reunite them with their parents.

Lots of countries have revoked birth right citizenship. It’s about a hundred years past time we do the same.

Citizenship or no citizenship, children should remain with their parents.
The right thing to do is to send the kids with their parents to whatever country they came from, but the US government takes the kids away and puts them into foster care. And there are other examples, of US government separating children from their parents.
I believe that’s WRONG in most cases, but I also believe it’s very hypocritical to criticize the practice now if they found nothing wrong with it when done by their messiah.

The Commie Libs sure are colorful when they take to the streets. They don’t have to make sense.

By all means let’s celebrate Mayan culture and its rich blood soaked tradition of human sacrifice.

With illegals becoming the new sacrifices.

Meanwhile an appointee of His Imperial Executiveness has issued an order that ICE immediately release or grant hearings to over 1000 asylum seekers, some of whom have been jailed for up to two years (I didn’t know Trump has been in office that long). Judge Boasberg cited a 2009 policy that asylum seekers who have passed initial screening have a hearing within seven (7) days or be released pending a hearing (I’ve heard of that before, haven’t I?).

The obvious answer, to concerns that such aliens have been coached in what answers to give which will get them past the initial screening, is to deny all and remove them from the country. Let Obrador decide what to do with those whom he claims have a “human right” to emigrate to the US.

Speaking of Obrador, heard this morning someone opining that if he really believes his campaign rhetoric about emigration to the US, his term in office might be the single biggest factor in getting the wall built.

“His Imperial Executiveness”? Sorry to inform you that Obama is no longer in office.

Every single day in America, children are torn from their parent’s arms screaming and crying and nobody protests this travesty. I’m talking about mothers and fathers committing crimes or suffering opiod addiction and being thrown into jail or treatment centers. Should jails be equipped with family facilities? Heck no!

This is just one more example of protected classes (Muslims, illegal immigrants) being given special treatment not afforded to citizens and immigrants that do everything right.

There is absolutely no reason why somebody doing everything wrong should be rewarded merely because they choose to put their young children in danger.

It’s okay to feel bad for the children but it starts with their parents and their decisions.

Immigration authorities in the UK also separate families when they are placed in detention for illegal immigration. Where is the outrage there?

The Hollywood set is in danger of losing their house elves.

I believe one of these “protests” was held in Frederick MD on Saturday. It was in the parking lot of a local strip mall and grocery store. What I saw were commercial entities selling pre-pay cell phones, trinkets, and food. There was a stage where some band was playing and every now and then someone would speak Spanish into the microphone. There were young Senoritas dressed up with Castanets clicking away. There were the typical signs in English saying that no one was illegal and the children belong to all of us and such.
All in all there seemed to be about 50 – 60 people there. BTW, there was plenty of room in the parking lot for the cars.

Don’t want to risk being separated from your children? Then don’t bring or send your children to cross the U.S. border illegally.

If you choose to violate our laws, be prepared to face the consequences.

We have (at least for now) the rule of law in the U.S., because That’s Who We Are!

Explain again how savages wearing feathers and warpaint declaring they are going to take over my country are not invading.

As you have noted, this is all theater. It is not a real issue. All of this is fake outrage. It is nothing more than a phony reality show, The Crazed Wienies of Open Borders. And the media laps it up.

Those that would destroy this country are on the ropes. They have no substantive issues left to present. They are desperate. And, that desperation is showing. These “demonstrations” have no real impact on our elected officials, public policy or the opinions of most Americans. They amount to nothing. However, as these “demonstrations” which are designed to appeal to “compassion” fail, the left will increasingly switch to those acts which will generate fear. These will always involve violence. So, ignore them and watch for the real dangers out there. They are coming to a citiy near you this summer.

I wonder how do I go about signing up for one of these rent a mob protests and how much I will get paid for it. Of course I’d just sit in the shade, carry no signs or wear feathers, but why not collect some funds for the thrill of being part of an authentic phony protest?

The same people involved in these events are the same as the “Occupy wallstreet” idiots back then, the same group of people, they just change the signs and go protest.

You can find the information on “Craigslist.org” under jobs, usually political or activism.