Reines insists he didn’t mean anything sinister with his tweet.

The owner, Nick Cooke, had the audacity to call the police when a woman harassed President Donald Trump’s former advisor Steve Bannon and called him a “piece of trash.”

Cooke spoke to The Richmond Times-Dispatch about the incident:

“Steve Bannon was simply standing, looking at books, minding his own business. I asked her to leave, and she wouldn’t. And I said, ‘I’m going to call the police if you don’t,’ and I went to call the police and she left,” Cooke said. “And that’s the end of the story.”

The Richmond Police Department confirmed a call was made around 3:15 p.m. Saturday for a report of someone yelling at a political figure in the bookstore and that the call was canceled before any officers responded.

“We are a bookshop. Bookshops are all about ideas and tolerating different opinions and not about verbally assaulting somebody, which is what was happening,” Cooke said.

Considering the ruckus the left has caused out in public against those in the government and Trump’s administration, can you blame Cooke for doing this? I can’t!

I guess those on the left want to take every opportunity to destroy anyone who interferes with their agenda. Remember, Rep. Maxine Waters (D-CA) encouraged people to harass and target officials in public.

A woman saw Steve Bannon in a VA book store. She took the opportunity to call him a “piece of trash.”

Look at what has been happening to non-leftists these past couple of weeks. The first thing that went through my head is that Reines pulled a Maxine Waters, but did so with vague language.

I’m not the only who thought so.

If there’s a confrontation in your store, you call the police so that it either stops the confrontation from escalating or it gets something with authority to make sure it ends.

That you are calling for a public beatdown of this place by posting all of their info is disgraceful.

Reines insists he didn’t want people to harass the bookstore owner or protest. No, he just wants dialogue.

I’m providing a service to the public by providing the contact information the bookstore posted on their website – presumably with the hope of being contacted. I presented facts w/o encouraging any behavior.

I’d point out through it’s possible this woman stopped a book burning. pic.twitter.com/ofDi2aA3tM 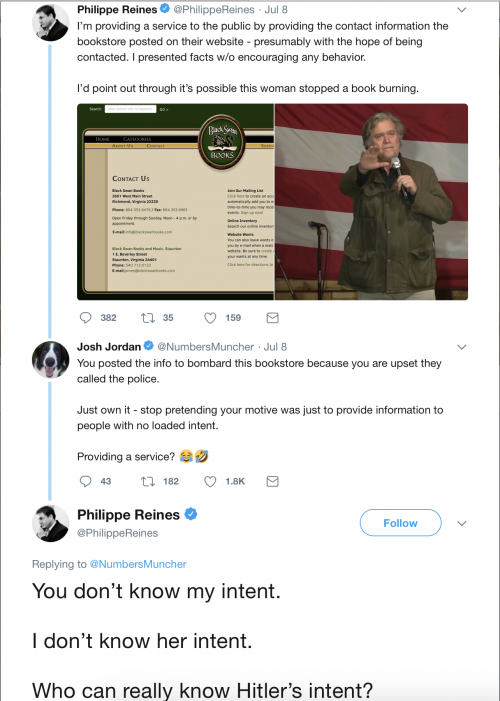 Ok, bro. Whatever you say. Of course he brings up Hitler. I’d also like to inform Reines that Hitler never masked his intent. Everyone knew Hitler wanted a Jew-free world and Aryan domination. Not exactly a secret, dude.

The bookstore that Steven Bannon was yelled at inside was Black Swan Books. First, that’s an incredible name for the book store where Bannon would hang out. Second, between this and Red Hen, conservatives should just learn to avoid colorful bird businesses.

Dangerous times to be anything other than a lefty liberal fuckwit.

And they cannot conceive of there ever being a time when it becomes dangerous to be a “lefty liberal fuckwit”. There are none so blind as those who will not see.

Why did Hillary surround herself with such silly jerkmeats?

They’re both apples from the same political tree

And to think that we ducked this dipstick from being chief of staff to Felonia von Pantsuit who this evening would be announcing her second SCOTUS pick.
There is a God if you ever had a doubt.

Sometime you just have to wonder what is old Philippe’s address.

That is the only thing that will stop crap like this. Saul would say freeze them in place.

As much as I hate it, exposing the left to the same treatment is the only way to keep this crap from reaching the violent stage. I heard one Repub say today that if they do this to him they had better be prepared for combat. This dickwad’s address and phone numbers should be made public. And the threat made that it will happen every time they attack any of us.

She possibly stopped a book burning? Seriously? Does Reines know that Bannon is no longer part of the Trump administration? So whose book was going to be burned? Bannon’s? He was at a book store to buy a book so he could torch it? Wouldn’t it have been quicker just to set his wallet on fire?

If you’re going to act like a fascist thug and encourage other leftist loons to do the same Reines, at least come up with some rationalizations for your thuggery that make sense. This attempt was beyond pathetic.

So much this. It pained me to vote for Donald Trump. But, boy howdy, am I glad that I did.

I think it is time to stop referring to the euphemistic and vague label “leftists.” The people involved in provoking violence against citizens of these United States are fairly highly placed members of the Democratic Party. I find this state of affair scandalous.

It was one thing when David Duke embarrassed the living hell out of the Republican Party by getting his name on a ballot as a Republican: it is entirely different to have a Democrat in good standing in the party such as Maxine Waters or Elizabeth Warren or Loretta Lynch calling for violence.

And the DNC playbook had a page devoted to provoking violence and blaming it on the Repubs.

And Project Veritas got film of Clinton campaign staff bragging about getting vulnerable people to attack Republicans.

Reines was a member of a Presidential election campaign in the United States. What on earth does he think he is doing, by tweeting out information for the purpose of getting violence committed against a political figure?

I submit he is merely continuing the behavior of the DNC and the Clinton Campaign. That is unacceptable.

Either the Democratic Party cleans house and gets serious about policy questions, or it will be replaced by some other party, completely. Democratic voters do not approve of this nonsense, hence the rapidly growing #walkaway movement.

One of the things I really like about ordinary voters is their sense of justice and fair play. They are offended by mistreatment of others, even others they disagree with.

you are obviously NOT familiar with the voters here in #Failifornia…

or, for that matter, the voters who attended the Inauguration riots, the Berzerkley riots, or those in Portland, Seattle, etc, etc, etc…

Valerie, is that actually a cause of the WalkAway movement? I admit to ignorance here, I thought they were displeased that the Democrats werent taking more “direct action”, not over disgust at these attempts to intimidate via threats of force.

If you could point me towards some evidence supporting your pov, I’ll happily stand corrected. Not trying to put you on the spot or anything bad faith, just genuinely curious. If true, it’s a good sign. For everyone.

And I’ve grown so cynical. I think the FBI corruption was the final straw. Throw me a lifeline 😉

Doxing to gin up a mob for political retribution, possibly fantasizing they will be punished with violence.

Milhouse? Where are you? Do you support this? No? Will your judgement be consistent if our side responded in kind?

Should this stop before shots are fired again (Congress softball practice). How should it be stopped?

It’s perfectly legal for anyone to do this.

Isn’t it about time that the law looked a little deeper at the surreptitious “call to arms” which could be be inflammatory given the current state of affairs in the US?

My judgment is always consistent, unlike your own. A judgment that changes depending whose ox is gored is worthless.

Sadly no, it’s not consistent. That’s how someone as seemingly reasonable and intelligent as yourself got on my radar to begin with.

You made grudgingly valid points in defense of the Left, but somehow couldn’t bear to apply those same standards to the Right.

People all through this thread have expressed “fantasy” rhetoric that the Bully be subjected to his own medicine. I think the only reason you haven’t jumped their shit about it is because I spotlighted your inconsistency.

I notice you defended the Clinton cronny on sound legal grounds, but remain mum on the ethical and moral dimensions. Why? Cat got your tongue? Would you like an opportunity to revise and extend your remarks? Here it is.

Milhouse, can you not even entertain the possibility that perhaps you just played Devil’s Advocate to a fault? That maybe you have a blind spot and need a bit of criticism to recenter yourself?

I don’t have any animus towards you, it’s really not personal. And I think many here would appreciate you applying that intelligence and precision in defense of conservatives et Al bit more often.

Remember what C.S. Lewis advised, the need for a long spoon when sharing supper across from the Devil. You aren’t an emotional creature, so I’ll leave you be for now in the hope that you come to see my objections are not totally without merit.

If it’s public information there was no need for him to post it on Twitter, was there?

I believe it was what Americans call “a dog whistle”.
Correct me if I’m wrong.

You could make us wear a symbol, like a star, to make it easier for Gestapo types to identify and sort us, yes?

Or maybe get us tattooed?

Of course he didn’t mean anything sinister to happen. If something unfortunate happens as a result, well, that’s just unfortunate. Nothing to do with him or his tweet.

Can no one rid me of this troublesome priest? It’s not like that at all.

Deranged juvenile has been.

And if you can’t make it there, here’s a great idea from a commenter over at Victory Girls blog:

“I sent the bookstore a note (based on their contact page) saying thank you for being normal. I might even look up the place if I’m in Richmond.”

The owner is apparently left wing, but an old school liberal of the “I may disagree but will defend your right to speak” type.

Take 5 mins of your day to mail him a thank you for his civility and integrity. He’s likely being treated as a heretic by the activists in his party.

Turn the Clinton Crony’s veiled attempt at political retribution into something positive.

This is an excellent suggestion, Fen.

Thanks. I’m good for one idea a month. Which means I’m done early!

See you all in August ha