Can Democrats retake the House? 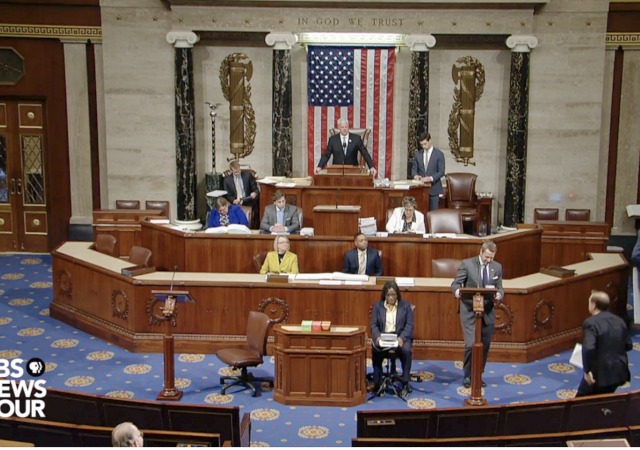 Yesterday I blogged on the latest Axios poll on a few Senate races, which show that the Democrats face losing seats in the chamber.

The opposite has happened in House races as The Cook Political Report changed ratings in 10 races and seven of those moves favor the Democrats. The publication’s monthly review also revealed that Democrats have a slight edge to win the 23 states they need to take over the House.

This district went from Lean Democrat to Likely Democrat mainly because of the fiasco within the GOP primary that will take place on August 28:

Cook Political Report wrote that even though Trump won the district by one percentage point in November 2016, Democratic Rep. Tom O’Hallerann fits the district perfectly. He was a moderate Republican when he served in the state’s legislature and is now a Blue Dog Democrat in Congress.

In March, O’Halleron became the chair of the Blue Dog’s Special Task Force on Rural America, which is a “working group aimed at promoting bipartisan policies – largely economic.”

Research in April showed that O’Halleran voted with Trump’s White House 10 out of 11 times in the first three months of 2018.

This district is now Solid Democratic. Its Democratic Rep. Kyrsten Sinema has the numbers to take over Republican Sen. Jeff Flake’s seat and her seat will likely stay Democrat. Failed Democratic presidential candidate Hillary Clinton blew Trump out of the water in this district in 2016, 54% to 38%.

The Democrats want a Blue Dog, but cannot find anyone worthy since Tipton took out moderate John Salazar in 2010.

Tipton will run against Democratic state Rep. Diane Mitsch Bush. The report said she has tried to appeal “her ranch conservation efforts” to the conservatives, but it may not be enough.

It looks like the report changed the rating because Tipton won the seat in 2016 even though he “didn’t crack 55 percent.” A Public Policy Polling memo in May revealed that Tipton’s vote on an Obamacare repeal has harmed him in his district. Plus only 32% of those surveyed approve of Tipton’s job performance while 44% disapprove.

Trump won this district with 52% of the votes.

The August 14 Democratic primary is a two-way race between former Simsbury First Selectman (mayor) Mary Glassman and 2016 National Teacher of the Year Jahana Hayes, who was encouraged by Sen. Chris Murphy to run. It’s a battle of experience versus a powerful personal narrative.

Glassman is regarded as the “establishment” pick: she was a top aide to state House Speaker Moira Lyons and ran for lieutenant governor in 2006 and 2010. In May, she narrowly won the party convention endorsement by running on experience. Hayes, who grew up in public housing projects in Waterbury and was a single mother, is running as the progressive and has Sen. Kamala Harris’ endorsement.

The Axios poll from yesterday sparked a fascination with Montana politics inside me. Trump won the state by a large margin, but the state also elected a Democrat governor in 2016. Sen. Jon Tester (D) has a double digit lead over his GOP opponent and the state’s other senator is a Republican.

Monatana’s lone House representative is Republican Greg Gianforte. For awhile, the state had a rating of Likely Republican, but now it’s changed to Lean Republican.

Gianforte won the special election in May 2017 even after he assaulted a reporter, an incident that Gianforte pleaded guilty to misdemeanor assault. Granted, most of those votes came before the election.

He will face off against Democratic state Rep. Kathleen Williams in November. Polls have her up 49% to 43%. If she wins, it’s an upset because the Democrats have not held that seat in 22 years.

His opponent, Erie attorney Ron DiNicola, has received a warm welcome to the race: “he took 49 percent of the vote here in 1996, nearly beating then-GOP Rep. Phil English. DiNicola, a former Marine Corps boxer, served as Muhammad Ali’s personal attorney for several decades and has most recently served on the board of a non-profit geared towards establishing a community college in Erie.”

It’s not a slam dunk for the Democrat since polls have shown Kelly with the lead.

I blogged on Sunday about Cook Report’s changing of Republican Rep. David Brat’s Virginia district to Toss-Up from Lean Republican.

Trump barely won the district in 2016 and a Quinnipiac poll revealed “that by a margin of 53% to 39%, Virginians want Democrats controlling the House.”

Support House races in other states.

Monetary donations from out of district are what has ruined Congressional elections. Support the candidate in your district that you like and let the chips fall where they may. I used to get so many mailers for McCain’s senate race after he ran for president in 2008. Whether he win’s his seat or not is none of my business.

Given McCain’s thumbs down on the supposed Repeal of Obamacare, underscores the fact that you most definitely MUST care what politicians get elected in other states whether you like it or not.

How anyone in this day and age would ever consider voting for a Democrat and handing them any power over their lives is beyond me.

The influence of our government funded and union managed Education Industry.

Well the real purpose of government is to support Drug Cartels and make Black Market abortions the only ones available.

I always liked Black Market weddings. Bootleggers and Baptists together at last. Or is that “as usual” ?

How much have you had to drink?

That’s when they Talk Tough And Carry A Big Stick.

the only polls that really matter are the ones that open and close on the first Tuesday in November.

the rest of it is just gas-lighting…

Really. Find me a poll that shows massive GOP turnout and gains. Show me a poll that does the opposite of what all polls always do the last 18 years… pump up Democrats and over-represent Democrats. You will never find one… ever. Because the reason for these places to exist is: to shape election year narratives and drive news coverage… in favor of Democrats and driving Democrat turnout.

I actually have watched polling for decades and hold a BS in Statitics and Mathematics and I can tell you from watching polling and the Cook Report you will NEVER see Charlie Cook and the gang do anything but help the Democrats with fundraising by predicting they can win the election EVER!!!!!!!!!!

I predicted Trump would win and got every state right but Wisconsin. That is 49 out of 50 and I even told my sister that Pennsylvania will put him over the top.

I can’t think of a result that wasn’t 7 points higher for Republicans than these pollsters had in July.

You will not see the Republicans overcome the media advantage for the Democrats till way after Labor day.

The fact the media coverage is 90% negative for Trump and they have small leads means they are actually in BIG trouble once campaigning begins.

Just remember Cook was WAY off on the 2016 election (Had Trump at 214 EV versus the 304 he turned out getting). It also got the Brexit vote wrong and so on.

Pollsters like Las Vegas “Odds Makers” live and die by the accuracy of their predictions. Cook’s Political Report should have died a long time ago especially after its November 2016 Prediciton: https://www.cookpolitical.com/presidential/charts/scorecard

And then there is this: Most folks don’t tell complete strangers their business and more likely than not, will have a little fun with any who call by telling them BS. I haven’t recieved the first call from a pollster in over 40 years, but know exactly what to tell them if they do: Hillary Clinton by a landslide.

I predicted it 7 years ago
http://www.americanthinker.com/2011/09/the_democrats_2012_victory_plan.html

Currently support for full legalization is above 60% and for medical well above 70%. And those numbers keep increasing.

I’d hate to see a repeat of 1932 where Republicans were the last supporters of Alcohol Prohibition. That helped get us FDR.

Overconfidence is a killer, we seem to be getting lazy. We can win this, but only by swinging and bringing more votes to the polls. That’s

@Msimon
That would be a great issue for us, and handing out free weed on November 3rd and fourth would be even better. Lots more of them than us would prefer to get stoned.
Later on, we could add a drug test at the polls. Seems perfectly straight to me, if you’re not in your right mind, then you are not capable of voting, If you a habitual druggie, there’s probably 100 good reasons why you shouldn’t vote.

I think if alcohol was added to the mix it would be fairer.

But what ever your “solution” prohibition is coming to an end.

It would be unfortunate to get caught on the wrong side of that end as happened in 1932.

But perhaps you have an answer to this.

Explain to me why the Republican solution to problems is first of all “we need a government program” ?

And second off why do the programs usually involve creating a Black Market?

Which is to say “Why are Republicans socialists?

And why are the recipients of their socialism criminals?

“Explain to me why the Republican solution to problems is first of all “we need a government program” ?”

Have you ever even been to the US?

You don’t even know who the players are, or what they fight for.