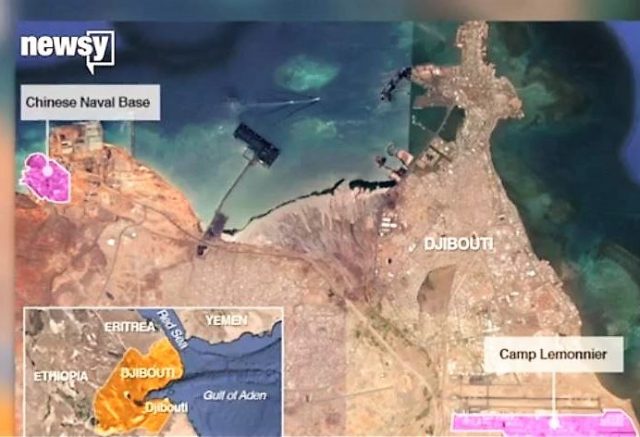 The American relationship with China certainly is complex.

The Asian powerhouse is assisting the US with negotiations with North Korea. However, at the same time, the American government has formally complained to China about an incident involving the Chinese military targeting American military pilots with lasers in the African nation of Djibouti.

Pentagon spokeswoman Dana W. White said at a briefing on Thursday that the United States has requested China investigate incidents in recent weeks in which U.S. aircraft in Djibouti have been affected by unauthorized Chinese laser activity.

White said the Pentagon was confident that Chinese nationals were responsible. She said there had been more than two but fewer than 10 such incidents, which she said had increased in frequency in recent weeks.

Back in 2017, China began constructing its first overseas military base in Djbouti, a few miles from Camp Lemonnier and one of the Pentagon’s largest foreign installations and critical it its War on Terror.

“It’s like having a rival football team using an adjacent practice field,” said Gabriel Collins, an expert on the Chinese military and a founder of the analysis portal China SignPost. “They can scope out some of your plays. On the other hand, the scouting opportunity goes both ways.”

Established after the terror attacks of Sept. 11, 2001, Camp Lemonnier is home to 4,000 personnel. Some are involved in highly secretive missions, including targeted drone killings in the Middle East and the Horn of Africa, and the raid last month in Yemen that left a member of the Navy SEALs dead. The base, which is run by the Navy and abuts Djibouti’s international airport, is the only permanent American military installation in Africa.

Beyond surveillance concerns, United States officials, citing the billions of dollars in Chinese loans to Djibouti’s heavily indebted government, wonder about the long-term durability of an alliance that has served Washington well in its global fight against Islamic extremism.

The Chinese are denying that the laser incidents occurred.

Chinese Foreign Ministry spokeswoman Hua Chunying said in her daily briefing Friday the US had been told their accusations were “totally inconsistent with facts.” “You can remind people in the US they should pay attention to facts and not make groundless accusations,” she said.

On Thursday, Chinese state media had strongly refuted the original claims by US defense officials, accusing them of “cooking up phony laser stories.”

“The US should treat the base with a fair attitude and stop making up rumors about it,” the expert was quoted as saying.

On the civilian side of things, Treasury Secretary Steven Mnuchin and other leading American trade officials ended a round of talks in Beijing with seemingly no progress being made on significant issues (e.g., the trade imbalance, the Chinese targeting U.S. technology and intellectual property).

Both sides say the talks will continue with quarterly meetings.

Despite the lack of tangible progress, Amy Celico, who was a China specialist at the U.S. Trade Representative’s Office under President George W. Bush, says that to some extent in this case, no news is good news.

“The fact that the result of the meeting wasn’t slapping unilateral measures in place — as had been threatened in advance of the meeting — I think is a good one,” Celico told NPR.

In conclusion, it appears that at this time in history, China is America’s best frenemy.

Maybe we should publicly label them acts of aggression and start firing at them. Then sift through the rubble to fiñd the hardware and the perps for proof….

We “accidentally” bombed the Chinese embassy in Belgrade once. I sure hope something like that doesn’t happen in Djibouti.

Chinese attempts to bamboozle the West with propaganda and bogus press statements tend to be a bit ham-fisted. But a petulant whine like “the US should treat the base with a fair attitude and stop making up rumors about it” is notably clumsier than usual. And “remind people in the US they should pay attention to facts” is simply amateurish. This makes me suspect that whatever they’re up to, they didn’t expect to be noticed, were surprised when they were, and didn’t have a response tactic prepared. Off-the-cuff stopgaps reminiscent of dusty old posters from the Cultural Revolution are all they can come up with on the fly.

Communist countries, and even ones which aren’t all that communist any more, are saddled with elephantine bureaucracies. These are absolutely required by any communist government, because communism—like all forms of socialism—is all about control. The Central Committee requires some mechanism to control everything. The surveillance society, the byzantine bureaucracy, the pervasive police presence; these are how socialism functions, even in the abstract ideal.

As bureaucracies age, they ossify (at best) or rot from corruption (at worst). In neither case can they respond rapidly to unexpected events. It takes a while for news of events on the ground to filter back to the control center, then even longer for instructions to filter back down. This is why unusually clumsy and ill-considered statements are the likely response when confronted by the unexpected.

“Communist countries, and even ones which aren’t all that communist any more, are saddled with elephantine bureaucracies…”

This effects even the U.S.: when obama was infesting the White House, we had eight years of an elephantine rat of a ‘first lady,’ who still believes her own press:

An elephantine rat? Would that be a hyrax?

They probably got the technology from the clintons:

This may seem like a minor point to those unfamiliar with the economics of the situation, but the Chinese are heavily involved in the poaching trade.

Tiger parts are off the table because there are too few tigers? No prob, lion parts are just as good. And African governments are only too happy to oblige.

This is the reason why African governments ban legal hunting. The pesky safari operators and paying hunters get in the way of their poaching-for-China operations. It’s why the kenyan government outlawed hunting in the 1970s. That was no great victory for wildlife. Quite the opposite.

The problem is nobody, anymore, is compensating the average Kenyan for just trying to make a living raising cattle. So the lions are worth far more dead as far as they’re concerned, and no threat to their livestock, and parted out than alive.

This didn’t happen when Kenya had a legal hunting industry. There was no “trajedy of the commons.” Because there were no commons. Safari operators bid on blocks (Kenya used to operate on the block system) and they AND the hunters who paid them jealously maintained them. The whole point was to go to a land teeming with game.

That’s not the point anymore. So the land isn’t teeming with game. Just body parts for China’s traditional medicines.

Don’t we have bombs that home in on a laser spot?

On Thursday, Chinese state media had strongly refuted the original claims by US defense officials, accusing them of “cooking up phony laser stories.”

OK, language peeve time. No, they did not refute the claims, nor did they even rebut them. They simply denied them. It annoys me when people speak as if merely denying something constitutes a refutation. Merely rebutting a claim requires offering some evidence or an argument against it. Refuting it requires offering a convincing rebuttal. Words matter.