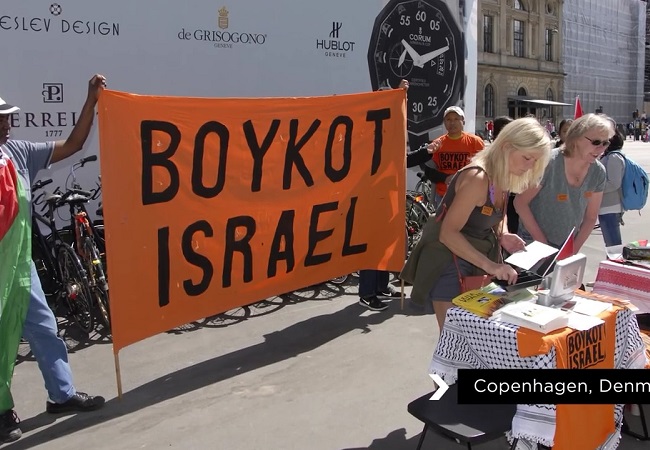 Israel called on the European Union (EU) to stop funding organizations supporting terrorism against Israeli civilians and the boycott campaign against the state of Israel. A study published by Israel’s Ministry of Strategic Affairs singled out more than a dozen European and Palestinian non-governmental organizations, or NGOs, that have received millions of euros from the EU despite their links to internationally designated terrorist groups and the anti-Israel boycott movement.

A copy of the study was handed to the EU foreign policy chief, Federica Mogherini, British newspaper Daily Mail confirmed.

“Today we revealed that the EU continues to give millions in taxpayer money to NGOs promoting anti-Israel boycotts–some of which are tied to EU-designated terror organisations,” Gilad Erdan, Israeli Minister of Public Security and Strategic Affairs tweeted on Friday.

Today we revealed that the #EU continues to give millions in taxpayer money to NGOs promoting anti-Israel boycotts- some of which are tied to EU-designated terror orgs! I call on HR/VP @FedericaMog to uphold the EU’s declared policy of opposing #BDS & immediately end such funding

Legal Insurrection obtained a copy of the 40-page study titled “The Money Trail”. The key findings of the detailed report are as follows:

[Israel’s] Ministry of Strategic Affairs … carried out an “in-depth study of funding from EU institutions for Palestinian and European NGOs which promote the delegitimization and boycotts of Israel. […] [The] study reveals that some of the EU’s funding for NGOs promoting boycotts of Israel is transferred directly from the EU, and some of it is transferred indirectly, via third parties which receive EU support. […]

The data shows that the EU directly financed organizations which promote anti-Israel delegitimization and boycotts to the approximate sum of more than five million euros in 2016. In addition to this sum, the funding provided by the EU to third party NGOs, which then transferred funds to boycott-promoting NGOs, should also be taken into account (although lack of data prevents us from determining the full scope of such funds). Furthermore, it is important to note that some of these organizations receive aid from individual European Union countries. Thus, a situation arises in which delegitimization organizations receive “double funding”, from both the EU and the EU member states. […]

[The S]tudy also raises the concern that European taxpayers’ money is being used to support ties with terrorist organizations. For example, the report identifies direct EU funding to the NGO Norwegian People’s Aid (NPA). In April 2018, the US authorities fined the NPA following an investigation which found that the NGO had sponsored projects in which the EU-designated terrorist groups Hamas and Palestinian Front for the Liberation of Palestine (PFLP) took part. The study also identifies indirect EU funding to the Palestinian Centre for Human Rights (PCHR) and Al-Haq. Al-Haq and PCHR have multiple links to the PFLP- an entity deemed a terrorist organization by the EU, United States, Canada and Israel. [italics added]

The detailed report, however, does not cover the full extent of the EU and European funding going to such questionable organizations. The “analysis does not cover the EU’s total assistance” but selected NGOs “under review,” the report concluded.

The report also looked into EU’s “indirect funding” network siphoning off money to groups and activists involved in anti-Israel campaign in Israel and the West. The money is often granted to a “third party,” an organization that enjoys the EU’s trust, but ends up “trickling down” to groups with links to terrorism and anti-Israel boycott movement.

Palestinian Centre for Human Rights and Al-Haq, both NGOs linked to the terrorist organization the Popular Front for the Liberation of Palestine (PFLP), for example, receive indirect EU funding through multiple third-party organizations. These intricate funding networks suggest a level of complicity among those involved. This raises a serious question: Are EU officials aware of these networks designed to funnel European taxpayers’ money to terrorist sympathizers?

The issues raised in the report are not only relevant to the security of Israel alone. In the wake of European migrant crisis, a large number of Shia-Islamist Hezbollah fighters have entered Germany. “Since mid-2015 there are increased indications of fighters from Shi’ite militias entering Germany as legal refugees,” a 2017 German intelligence report revealed. According to Germany’s domestic intelligence agency (BfV), around 950 Hezbollah operatives have found safe haven in the country. Earlier reports place the number of Hamas members in Germany to around 300. Any EU funding going to anti-Israel groups and agitators will feed these emerging terror networks within Europe as well.

Given EU’s hostile stance during the recent Hamas-sponsored border clashes, the bloc is unlikely to halt the funding for these terror-linked organizations. Perhaps, some in Brussels even see these rogue groups as means to pressure Israel into compliance. However, rearing such groups in one’s own backyard could backfire, big time.

Europe has let itself get so weak that nothing they do (other than finance terrorists) really matters anymore.

I was thinking the other day – I’ll bet that all of the combined military forces of the EU, all nations together, couldn’t last more than a few hours in a true firefight with the IDF, or any other competent military.

Europe isn’t even a paper tiger – they’re a paper dachshund.

Read “Catch the Jew” by Tuvia Tenenbom. It’s not only entertaining and funny, but it reveals the mendacity of the anti-Israel European NGOs. Definitely worth the read.

EU = Douchetools. Really fed up with them.

The EU does not restrict it funding to NGOs which are solely anti_Israel. It is actively funding NGOs which are destroying European civilization by importing millions of uneducated, unskilled, radical Muslims. Either the EU leadership is the stupidest group of people on the planet, or it is actively trying to destroy Europe.

I see the EU policy as the 1% trying to get the 99% to fight among themselves.

This is news? Of course the EU supports the anti-Israel groups who want to finish Hitler’s task — they would love to reactivate the gas chambers.

Europe has done their best to export Jews and demonize them, while importing as many Muslim radicals jihadists that they can manage. Europe will eventually become a collection of destroyed countries with a few holdouts like Poland and Hungary fighting a war for survival. Export a people that work hard and replace with layabouts. Yeah that’s the ticket! “And if we give them everything they want they will keep us in power!”

I never understood anti-semitism Back when it was decent Kali was a good place to grow up. I was raised with a bunch of Italian and Portuguese (San Leandro, if you wish to know what I’m talking about) Catholics. And mixed bunch of Chinese kids, and one Jewish family.

Jews, there aren’t a lot of you.

We all played together.

I knew about racism. If you could have heard my Uncle talk you’d think he was the most racist guy who ever lived. And you would be wrong. He wasn’t racist, he was a firefighter in a major west coast city. And he was consistently denied promotions he clearly deserved. He wasn’t racist, he was just anti affirmative action. He didn’t give a s*** if you were black or white, if you could perform the job he was on your side.

I carried that with me into the Navy. Loyalty runs up and down the chain. I don’t care about your color, just that you can do the job.

Maybe I was eleven when someone told me about antisemitism. I think it was a Klansman (and don’t kid yourself about Klansmen, non Americans; we are not chock full of them, and if you loaded all of them into the Cotton Bowl you’d still have 50,000 empty seats) And I needed to have him explain it to me three times. Come again? Why am I supposed to hate Jews?

I had to play the Klansman because he was supposed to hate me as a Papist.