“guaranteeing he will remain in prison until 2024” 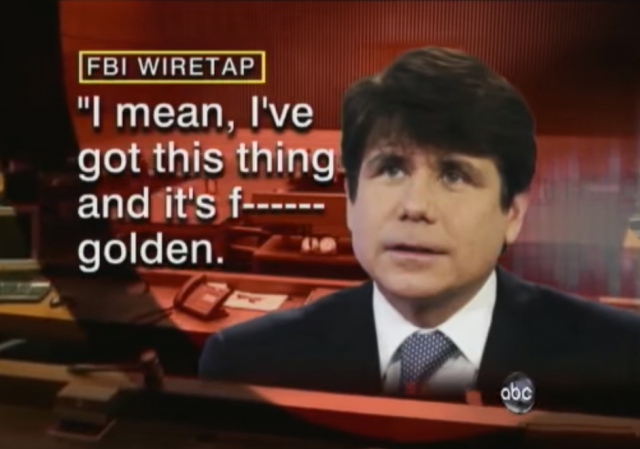 Back in 2008 when Obama was running for president, then Illinois governor Rod Blagojevich was busted for trying to sell Obama’s vacated Senate seat. A few years later, he was sentenced to 14 years in federal prison.

Longtime Legal Insurrection readers may recall that Professor Jacobson was the No. 1 Blago blogger. Read all about that here. He also created The Official Guide To Blagojevich Blogs.

Blagojevich was hoping for a hearing from the Supreme Court but is out of luck.

The U.S. Supreme Court announced Monday it will not hear former Gov. Rod Blagojevich’s appeal, marking the end of a decadelong legal road and virtually guaranteeing he will remain in prison until 2024 barring a presidential pardon or commutation.

The justices did not comment in letting stand the convictions and 14-year prison term that Blagojevich is serving. It marked the second time in two years that the high court has rejected hearing Blagojevich’s appeal.

Blagojevich’s lawyers had hoped the Supreme Court would take up his case to make clear what constitutes illegal political fundraising. They argued that politicians are vulnerable to prosecution because the line between what’s allowed and what’s illegal is blurry.

His convictions included trying to extort a children’s hospital for contributions and seeking cash in exchange for an appointment to the U.S. Senate seat vacated by Barack Obama when he was elected president in 2008.

It’s ironic that he’ll remain in prison until 2024 unless he gets a pardon from President Trump. Blago was actually on Trump’s Celebrity Apprentice show in 2010.

The former governor’s wife Patti Blagojevich is unhappy with the court’s decision.

The wife of imprisoned former Illinois Gov. Rod Blagojevich says she and their two children are disappointed that the Supreme Court decided not to hear her husband’s appeal of his corruption convictions.

A Monday statement from Patti Blagojevich says she understands “the judiciary” is “no longer an option” for winning her 61-year-old husband’s release.

The justices didn’t comment Monday in letting the convictions and 14-year prison term Blagojevich is serving stand. They also refused to hear his appeal in 2016.

In 2017, Chicago Magazine published a story about Blago’s life in prison. It’s a long piece but very interesting. Read it here.

Bet he was hoping for a Clinton presidency so she would pardon him.

If Barry and Blago were Republicans, Blago would still be in prison and the FBI would be breaking down Trumps and his attorneys doors to find out what they knew and when they knew it

“guaranteeing he will remain in prison until 2024”

That might be just long enough for the next convicted former Illinois governor to take his place.

Well, there IS that story of yore about an old lady who couldn’t understand WHY people were so worried about the Mob when there were still so many Democrats to be jailed. Of course, it IS just a rumor, and you can’t believe ALL of them…or can you?

if you get a chance read Will Rodgers columns from about 100 years ago, you could probably publish them today, and no one would know how old they were.

Kind of ridiculous. He’s spent more time in prison already than murderers, rapists, etc. Don’t get me wrong he deserves to be in prison.

In an age where every prison system has to release violent offenders every day well before their sentence is up, perhaps eight years is enough for attempted bribery.

I agree on it as a matter of punishment. OTOH, it keeps him away from anything he break.

Blago is the goat for everything bad that’s come out of Illinois.

Blagojevich’s lawyers had hoped the Supreme Court would take up his case to make clear what constitutes illegal political fundraising.

That sounds like a legitimate question. Political campaigns cost money. Therefore candidates must be able to raise money. Otherwise, only those already rich enough to fund their own campaigns could successfully run for office. So giving money to politicians can’t automatically be assumed to be corruption.

So exactly which bag of cash given to a politician is a legal contribution toward a necessary political expense, and which bag is bribery?

It’s not obvious that yet another court case rehashing this old problem would provide much clarity.

Well on the bright side ( from his point of view ). Blago will come out having missed the whole Trump presidency. He still can’t figure out how a guy wioth hair like that got elected.

Hmmm, so Blago gets to rot in prison until 2024, eh? Cue the freaking tiny violins. Frankly, this puke deserves to die of old age in prison, along with every other politico who takes a bribe. When someone is given much, much is required.

I’m not saying he wasn’t guilty, but I think he was railroaded.

oh, he’s guilty, just no more guilty than many of the others.

He must have really pissed of Hussein and Rahm. Or he’s just too white.