How long before the Palestinian propaganda machine blames Israel for health problems from the toxic smoke plumes?

Today was the second attempt by Hamas and other terrorist groups to breach the Gaza-Israel border under cover of civilian “protests.”

When this was tried a week ago, approximately 18 Gazans were killed, almost all of them documented to be military members of terror groups, as we documented in two posts, PHOTOS: Most Palestinians killed at Gaza border clash were terrorists. and 15 terrorists now identified among dead from last Gaza border clash, as Palestinians plan toxic tire fire.

So Hamas came up with a plan.

The plan was to create a massive tire burn for next assault on Gaza-Israel border to provide cover smoke. Residents of Gaza gathered thousands of tires amid a celebratory atmosphere. 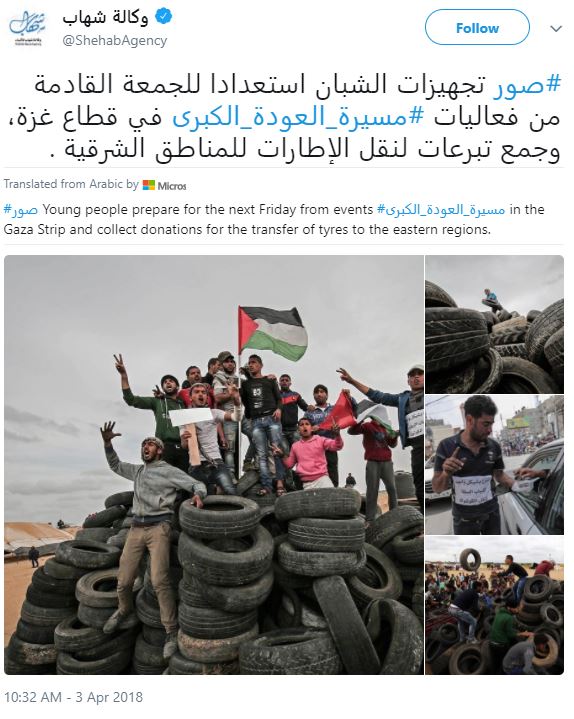 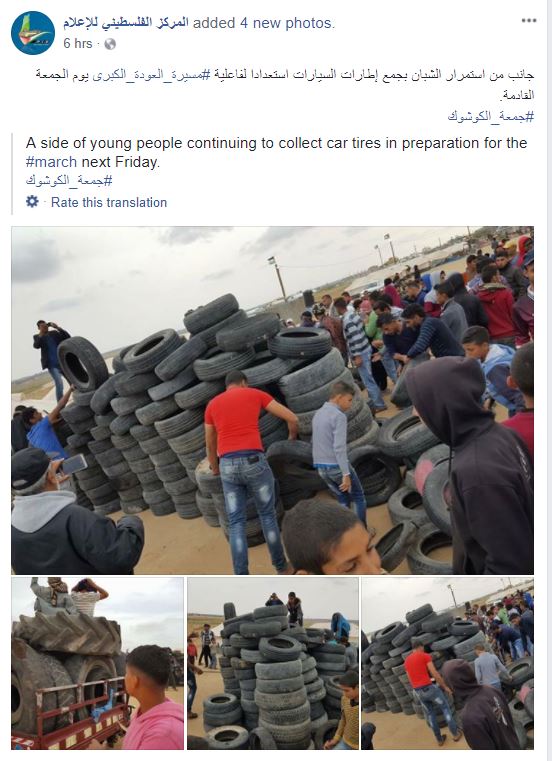 Today the massive tire burn took place along with almost 20,000 “protesters.” But as before, it was a cover to try to infiltrate terrorists across the border. The Times of Israel reports:

As night fell on the second successive Friday’s Hamas-backed “March of Return” at the Gaza border, the Israeli army said it had managed to frustrate what it called the terror group’s “manipulative” efforts to breach the border fence and carry out acts of terrorism under the cover of a public protest….

Some 20,000 Gazans participated in Friday’s demonstration — compared to over 30,000 a week ago — and the Hamas-run health ministry in Gaza said seven people were killed in the course of the day, compared to some 20 a week ago.

Israeli military sources said it was believed that everyone who was hit by IDF gunfire had been engaged in violence. Some Hebrew media reports quoted IDF officials saying all those who were hurt were Hamas operatives.

For the second week straight, Hamas is inciting riots along the Gaza-Israel border in attempt to achieve its goal of harming Israeli civilians regardless of what happens to its own people. pic.twitter.com/HJ5G2vGGr7

Hamas leaders were present predicting a march on Jerusalem:

As thousands of Palestinians demonstrated along the Gaza border on Friday, Hamas leader Yahya Sinwar, speaking before protesters, warned that the Strip was ready to “explode in the face of the occupation.”

He said the world should “wait for our great move, when we breach the borders and pray at Al-Aqsa,” referring to the major Muslim shrine in Jerusalem.

Arriving at one of the demonstration sites, Sinwar received a hero’s welcome. He was surrounded by hundreds of supporters who chanted, “We are going to Jerusalem, millions of martyrs.” 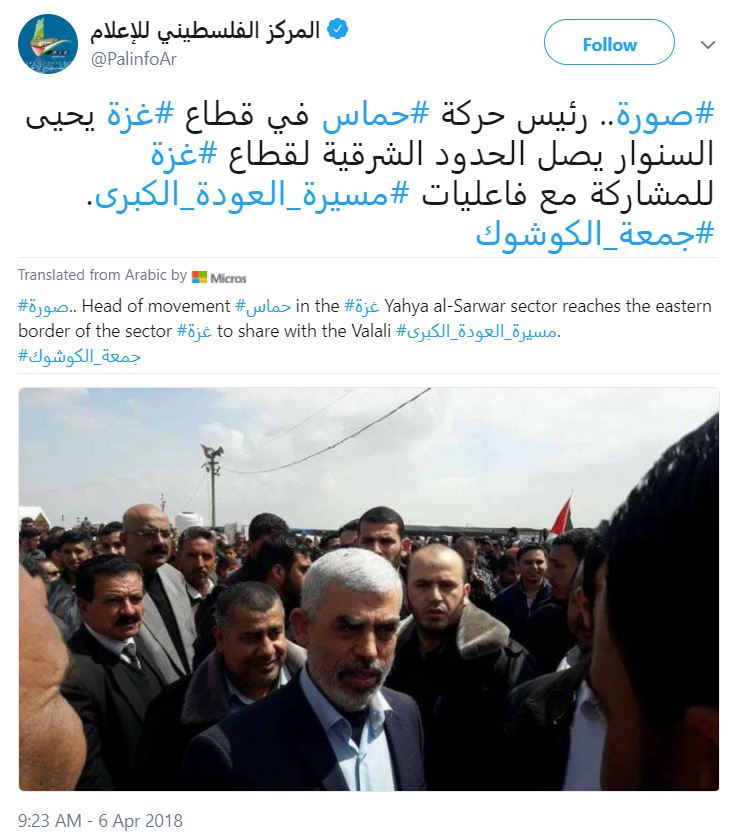 In places the fires and smoke plumes were intense, in other places not so much:

Loudspeakers urge #Palestinian protesters on as ambulances can be heard in background as smoke billows next to #Israel border #HappeningNow pic.twitter.com/byDGXdlRYa

Here are some photos, many of which were promoted by Palestinian social media: 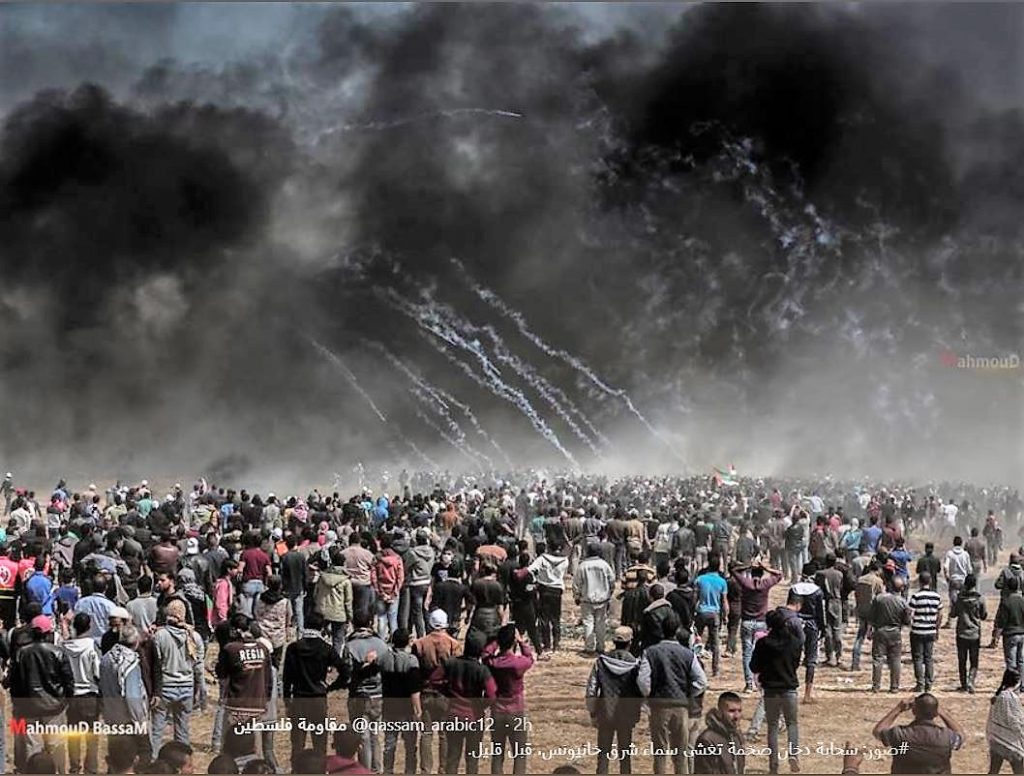 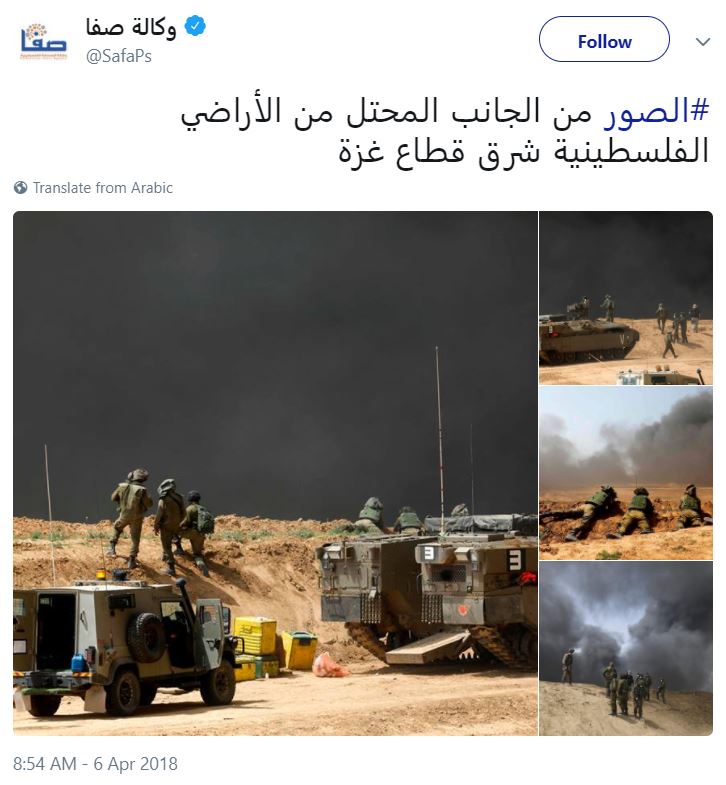 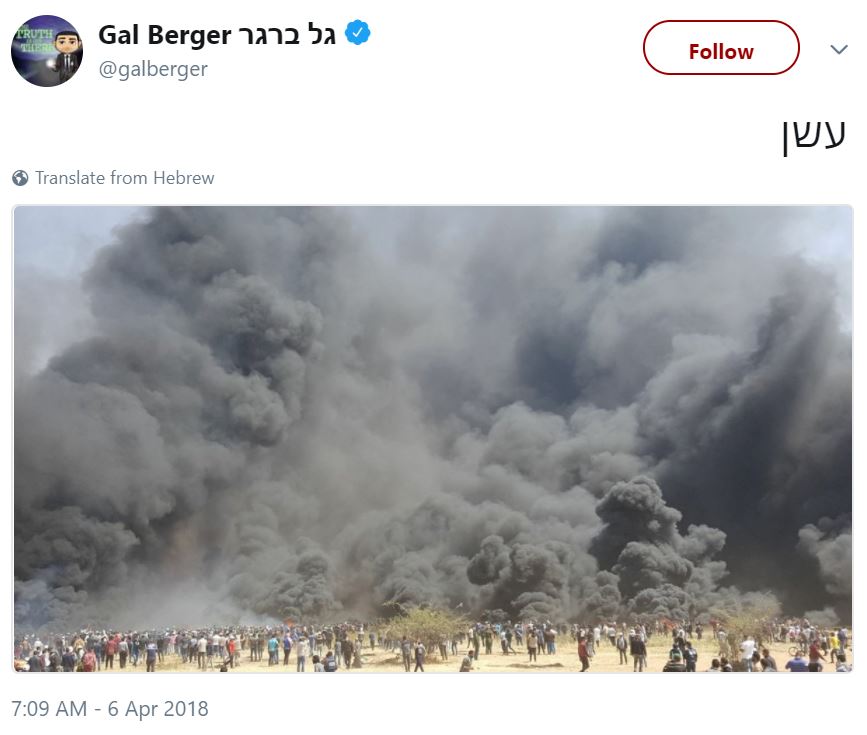 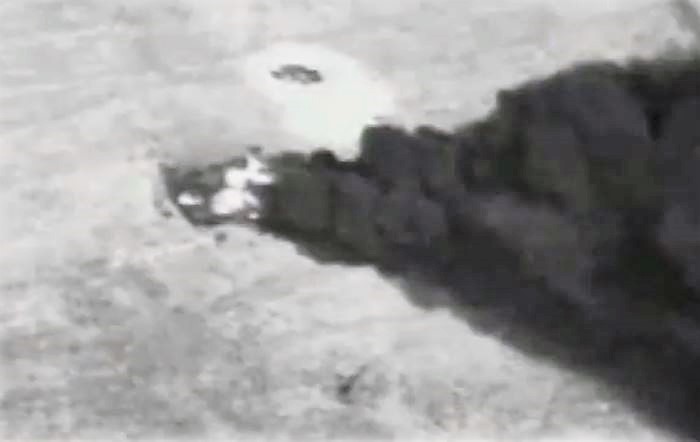 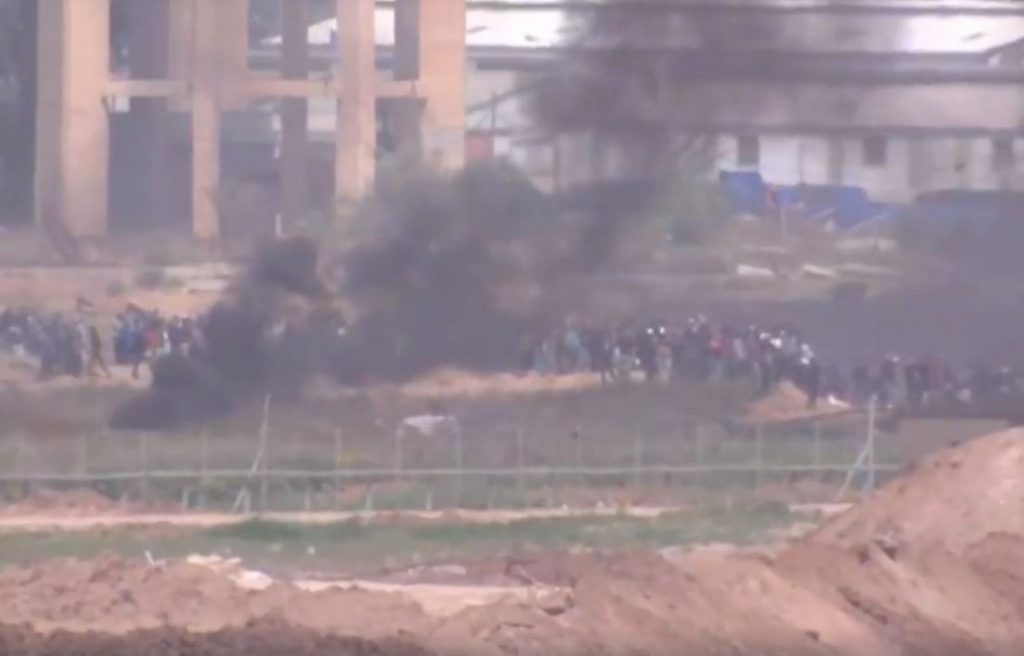 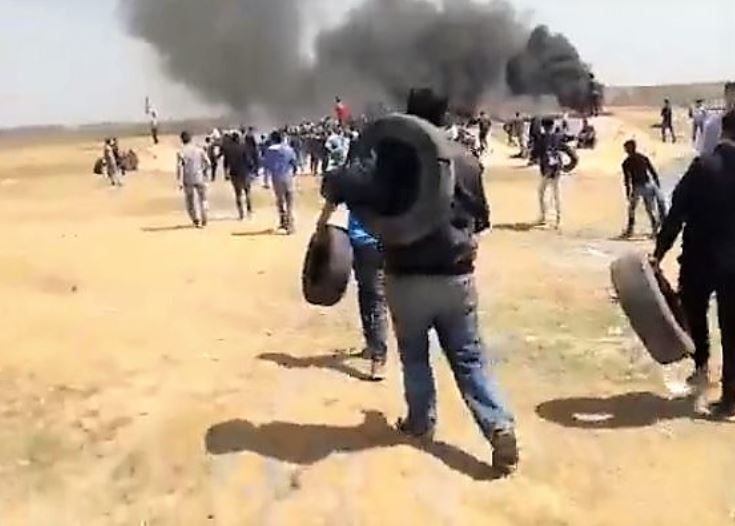 As before, the participation of children was promoted. 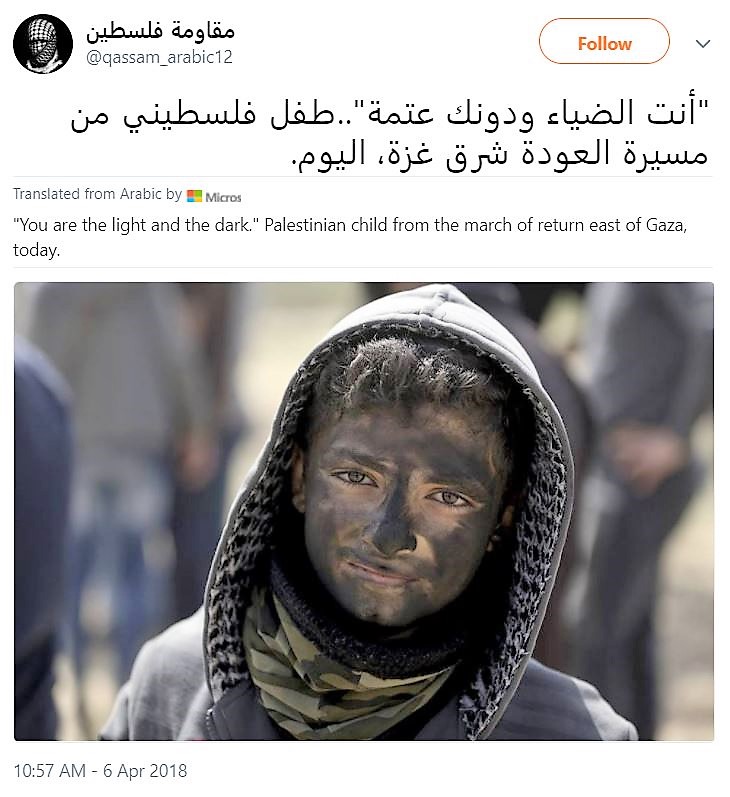 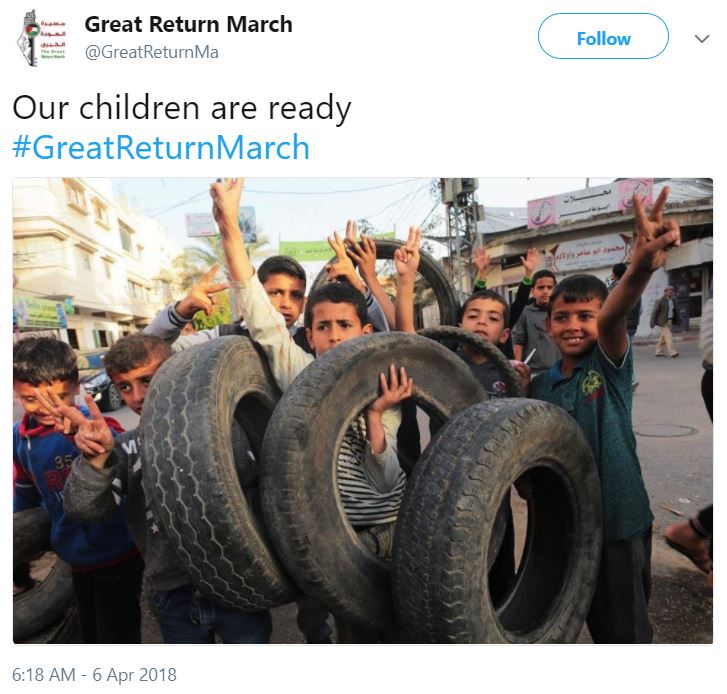 And there were the obligatory and fake-spontaneous photos ops. 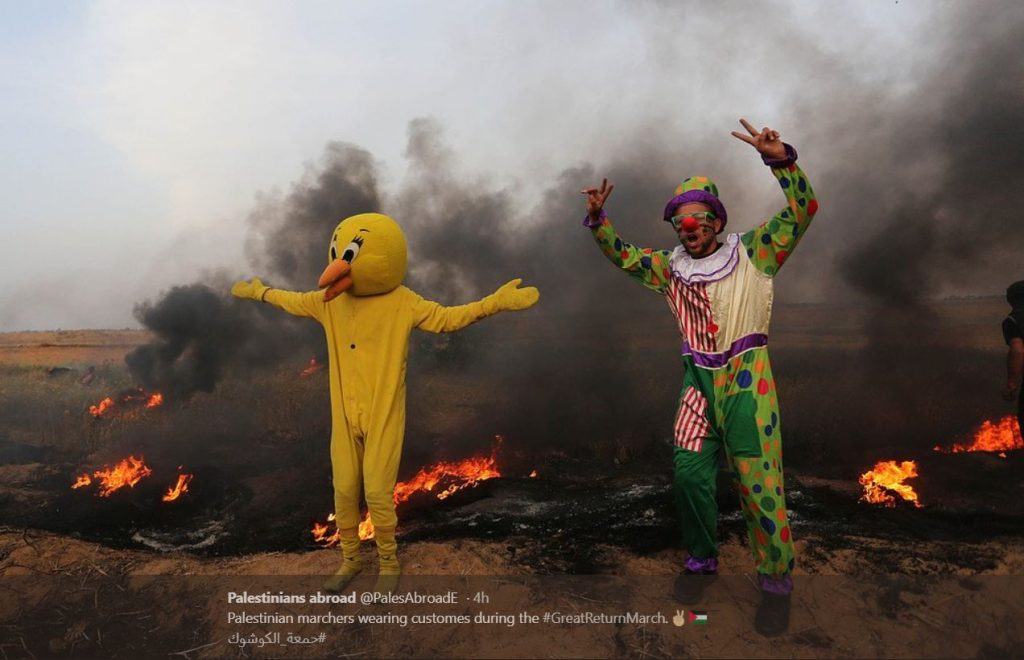 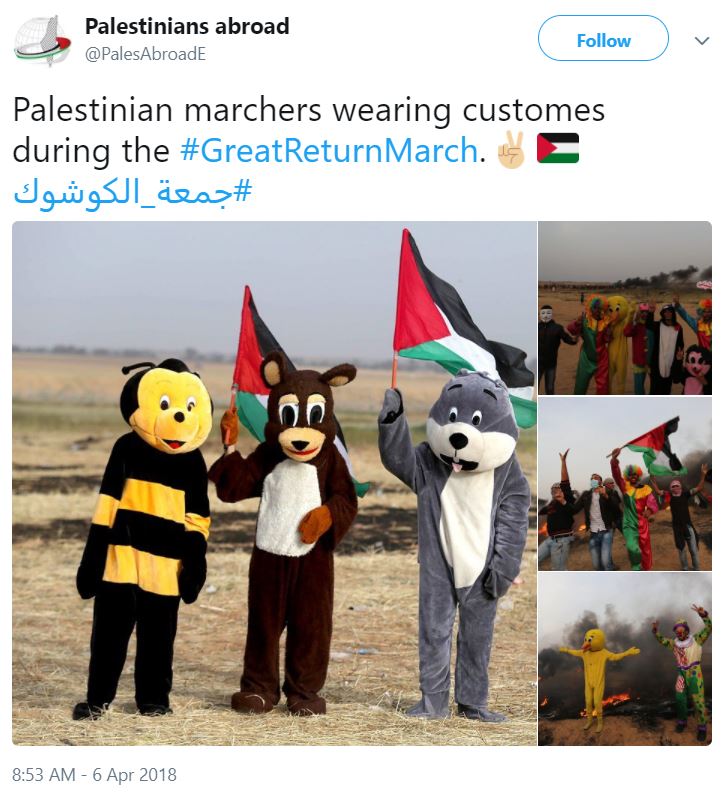 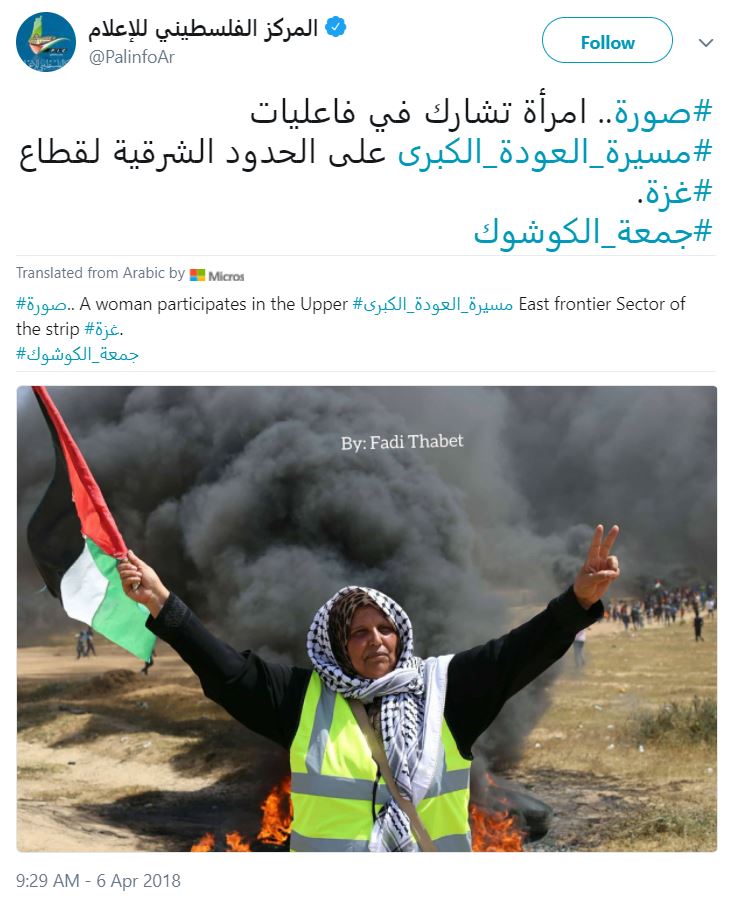 The Israelis had an answer that was not only military. 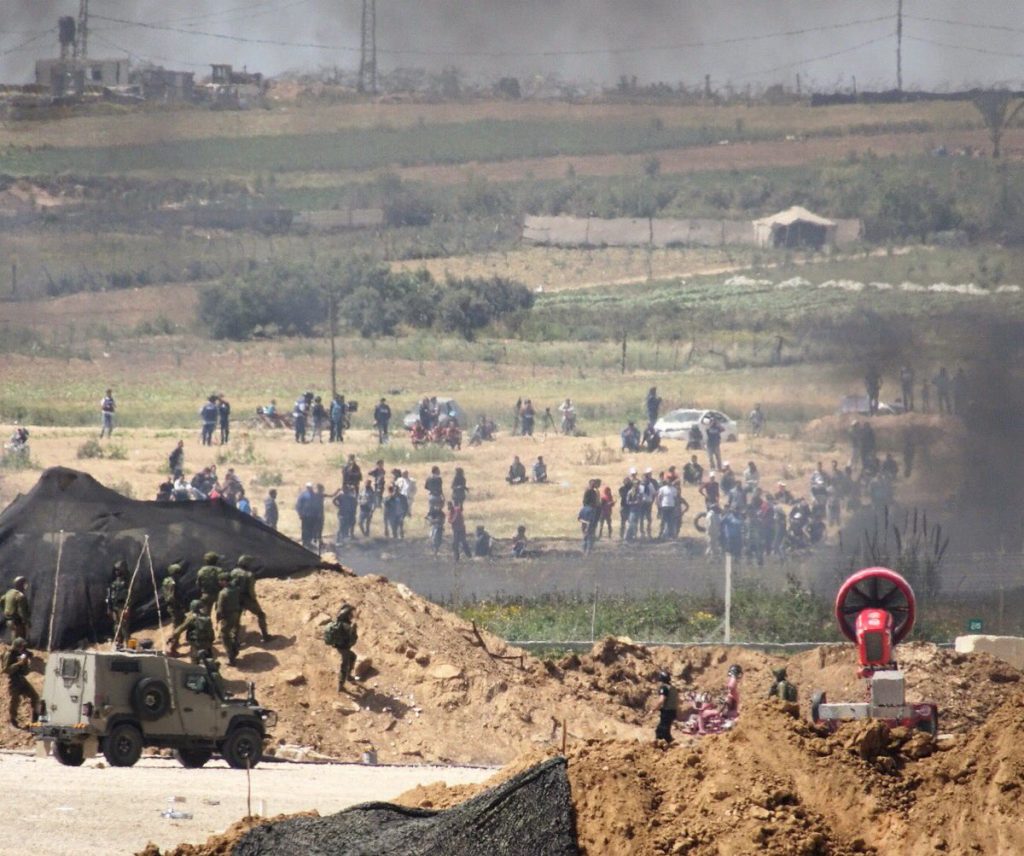 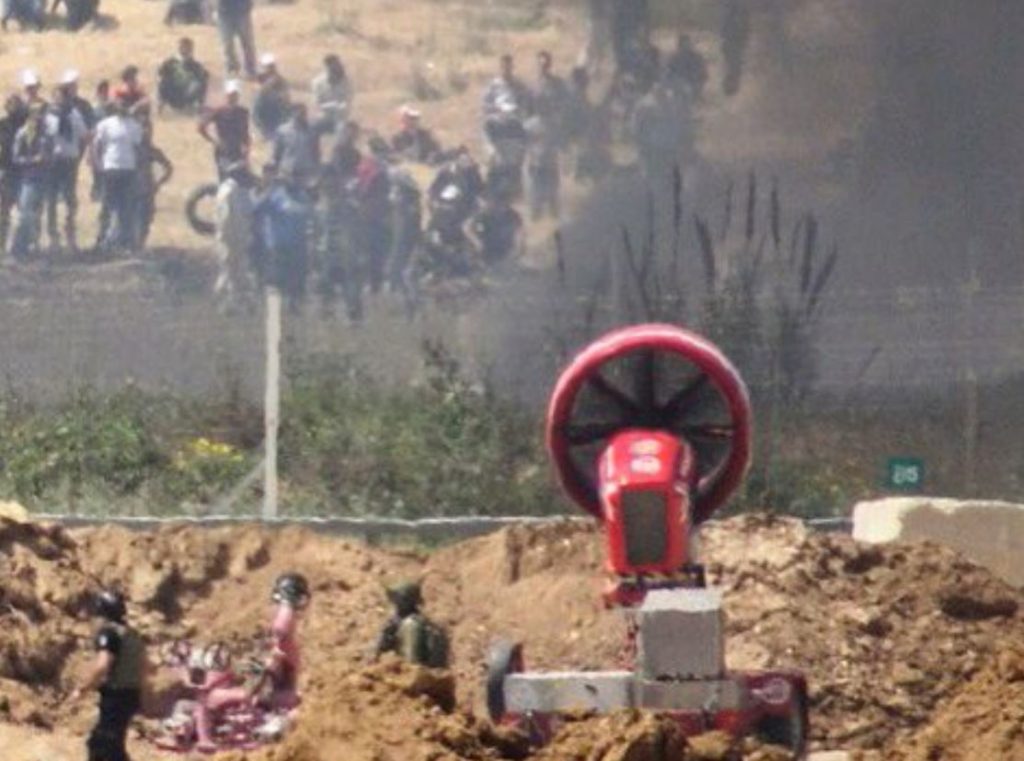 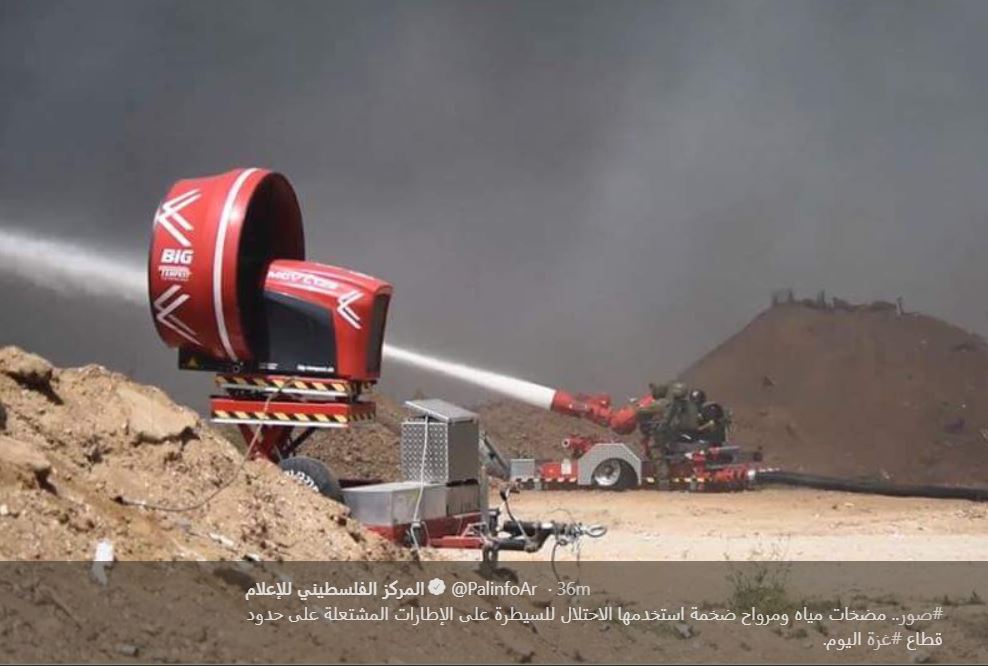 At the end of the day, all the Palestinians managed to do was to pollute Gaza.

That’s all the tires they could gather? They are the most inefficient people I’ve ever seen. Any halfway decent used tire place or landfill could yield that many.

Stacking them along the border and setting fire would have provided some concealment and irritation but unless it was a lot bigger stack it’s pretty weak even as a visual.

Ever notice in the satellite pictures of N. Korea that there are no vehicles on the road? Seems like cars are for people that don’t live in third world shitholes. Even if the well off have cars they don’t really drive them a lot. Dirt roads seem to be really bad for nice cars. Maybe BMW will make a Series DSPT, or the despot series.

Hamas doesn’t care if 10,000 Palestinians come down with lung disease from this stunt just so long as they get sympathetic coverage in the Leftist press, which as noted will put the blame on Israel.

I’m okay with them all getting lung disease but they’ll probably be treated in Israel at the Israeli taxpayer’s expense.

When are they going to tire of all this. If they keep it up they’re never going to have a Goodyear. The guy with the Molotov cocktail in his sling is trying to pitch a Firestone. And with all the black smoke the food trucks in the background are never going to get a Michelin rating.

I can’t help but picture hundreds of Palestinians going outside their home only to discover their vehicle up on blocks and missing all the wheels.

“You’re not going to *object* to us taking your tires for the demonstration, are you? Only somebody who is working against the Palestinian people could possibly object, perhaps a spy, or saboteur…”

Damnit know all the cars in Gaza running around on bare rims.

Running on bare rims is going to awful of fuel economy.

Where are all the Eco-Green Wienies…. Er…. Warriors to protest this evil by the Pal-is-tiny-ones?

All tire warehouses and sales outlets should be burned to help Palestinians achieve their goal of burning tires. Going ahead, embargo all tire imports, because they are too stupid to be allowed to have tires.

“At the end of the day, all the Palestinians managed to do was to pollute Gaza”

“March of Return” meaning, “What’s ours is ours and what’s yours should (shall) be ours also.”

And, yes, it’s a good thing they’re so ineffective. Although if they’d been just a little more effective they’d be wailing that their vehicles couldn’t be used because they were missing tires, and, could you please send some more “humanitarian aid” so we can buy some replacements?

I wonder if our southern invading army is watching this and beginning to think it’s a good idea.

Wonder if the Professor has seen this yet….

Saudi Crown Prince: “Israel Has Every Right to Exist.”

Plus some observations about that here.

“NOBODY EVER ACTUALLY CARED ABOUT THEM; THEY WERE A USEFUL TOOL ONCE, AND NOW THEY’RE USELESS: Arab Leaders Abandon the Palestinians: Facing threats from Iran and Turkey, they want peace—and to strangle Hamas. “But the American protection on which Arabs rely cannot be taken for granted, as….

Kepha H in reply to notamemberofanyorganizedpolicital. | April 8, 2018 at 1:15 am

How long will the Wahabbi ‘Ulema allow this Saudi prince to get away with such assertions?

With any luck, the Prince already realizes that he and his people need to “disapear” any upstart Wahhabi preachers who don’t quickly learn to toe the new party line.

Sounds crude, but in tribal/totalitarian societies, that’s how it works.

“In Gaza news, while trying to cross the border into Occupied Territory, three Palestinian martyrs were killed by ruthless Israeli gunfire, and five died from smoke thrown at them by Israeli high-tech fans.”

The gap in morality, intellect and theological rectitude between these two cultures couldn’t be more distinct.

This is not complicated — the supremacist, totalitarian and belligerent ideology of “Submission” has, and, always will be, the root cause of violence and strife in the Middle East.

And, not for the first time, one must ask — how the heck do all of these goose-stepping, jackbooted Islamic terrorist thugs continue to have social media platforms from which to spew their vile hate and incitement?

Let these idiots communicate via carrier pigeon and smoke signals. Why should these Islamic thugs benefit from western technology and use it to attack the west and allied interests?