“Ben is a champion of working people” 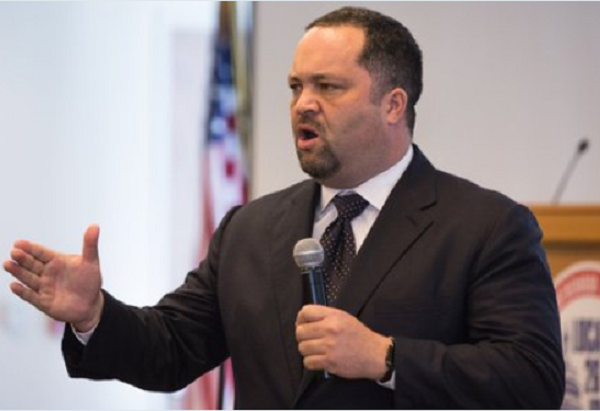 Former NAACP president and current community organizer Ben Jealous is running for Maryland governor and early on received an enthusiastic endorsement from Senator Bernie Sanders (I-VT). Since then, he’s won the endorsements of Senator Cory Booker (D-NJ) and now of Senator Kamala Harris (D-CA).  Both of whom are positioning themselves for a 2020 presidential bid.

As a former board member of the Bernie campaign’s latest incarnation, Our Revolution, Jealous’ campaign site reads like the wishlist of the self-avowed socialist Sanders.

Last year, the two joined forces to push Sanders’ grossly expensive, unworkable “Medicaid for all” scheme, and Jealous, a vocal supporter of Black Lives Matter, wrote up a plan to “address police violence in black communities.”  The plan is posted at the Sanders Institute website.

Given Jealous’ support for Sanders in 2016, it’s unsurprising that he’s not been as eagerly embraced by establishment Democrats as he has been by progressives like Harris.

Proud to be endorsed by @SenSanders!

Proud to be endorsed by @CoryBooker !

Proud to be endorsed by @KamalaHarris ! https://t.co/jBriwf7b7W

Maryland gubernatorial candidate Ben Jealous has received an endorsement from Sen. Kamala D. Harris (D-Calif.), adding to the list of nationally-known progressives who are backing his bid for governor.

“Ben is a champion of working people,” Harris said in statement. “Everyday we see the damage being done to our country by this administration and we need leaders in our states like Ben, who have shown the political courage our families need right now.”

Harris plans to rally for the Jealous campaign, a spokesman for the campaign said.

The former NAACP president has received a steady flow of endorsements from progressive groups and national progressive leaders.

Harris, who has become a leading voice on immigration reform and a rising star in the Democratic Party, joins U.S. Sen. Cory Booker (D-N.J.) and U.S. Sen. Bernie Sanders (I-Vt) in backing Jealous’s bid in the crowded primary.

He has also received backing from key progressive groups in the state, including Progressive Maryland, the Service Employees International Union and Maryland Working Families. Jealous has been slow to receive the same type of support from the Democratic establishment.

Jealous stepped down as NAACP president in 2013.  At that time, Mandy wrote about how racially polarizing Jealous was in that role, including the passage of an NAACP resolution that deemed the Tea Party “racist.”

Jealous came under fire in early 2013 for stating (quite rightly) that black people were “worse off” under Obama; he resigned from the NAACP later that year.

Jealous is running against a slew of Democrats in the primary, and Rushern L. Baker III was in the lead as of March 1st with 26% to Jealous’ 14%.  Michelle Obama’s former policy director, Krishanti Vignarajah, is polling at 3%.

Prince George’s County Executive Rushern L. Baker III remains ahead in a swollen pack of Democratic candidates for governor, finding support among more than a quarter of likely voters in the June primary election, a new poll shows.

Baker, who has emerged as the front-runner in other early polling, is favored by 26 percent of voters statewide, trailed by Baltimore County Kevin B. Kamenetz with 15 percent and Benjamin T. Jealous, the former president of the National Association for the Advancement of Colored People who resides in Anne Arundel County, with 14 percent, the poll shows.

The Democrat primaries for Maryland governor will be held on June 26, 2018, the gubernatorial election on November 6, 2018.

With a double-digit lead over any Democrat challenger, Republican governor Larry Hogan is the current favorite to win in November.

A community organizer, who has the backing of both socialist Bernie Sanders and Marxist Kamala Harris? What a cheerful picture that paints! Now all they need is to get Obama’s endorsement.

Is this really the best that Maryland can put forward? Really?

I’m sure that Maryland could do a lot better, but Baltimore their Chicago.

The guy is a compendium of red flags. You have to be a special kind of fool to want him making decisions.

Perhaps he can get a temporary position with Mayor Pugh. 😉

And why is it the champions of the working people have never had a job which actually required work?

“And why is it the champions of the working people have never had a job which actually required work?”

/This. A thousand times this.

I guess it must be the same reason the top al Quaeda and ISIS leaders don’t rush to endanger themselves for jihad. You won’t find any ISIS leaders hijacking planes to fly into buildings. You wouldn’t have found bin Laden sidling into a nightclub with a gun or slithering behind the wheel of a jihadi van to destroy the infidels in the name of Allah. Sacrificing yourself for Allah is great, my doing it . . . um, never going to happen. I’m all for that Allah, jihad, caliphate thing, but well, you know, only when you’re the one dying for the cause.

Meanwhile, morons in the U.S. believe that multi-millionaire Democrats in Congress give a crap about their “crumbs” when they spend $1k on a pair of panty-hose or a new tie. Democrat voters are shockingly stupid.

Every totalitarian wienie in history has always presented himself as a “Champion of the People”. What this signifies is that they believe that the “people” work for and belong to them and that they are no answerable to the people in any way.

Just something to remember.

The appearance of “working people” and “NAACP” on the same page does seem to be a clue that somebody’s using a random phrase generator to write campaign slogans.

As a native Texan who moved to Maryland 18 years ago to support my wife’s career… please don’t tempt them. We’ve determined their must be something in the air or soil (radon exposure?) to account for all the dumbassery we’ve encountered here. It’s so bad that we run an inside joke coded as Pod People and Spores.

And I’m trying to imagine all the liberal heads that would explode if candidate Trump had endorsed the leader of the National Association For The Advancement Of White People.