It also includes money for border security and veterans health. 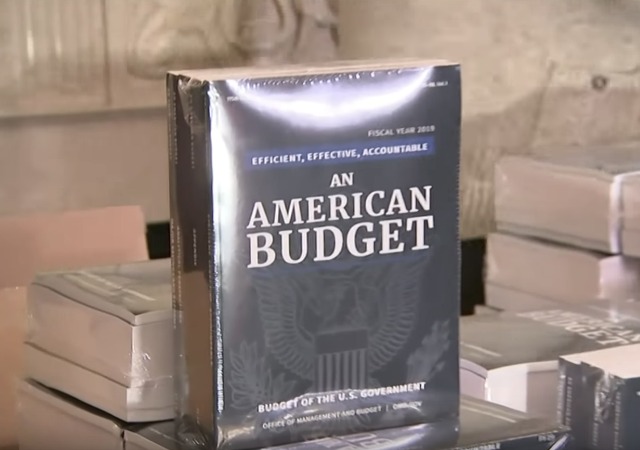 President Donald Trump has rolled out the budget for 2019, written by budget director Mick Mulvaney. While it demands cuts to federal spending, it avoids balancing the budget within 10 years.

Infrastructure received the main point of the budget for $1.5 trillion and cutting red tape. Trump tweeted out that after the country spent $7 trillion in the Middle East, it’s time to start investing in America.

Under the plan, $200 billion of the $1.5 trillion in proposed spending would be federal dollars, which a senior administration official said would come from “reductions in other areas of the budget.” The plan calls on state and local governments and the private sector to put up most of the funding. The federal funding would be used to match local spending, provide “incentives” and expand loan programs.

The plan also would boost investment for projects in rural America — including transportation, broadband, water, waste, power, flood management and ports — by $50 billion in a bid to address criticism from some Republican senators that the Trump administration’s initial emphasis on public-private partnerships would do little to help those areas.

But the Trump administration is casting another part of the plan as equally vital – streamlining the permitting process, which a senior administration official described as “fundamentally broken.”

That component aims to cut the permitting process for new projects from upwards of 10 years to just two years.

In order to do this, the White House wants one federal agency to decide on infrastructure bids “with decision-making consuming about 21 months and permitting consuming the remaining three.” This will “remove ‘duplicative’ elements that currently lead to second-guessing, delays and other problems when multiple agencies weigh in on the same decision.”

“The current system is fundamentally broken, and it’s broken in two different ways,” a senior administration official told reporters during a briefing Saturday. “We are underinvesting in our infrastructure, and we have a permitting process that takes so long that even when funds are adequate, it can take a decade to build critical infrastructure.”

Trump’s plan, the official said, offers “a permanent fix.” The plan also includes specific money for rural communities, aim to encourage apprenticeships and other forms of workforce training, and pay for unspecified “transformative,” “next-century-type” projects that would “lift the American spirit,” the official said.

Response From the Parties

Both parties agree our infrastructure needs help, but as usual, they cannot agree on how to go about it to fix it. Democrats have, of course, come out against the plan. Rep. Peter DeFazio (D-OR), the Transportation Committee’s top Democrat, said the budget “is not a real infrastructure plan – it’s simply another scam, an attempt by this administration to privatize critical government functions, and create windfalls for their buddies on Wall Street.”

Ah, yes. The buzzword “Wall Street.” He continues to predict doomsday by insisting that “our potholed roads will get worse, our bridges and transit systems will become more dangerous, and our tolls will become higher.”

The budget includes $13 billion more for two years towards “opioid prevention, treatment and long-term recovery.” It also has a request for $23 billion for border security, which also includes $18 billion for a border wall.

New spending and the tax reform bill means that the budget “will not wipe out the deficit.” This is the problem I had with the tax reform plan. Yes, in the short run, the tax cuts are great, but no one bothered to cut spending.

The budget cuts $3 trillion over ten years, but it also adds $300 billion. There’s no balancing the budget. How can you spend money when you don’t have it coming in?

Joseph Lawlor at The Washington Examiner wrote (emphasis mine):

Those spending cuts would mean that the federal debt would eventually fall as a percentage of GDP, from around 75 percent of the economy today to 73 percent at the end of the decade. But the budget wouldn’t balance in any of the next 10 years, which means there would be no reduction in the actual amount of debt the government has taken on.

That lack deprives Mulvaney of the talking point that he has drafted a plan for balancing the budget — a goal long sought by conservatives, who criticized President Obama each year for proposing budgets that never balance.

The difficulty for Mulvaney in balancing the budget is that Trump just signed a tax overhaul that is estimated to lower revenues by around $1.5 trillion over the next 10 years, and a spending deal that will add $320 billion to the deficit in the next two years. Those deficit-widening pieces of legislation cut against the goal of bringing spending and taxes into alignment.

Lawlor points out that the new spending along with the budget will probably lead to Trump NOT cutting “government programs in the years ahead.” Yes the budget cuts 40% on domestic spending, but “Trump just signed legislation increasing spending.” He continued:

The spending deal reached between Senate Majority Leader Mitch McConnell and Democratic Leader Chuck Schumer would pave the way for much higher spending over 10 years, adding around $2 trillion to the debt when interest costs are considered, according to the Committee for a Responsible Federal Budget.

In that scenario, the federal debt would rise from 75 percent of gross domestic product today to over 100 percent by the end of the decade. That would rival the debt run-up to pay for World War II.

It takes money to make money.

“Vanessa Trump and two others had to undergo decontamination and remain under observation at a New York City hospital after opening an envelope which contained an unknown white powder. The Secret Service has joined an investigation by New York City police into what appears to be an attack on the daughter-in-law of President Donald Trump and his son Don Jr”

Ragspierre in reply to notamemberofanyorganizedpolicital. | February 12, 2018 at 10:41 pm

You have it all wrong…

The BIG GOVERNMENT TAKES money to TAKE MORE money…to give to cronies.

Well, I guess we are going to build that. Now get rid of that law that requires union or union wages and use illegals (undocumented union members) and see how much the dems really love those border crossers yearning to be free and work for not much more.

Budget? What is this strange word. I seem to remember having heard it some time ago, perhaps in a previous decade.

$4 trillion? Are you sure it’s big enough? Since the deficit doesn’t matter anymore, why not 6 or 12 trillion? There are too many important things being left undone! People are gonna die!

The Democrats are just sore because Obama proposed something like this, and his administration failed to deliver.

Elephants got nothing on human beings for memory, especially when you add computers to the mix.

It pleases me to remember that one of DJT’s early actions was to begin a regulatory review.

Sore ! Are you kidding I’m delighted to see the party of fiscal conservatives just shoot themselves in the ass. All these yrs. of blasting democrats labeling them the party of big spenders. Boy but look at them now spending like drunken sailors like there is no tomorrow. The party of low taxes has just sent our nation into debt abyss and add to this raising the debt ceiling they have saddled future generations of Americans with about $22 trillion debt. Remember that ol’ saying there is no such thing as a free lunch the same applies here. Somebody is going to have to pay this massive debt it will be our kids and their kids. Way to go Republicans. FISCAL CONSERVATIVES MY ASS. I never want to hear another republican running on a platform of low taxes and small gov. What hypocrites these pukes are.

You mean media exposure don’t you ? Republicans are the fiscal conservatives right ? That is what they run on and the sheeple believe them. If there was ever a time to expose them for their hypocrisy they did a fine job themselves w/o the media bias as you claim.

Why not just grant the infrastructure money to the States and let them decide where to use it?

One risk is that a number of debt strapped blue states like CT, IL, and CA are already broke and they would use the money to subsidize their other priorities.

Strictures need to be in place to actually get infrastructure work done rather than let states use the money to pay pension debts.

Trump has a regrettable infatuation with spending “new money” on infrastructure when there is another sensible and responsible alternative that will boost spending on new construction, maintenance, and repairs. It is the proposal in the Transportation Empowerment Act, and the central thrust of it is to restrain the federal DOT and reinstate and return the gas tax program to the original intent. The bill aims to do it by eliminating the program drift and grift toward spending on things other than roads and bridges. The changes to the program could redirect a very substantial of the total gas tax funds presently collected back to the states for the original purpose of roads and bridges.

If the US increased infrastructure spending by that much and continued it for a decade and then more, the country could accomplish a lot without unnecessarily adding to the deficit and debt.

At least he submitted a budget. We can only hope they pass something legitimate instead of these continuing resolution boondoggles.