Trump to #TheResistance and Mueller: I’m not going anywhere, and here’s my 2020 Campaign Manager

Trump to #TheResistance and Mueller: I’m not going anywhere, and here’s my 2020 Campaign Manager

Early announcement of reelection campaign is an act of defiance

Donald Trump today announced that he was running for reelection in 2020, and that Brad Parscale would be his campaign manager.

Parscale was the digital Director for Trump in 2016, and took the world by surprise through his use of micro-targeting on Facebook.

It’s no surprise that Trump is running for reelection. But why announce so early, far earlier than prior presidents have announced reelection plans?

This is a message at several levels.

To #TheResistance, it’s a message that Trump is not going anywhere. Thoughts of impeachment and so on are pipe dreams. He’s not resigning, he’s loving what he’s doing, and he’s not done yet. It’s psychological warfare, and attempt to demoralize the opposition.

More than that the selection of Parscale is another message: The guy who beat you last time is running the show this time. 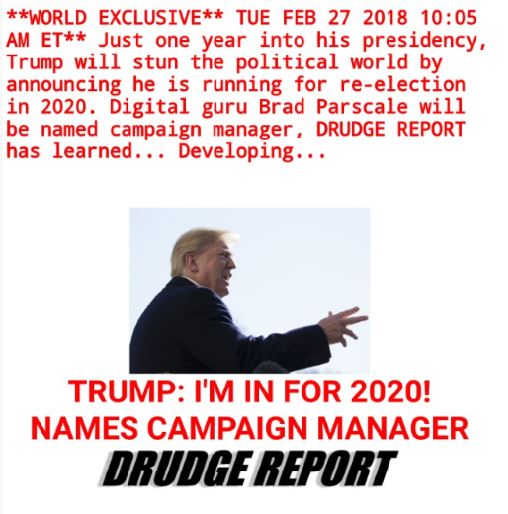 And there’s more. There have been conspiracy theories circulating on Twitter and elsewhere that Parscale himself was colluding with the Russians. So bringing Parscale back in an even larger role is a thumb in the eye of the Russia collusion claimants.

So add it all up, and this is Trump planting the flag and daring #TheResistance to come and take it.

But it’s more than that.

It’s a message to Mueller and his enormous team of prosecutors. Does anyone doubt that Team Mueller’s goal is to take down Trump?

The message is that if you are going to try to take me down, you are going to have to take down not only a sitting president but a presidential candidate. It’s also a message that Trump will fight to the bitter end.

Last, but not least, it’s a message to wobbly Republicans. This is Trump saying it’s my party now, so you have no choice but to get on the Trump train.

Add it all up, this unexpected move is classic Trump: Messing with the minds of his opponents while he pushes forward without hesitation or doubt.

Ben Shapiro had a good one on this:

(Darn, can’t figure out how to embed tweets. I feel so 19th Century.)

Unfortunately, neither is Mueller. He knows his job and it’s to get Trump and he won’t stop until he finds something, real or imagined, that will end the Trump presidency

Exactly right, and he will fabricate evidence to do it.

He’s in process of doing that right now.

notamemberofanyorganizedpolicital in reply to regulus arcturus. | February 27, 2018 at 2:25 pm

Folks, its time to start studying and doing deprogramming of the Democrat Party brain-washed and molested children.

David Hogg says he won’t return to school until gun control passed. He’s going to deny himself a high-school diplomas, apparently, because that’ll show us….”

So far he hasn’t had to.

Apparently you aren’t very observant – yes he has.

Mueller has been forced to contrive unrelated charges having nothing to do with Russia or the 2016 election.

Those charges are also likely fruit of the poisonous tree, and at least 1 indictment (Flynn) is in serious jeopardy now.

I am well aware of the talking points. I can tune in Hannity for myself. Please tell me how this differed from Ken Starr. I understand that I am encouraging a new set of talking points. But go for it.

Hint: Robert Fiske ended the Whitewater investigation after 6 months after coming to the conclusion that there were no criminal acts. Then along came Linda Tripp. ‘Clinton Vs. Starr’: A ‘Definitive’ Account

No you aren’t – they are not talking points.

Many people in the FISA scandal and related conspiracy are going to jail.

You liberals are about to have a major succession problem on your hands, since much of your recent leadership will be under indictment and jailed.

Correction to your misstatement above:

There were multiple criminal acts in Whitewater, and a draft indictment for Hillary was constructed –

Starr, like Fiske, concluded that there was nothing criminal in Whitewater. He did not present a count for that in his report.

There are lessons in this. Clinton emerged more popular than Gingrich. Maybe Trump will, too. There is no chance of him being impeached. But he is going to need more than his base to get re-elected.

There is no question that a vast right-wing conspiracy set out to get Clinton. Is there a vast left-wing conspiracy to get Trump? I doubt it. It is difficult to get 2 lefties together without getting 3 opinions.

Now you’ve stumbled over your own stupidity.

The lesson for you is everything you believe is wrong, and that the precedent of lawless abuse of power begun by Hilary & her criminal hubby is now unraveling and is about to be punished directly.

When the indictments begin next month, you will have a deep mental dissonance to reconcile, but will be unable to do so given the overwhelming evidence of corruption and criminality.

I’m not a huge Trump supporter but I love this!! Screw you resistance, screw you Mueller, screw you #nevertrumpers!! Classic!!

notamemberofanyorganizedpolicital in reply to ssns4ever. | February 27, 2018 at 2:26 pm

Enough of the insane #ResistPants!

Whether intended or not this is also a great catalyst for the crazy-train riders like Congresswoman Maxine Waters. I expect more breathless impeachment cries from her and others like her now that he pretty much poked her in the eye.

MSNBC will cement their ratings glory with this, too. CNN may need some panic medication, however. Their efforts to be 24 hour get-Trump isn’t working so well.

President Trump is the perverbial Bull in the China shop. This announcement will make his enemies even more unhinged to the average American voter that he will look sane, likable, reasonable and acceptable in comparison. What a perfect strategy.

notamemberofanyorganizedpolicital in reply to natdj. | February 27, 2018 at 3:09 pm

What a surprise! I am flabbergasted!

He his a narcissist. My god, people have to listen to him whether they like him or not. Besides, he likes to campaign more than he likes to govern. So why not announce he is running again and then he can do the things he really likes to do.

I will mostly be surprised if he goes away after a sound rejection.

The idea that this demoralizes anyone is a pipe dream. If Roy Moore can be defeated, Trump is anything but a lead-pipe cynch.

Have you ever counted the number of times “I” was/is used in any Obama speech? Both 44 and 45 are highly narcissistic. Only one is more polished at blending it.

Morris Jr. come on, Obama is not President now. You should not talk so fondly of him.

I love it. Trump announcement is the ultimate troll to the Uniparty.

I think the Dems have provided so much material to hang themselves with. If Trump used the Florida massacre to promote mental health issues (which is a huge problem and probably affects 90% of the libs) and the 63,000+ opioids annual deaths to drive the gang/crime rate he is going to kick butt. Even if Trump doesn’t win re-election, it will be another pop-corn show worth watching. Game on.

Remember the Dems/Uniparty had 8 years to give the middle class and small business a tax break. The theme of Crumbs for the middle call is going to haunt the Dems. in the 2018 and 2020 elections.

If President Trump has done nothing in his presidency and will continue to nothing, you have no worries then until 2020. As for Moore, it wasn’t a crushing defeat. The GOTV helped Jones.

Nor did he have a crushing win over his opponent in 2012.

So,your comparison is not apt at all.

I see no reason to argue predictions since they were wrong in 2016.

But Moore motivated a lot of democrats, especially black, to come out. They didn’t show up in 2016.

A loss in Alabama doesn’t worry you? Hey, I hope you sleep really well in the next 3 years. I wouldn’t worry about a thing.

The motivation garnered a slim victory, about the same spread as when Moore won in 2012. So, it was more party infighting over who should have been the candidate. Maybe you should be concerned about the rust belt as Trump was and Clinton was not. Why wasn’t Clinton by 50? Wow, those Russians are good! They affected the election by 50 poi.. oh wait, the indictment stated that Russian interference had no effect on the election.

Also, I am happy that people were motivated to vote to show they were not disenfranchised.

This no surprise to me. Remember Trump filed out the necessary paperwork the day he was inaugurated. What this does, is show how brain dead the swamp creatures in this country really are.

I believe President Trump already submitted a trade mark request for “Keep America Great” for the next campaign.

The Democrats keep piling everything they can hallucinat up on Trump, and are worse than reprehensible…
They don’t realize Trump lives to fight.
He loves it!
It is his hobby… jerking them about.
Somehow, I appreciate him more each day.

My question to Mr.President,with his take on the Constitution and particularly the second and fourth amendments. Just who he thinks his likely voters will be,oh yes perhaps the resistance will win the election for him.